On Saturday I left the choice of parkrun up to Dad, so we decided to meet at Ellenbrook fields. I hadn’t left particularly early so by the time I parked I had time for a quick warm up jog around the streets (basically going the long way around from the car park to the start).

As I walked in I saw Lynne, one of our regular volunteers, and mum to Danny Norman (from With Me Now/ parkrun show podcast)- he had mentioned it was her birthday this week so I stopped to have a quick chat with her, before seeing Dad and Tony locking up their bikes.

Dad decided that he wanted to run on his own as he wanted to work on his fitness a bit, and if we run together I am slower so it isn’t such a workout for him.  I decided I would try and keep him in my sight for as long as possible, and I managed it for around the first mile.

I was wearing a long sleeved top over my t-shirt but I soon warmed up, and the beauty of Ellenbrook Fields is that you do a small loop of about a mile, which brings you past the finish area, before you head off for a longer loop. As I was running I took the top off, tied the sleeve and then as we ran past the finish area I briefly slowed to loop it around one of the fence posts. 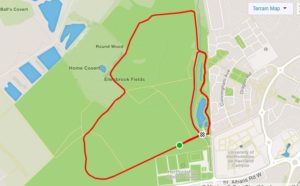 As I was running I overtook one of the runners from my club, and she is normally a fair bit quicker than me, but of course you never can tell because she might be running slower than usual. I did feel like I was going quite fast, but I also felt OK, and could speed up to overtake people as I came across them. I’d worn my old road trainers in case it was a bit muddy (I couldn’t wear my trail shoes because I hadn’t cleaned out the mud from last week) but the ground was OK- fairly firm and although a few bits of mud here and there, no huge puddles to avoid or anything.

The final km is along a runway and I can make the mistake of speeding up too soon, as you feel closer to the finish than you actually are, so I told myself that when I reached the start area, I would speed up. As I reached that part I could hear someone coming up behind me, breathing really heavily, so I decided to try and speed up and try to stay ahead of them. I ended up speeding up and was so close to catching the lady in front of me, but I was within a metre or so of the line and it felt rude. As she reached the line, she stopped dead and I nearly crashed into her! She mumbled something but didn’t move (and the funnel is a good few metres long) and was fiddling with her watch- I should have overtaken her after all! As I walked to collect my token I stopped my watch and immediately got a notification on my watch saying new record. I then saw that my time was 26 something, which I hardly ever manage (I’ve managed it 5 other times), but I couldn’t remember my pb so it was a long wait for the email to come through!

I asked Lynne if I could have a picture with her (in her cow bob hat- something that her son isn’t a big fan of) and we chatted a little longer before I met up with Dad and Tony.

I then went over to my parents and Mum cooked us pancakes, and we then watched the Watford match (they had taped it from Friday as they had been out)- it was near the end of that when I received the text and email confirming a course and all-time parkrun pb of 26:18! It beats my best Ellenbrook Fields time of 26:33 set in April 2017, and it also beats my all time pb of 26:29 set at St Albans way back in November 2013!

But the best thing? My penultimate number for stopwatch bingo! The final number I need is number 17 (eg a run finishing with 17 seconds). 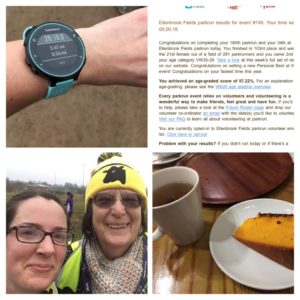 After heading home and having a shower, we walked into town and decided to have some cake to celebrate. There is a lovely looking cafe in the town centre, but we have never been to it, because either I have made a cake, or we have John Lewis cake vouchers to use up, but this weekend I didn’t have anything left over, and John Lewis are a bit more stingy with the cake vouchers now (you used to get one a month, but now one is valid for 3 months). Anyway, the cafe had so many amazing looking cakes, all made on the premises, as well as loads of tasty sounding wraps and sandwiches. I went for a peppermint tea and we shared a piece of orange and chocolate cake which was delicious. 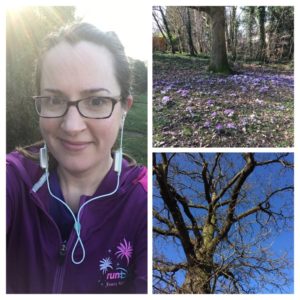 On Sunday morning I headed out for 10 miles, keeping it easy with two 5 mile loops (I have learnt the 5 mile loop now). It was so gorgeous out there and I wished I’d worn my sunglasses.  My legs did feel heavy, but after running so fast on the Saturday that wasn’t a surprise. Hopefully it hasn’t negatively impacted my training at all as I did complete the run and felt fine. I saw so many signs of spring including a lovely carpet of crocus flowers in some woodland near home.

I’d made some porridge the night before because I knew I would fancy something quick when I got back- oats, chia seeds, cinnamon and raisins soaked overnight in almond milk, cooked for a couple of minutes and then topped with almond butter (which is so amazing) and a little extra milk. Plus of course some tea (Honey, I’m Comb). 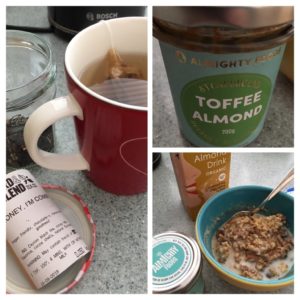 Then it was on to enjoy half term!

Do you get pb’s very often? Out of 185 runs I have managed 13 pb’s (and some of those are course pb’s and not overall ones, because I’ve run at several parkruns than once). If Dad and I chat to a new runner at parkrun we always tell them to start out slowly, so that they can chip away at their time each week, whereas my first parkrun was a 5k attempt for Jantastic, so I ran 27:12 which still now would be a speedy time for me!

8 thoughts on “An all time parkrun pb and celebrating with cake!”