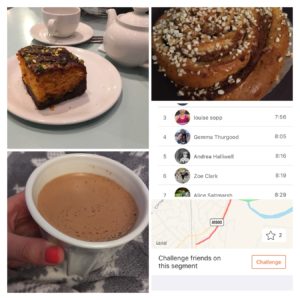 Sunday night finished with a hot chocolate (the velvetiser does make amazing hot chocolates), and then on Monday after work I met Andy in town and we had our free cake at John Lewis and a browse around the shop. On Tuesday the plan was for a run, but when I got home Andy had just given the bathroom another coat of paint, so I couldn’t have a shower until 10pm- I didn’t fancy running and then being all sweaty for ages so we had a long walk instead, and I had a quick shower (no hair wash) straight before bed.  I’d had a sore shoulder so after the walk I did a 15 min yoga video on you tube, plus a bit of tennis ball rolling, and it helped so much. I must remember it more often!

The conjunctivitis cleared up in one eye but then it appeared in the other eye (I thought I was being careful about handwashing and so on, but apparently I rub my eyes in my sleep so I stood no chance). I was a bit fed up by the end of the 5 days of drops per eye because whenever I did the drops, some of the liquid would go down my throat and they tasted absolutely vile. (No lasting damage from the chilli powder thankfully!).

One day I got a notification saying that someone else had taken my course record on a Strava segment – I didn’t even know that I had the record! I’ve not run up that road for ages as I used to run it with the midweek OH lady club runs, so I probably won’t claim it back. It does surprise me because I’m not the fastest runner- maybe they are just not on Strava!

Wednesday night I was back at yoga- I’d missed weeks because of meetings at work and it isn’t on in the school holidays. The people in the class who’d been last week were talking about the previous class and how much they ached after, so the class was tailored to be another tough one! We did a lot of holding poses for a long time, and by the end of the warrior poses (imagine holding a lunge pose for ages) my legs were properly shaking! I managed to  balance in the crow pose for a bit, and the final relaxation was very welcome!

On Thursday I finally managed a run- it was raining but with the new download of With Me Now (my favourite parkrun podcast) it didn’t seem quite so bad, and my 4 mile route turned out to be 5 miles so it was lucky that I was happy being out there. Andy had been to London for a meeting, and so had gone to the amazing Swedish bakery in Covent Garden and picked us up a couple of cinnamon buns- they are totally amazing.

On Friday I was home relatively early so we had a nice long walk before watching Free Solo- honestly I could not have watched that in the cinema- it gave me sweaty hands just thinking about some of it. It was a very interesting film, and did make me want to go back to Yosemite, not for any sort of climbing though! 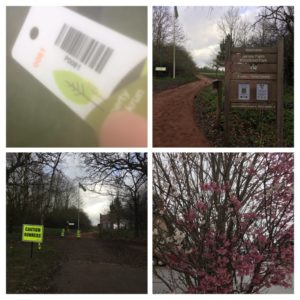 On Saturday morning I parked outside my parents and then ran to Jersey Farm parkrun, where I had planned to run then sort tokens. The rain took me by surprise as I didn’t even have a coat with me (I didn’t want to carry loads of things on the run there/back).  I had a lovely time chatting to lots of people before  it started, but when I spoke to the RD he told me that they sort them in the cafe afterwards. At Ellenbrook and Panshanger there isn’t a cafe (just coffee vans) so it’s done by the finish (which means as soon as you finish running you can start sorting them, and then finish the last ones as the final runners come in), so I felt rather anxious about this sort of situation when I don’t really know anyone. I enjoyed the run and persuaded myself that getting out of my comfort zone was good for me, and that I would enjoy visiting the cafe (it’s the gorgeous Heartwood tearooms where I’d been for breakfast with my brother before).

After finishing my run I stood and chatted to a few runners, and helped pick up signs that were blowing everywhere in the wind, but the rain got heavy so they told me to go on ahead as I was getting rather wet. I jogged the half mile or so to the cafe and ordered myself a tea and teacake (thinking it would be a smaller option than pancakes)- well it was huge!  I’m not sure the picture really conveys how big it is! I had a slight panic when someone at another table asked if they took card- I was assuming that they would as all I had with me was my phone- I keep my debit card and an emergency £5 in the case- as I thought I’d be going home for breakfast…. thankfully they did- I was rather relieved as I was eating my tea cake at this point. 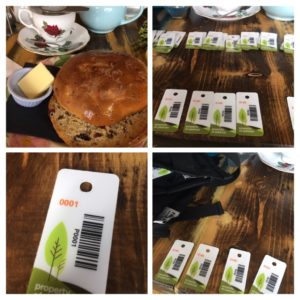 After a while the RD turned up with the tokens, so I sorted them into tens, then put them in order back onto the cable tie. One of my colleagues happened to turn up for breakfast with her husband, and was trying to work out what I was doing, so I explained it to her, and then at another table a couple of parkrun tourists were having their breakfast (one of whom writes a blog about all his parkrun tourist adventures), so we chatted for a while too. It was really enjoyable (of course- what was I worried about?). Of course I had to take a photo of token number 1 as I’d not stand a chance of getting one in the wild!

However, the run back to the car (around 1.5 miles) wasn’t quite as comfortable being full of tea and teacake!  I’d happily do this again for Jersey Farm parkrun, and next time I’d know to park a little closer to the cafe to make the walk back to the car a little more comfortable. 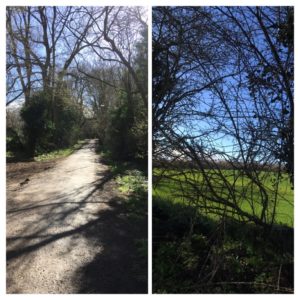 At least by the time I left the sun had come out. In my results text I found out I’d got a course pb too- 29:51- a successful morning all round (and for those who like the running challenges, I increased my p-index to 4, meaning I’ve run 4 or more times at 4 parkruns).

Where does your parkrun sort the tokens? Are you a teacake fan?  Sometimes it’s the only veggie option that isn’t scrambled eggs, so luckily I am quite partial to one. Have you seen Free Solo? (And did anyone else think for ages that it was some sort of Star Wars film?)