So after running with Dad at Jersey Farm parkrun on the Saturday, I decided to have a 6 or 7 mile run, as the following week I was doing a 10K race so thought a medium run at a slightly faster pace would be more sensible than a long plodding run.  Despite just getting new shoes, I opted for my old ones as I didn’t think I would be wearing new ones for a race, just in case. 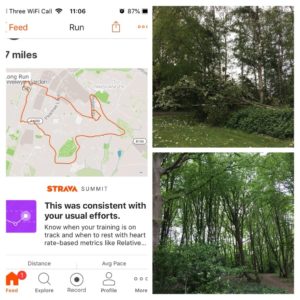 In the end I did 7 miles, and then after a shower was ready to watch the London marathon on TV (I taped it so I didn’t need to rush back and could fast forward the bits I wasn’t so fussed about). Annoyingly when I pressed play, the women’s race had started but the start hadn’t been recorded (not sure if it started before the coverage started?) but I really enjoyed watching the races, especially Charlotte Purdue and Callum Hawkins. I still wouldn’t want to run it myself though- those crowds make it look so noisy and stressful. 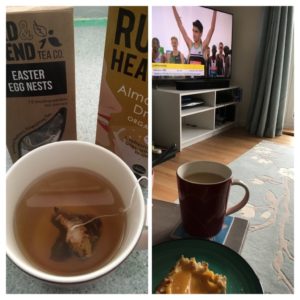 Later in the afternoon we met Andy’s parents at the garden centre and picked up a few bargains for the garden. 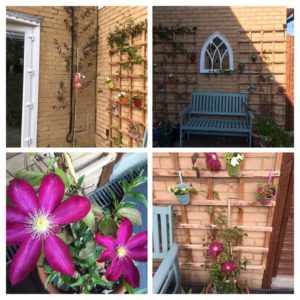 Monday was the usual rest day and so we had a walk after school, and then Tuesday I went out on a 4 mile run in my new shoes- feeling comfy but I needed to fiddle with the laces as they weren’t feeling quite right.

On Wednesday when I got home I remembered that as it was my birthday the next day, I needed to bake something for work- not sure how that had slipped my mind! I walked around to Morrison’s to pick up a few ingredients, started making brownies, headed to yoga (a good focus on hips which is always much needed) and then finished baking when I got home. I think I finished baking them at about 11pm! Work were happy anyway- one batch of pb&j brownies, and one batch of chocolate orange brownies. 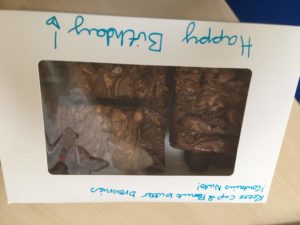 Someone at work baked me some peanut butter brownies- how amazing and thoughtful!

I actually get a bit anxious on my birthday when I have to go to work because I don’t like people making a fuss (when we got married I sent a quick message before I drove to work, the plan being that people could get over the excitement and then be normal once I arrived… who was I kidding?). The people I work with are lovely, and I was given some lovely flowers and gifts, including the book of Totoro (one of my favourite films)- I’ve been reading it and it is such a lovely change from the usual detective books. We went to Starbucks for lunch which is always a treat too.

When I got home Andy was at the cinema (this has been arranged and he knew I’d want to have a run) and it turned out I needed to pick up a parcel from the Post Office, so I headed out on a run, with a bag so I could put my parcel in it on the run home. 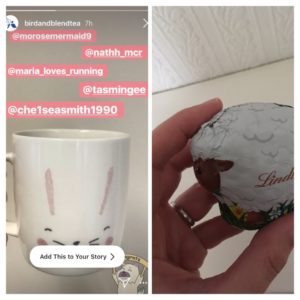 It turned out to be a parcel from Bird and Blend tea co – I’d won a mug and some carrot cake tea on Instagram! What perfect timing! (I had a cup of tea along with a little chocolate lamb I’d been given). 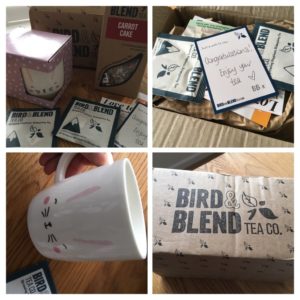 They had included some samples too (they usually do if you order online). They always include little handwritten notes which is such a personal touch. As a side point if you order online there is a space for comments, and I usually say something related to their tea- last time I asked about their rooibos matcha honey, as they used to sell it and it was gorgeous, but they don’t stock it any more. They replied in my last order to say that they might bring it back. These little touches help make them such a great company (and I’m not sponsored by them or anything, I just love them!). 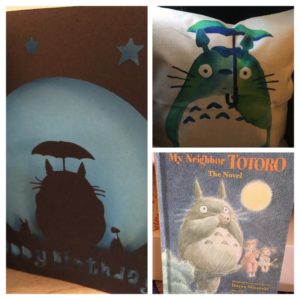 Anyway, once home (and dried off as it rained a lot on my run)  it turned out I had a bit of a Totoro theme as Andy had got me an amazing silhouette card and a cushion, plus tickets to see the Manic Street Preachers in a few weeks time.

On Friday we were heading to Bristol after dinner for the long weekend, and as I’d had a busy week I hadn’t packed anything. I left work fairly early, and when I checked the traffic it told me 45 mins to home (it should be 30-35 mins really during rush hour)- there was clearly an awful crash somewhere as everywhere was gridlocked- I put the satnav on my phone as it keeps updating with the quickest route- I finally got home 2 and a half hours after leaving work. Not good! Thankfully Andy was driving to Bristol so I sort of snoozed in the car as we didn’t arrive at our hotel until about 11.30pm.

I shall save my Bristol recap for another day.