Two weeks ago on Saturday I didn’t go to parkrun as I’d fallen over and was limping around (when you have to go up the stairs one at a time, going to a running event isn’t a good idea). We’d planned to head to RHS Wisley on the Saturday anyway, so we drove down late morning. 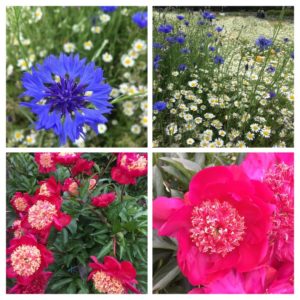 It was a lovely place to wander (limp) around, with beautiful flowers, some amazing carvings, and some test beds where they try out different types of the same plant to see how they cope with various weather conditions. 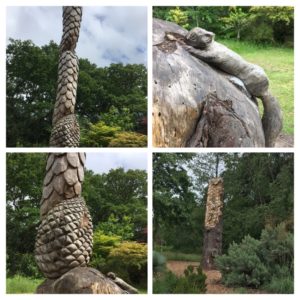 After a few hours of walking my knee was really throbbing so we went to the cafe. Andy wanted a piece of cake and I fancied a scone, and after paying for all of our bits, the lady told me they had no cream, but she had charged me for it. I thought she’d ask me to put my card back in and refund it to me, but she told me to “hurry up and choose” and it turned out she was giving me another cake instead. I clearly dithered too much, so she put a brownie in a paper bag and told me it was the best thing there. Something to save for later.

We walked around the big glasshouse, and along by the river to the bird hide (had a great view of a woodpecker feeding), and then headed to our hotel for a bit of a rest before walking over to the cinema to see Rocketman. I really loved this film- I found it very emotional, but I thought it was done really well- no rose tinted spectacles looking back on the past.

As we’d gone to an early evening screening, we then watched a bit of TV (the Isle of Wight festival, and then some Friends) while I propped my knee on a cushion to try and make it feel better.

On the Sunday morning we drove to Windsor for a wander in the sunshine. 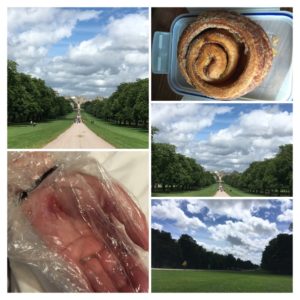 Windsor, Gail’s cinnamon roll for breakfast, using a shower cap to keep my hand dry in the shower)

It turned out there was some sort of triathlon event going on, so we saw loads of people wandering around in wet suits. It was a beautiful day, although as soon as the sun went in the breeze made it chilly, and you’d put your coat on and then the sun would come out and it would be baking!

That week I would have had a few runs in the evening, but I was not even walking properly on it until the Wednesday so that of course was not a good idea. I had signed up for yoga and nearly didn’t go, as my hand was still a little weepy (I was keeping it covered at work to stop germs getting in), but in the end I decided to go and see how I got on. It was a summer solstice special, so we started off outside, focusing on our connection to the ground (rather damp and muddy- the teacher had brought a towel so we could wipe our feet when we went back inside). We didn’t do too many downward dogs and I could stay on my fingertips on my left hand for the ones we did, so it was OK. The most uncomfortable pose was child’s pose as my knee was still a little swollen.

I went out on a few gentle walks in the evenings (got to keep the 10,000 step per day streak going) as I didn’t want to stiffen up. I thought I’d manage a run on Thursday but it was still sore, so I decided to tail walk at parkrun on the Saturday and then I could see how I got on and give it the extra few days off. 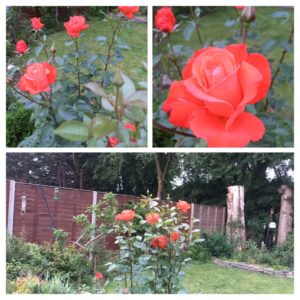 I spent a few evenings pottering in the garden. We have a rose and it really appears as if it is luminous- I think it must have some sort of pigment that reflects UV light (or something similar) because especially as dusk it just appears to glow, and is so much brighter than any of the other flowers of a similar colour.

Which films have you enjoyed lately?

6 thoughts on “Limping around RHS Wisley and seeing Rocketman”