A couple of weekends ago I realised I was about to celebrate my 200th parkrun. Now, I know it isn’t a proper milestone, but seeing as my 100th was well over 2 years ago and I still have over a year until the proper 250th, I decided to have a mini celebration. There are still a few local-ish parkruns that I haven’t been to (within an hour drive) so I messaged my dad to see if he fancied coming to Milton Keynes, to the one at Willen Lakes. He agreed, and also messaged his cousin, Brian, who lives in MK. We actually managed to get Brian into parkrun, although it was a misunderstanding as we thought he already did parkrun, but in fact when we met up with him at Linford Wood a couple of years ago, he’d been the week before on a “reconnaissance” trip.  He is now a regular there, and has done some tourism- he visited us at Ellenbrook Fields once, and he’s been to a few others when staying with family. Anyway, Brian agreed to meet us there as he’d not been to the Willen Lakes one yet. 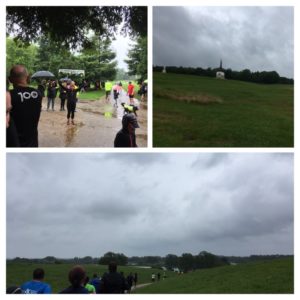 It was a miserable day! Raining fairly hard, breezy and just rubbish. We all sat in one car in the car park until as late as possible! Then we found a tree to shelter under before the run briefing! I wasn’t sure from the map where the run started, as it wasn’t by the lake, but it was a very short walk from the car park and very easy to find- lots of runners (412) even on a rainy day. There were a few real milestones of 250 to be celebrated, and then we were off. 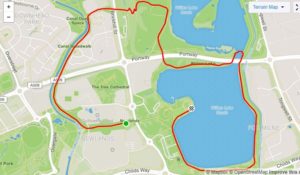 I loved this route- in fact we all did! We ran it at our own paces and met up at the end. It was a one lap (well, a point to point) which I always love, and it was so varied, passing the lake, the canal, through some woods, past the peace pergola, up a sort of zig zag path- you were constantly turning and seeing new scenery. 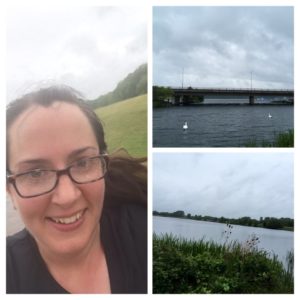 It was stinky weather though- I didn’t bring a cap as it was only drizzling at home so my glasses were constantly needing wiping from the rain.

I managed a good negative split with 9:38, 9:05, 8:48, 8:03 which I was pleased with. Towards the end I saw a lady and her son wearing matching leggings, so I commented on how I loved them, and she told me it meant he was easier to spot- good idea!

I have run around these lakes before as the Women’s Running magazine 10k race is around Willen, but it was in different directions (they do two laps of the lake, starting and finishing by the hotel) so at times I was trying to work out where I was compared to that route. 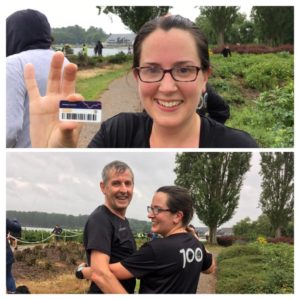 Dad had finished a few minutes ahead of me, and decided to try and take a photo of our backs (as we both had our 100 shirts on, to total 200) but it didn’t quite work out! 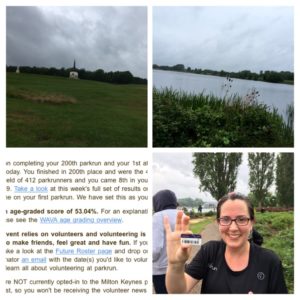 When Brian finished (shortly after me) we all changed out of our sopping wet clothes and went for a hot drink in the cafe.

As Brian couldn’t stay long we soon drove back home, where Mum made us pancakes and my sister, brother in law and niece were around too- it was such a good start to the weekend.

How do you celebrate milestones? My mum is already planning what cakes to make for my 250th even though it’s over a year away! Which milestone do you have coming up?