On Friday after work I was meeting a friend at The Waffle House. The residential school trip was due back, and the coach blocks the exit to the car park while they all unload, so I left work as soon as I could and had a lovely walk through the park to the cathedral and back again.  I saw so many ducklings and goslings. 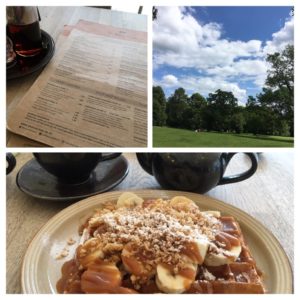 The time also allowed me to decide on my waffle of choice (my friend always knows what she is having, and in other places I usually do, but I find it so hard to choose here…)- this time it was a banana flapjack waffle, which is a waffle with banana, toffee sauce and flapjack crumbles. 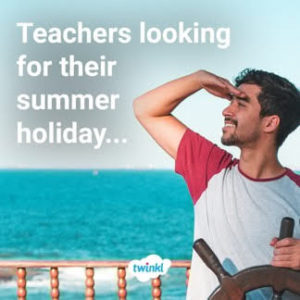 This was on a teaching resource website (twinkl) and and that point we had 4 (my friend 4 and a half) weeks to go with what feels like a million things to do (moderation, assessment, data analysis, transition prep and meetings, sports day, school trip)- we both needed the sugar to keep us going! My friend is moving away (sad face) so I shall miss our regular catch ups- this was a fab way to spend a Friday evening.

For Saturday morning I had volunteered at Westmill, which is a lovely but small parkrun close to Ware, in an activity centre. I think I’ve run it 3 times before, and been a marshal once. I didn’t think my dad would be around as he was up in Birmingham doing a tennis tournament, but he came back on Friday night and said he’d come over and run it. I then offered to make breakfast- any excuse for baked French toast! So my mum and dad met me there with Mum watching and chatting to everyone at the finish area, while Dad ran it. 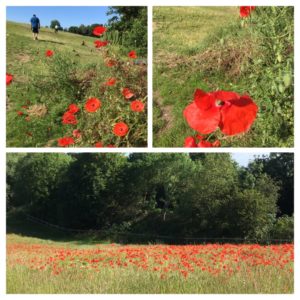 The poppies at Westmill looked stunning

When I got to Westmill we were directed to park in a different car park, and the start was in a slightly different place to when I’ve been before. It is still just under 2 laps, but the start/finish were closer to the car park. As tail walker I was asked to pick up an IKEA bag as I went through the finish area after my first lap, and pick up all the cones. So on my first lap I looked out for the cones, and also chatted to a few of the runners/walkers at the bac (including one lady who had missed the start and it turned out was her first ever parkrun- I didn’t get her name so I wasn’t sure if she finished as she was tempted to just do the one lap).

Now, I’ve been tail walker at Ellenbrook Fields and St Albans, (where you don’t collect anything as the only signs are ones held by marshals), and Panshanger, where you have to get a few of  the laminated arrows and make sure that you shut the gates. Westmill was on another level! Dad had run past me on his way to the finish, so as I got the bag he came over and said he’d  come with me on my second lap.  I am not sure how I would have managed on my own. There were so many cones (the little ones we have at school for PE, but also large orange cones, arrow signs, big solid plastic flags sunk into the ground…)- in the end Dad carried the bag and I carried the things that would not fit in the bag. Every now and then we had to run to make sure the back runner was in sight (because the tail walker should be there in case of any issues too)- it was hard work! I am not sure I would have managed to carry all the equipment on my own- I think it was a 2 person job for sure! 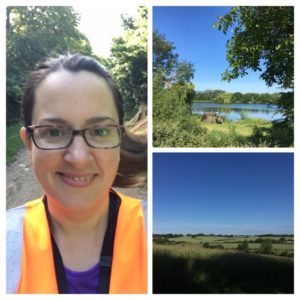 As I finished I put the bag down and went through the finish funnel- the timer beeped and the guy with the tokens said to me “you would have been number 88”, so I said to him “well, I am number 88”, and after what felt like a very long pause, he gave me the token. The first time I was tail walker I didn’t take a token so it still annoys me that I’ve done one more run than shows up on the results, and of course the point that no-one finishes last because there is a tail walker at the back is also an important one. parkrun 201 done. I was very happy as I hadn’t run since falling over (not even the daily mile at school) and when I did have to run to catch up, my knee felt fine.

Mum and Dad came back for breakfast, and my brother also came over (he hadn’t run as he was playing football in the afternoon).

I did a bit of baking later on- this was a raspberry bakewell cake from the Lucy Bee website. 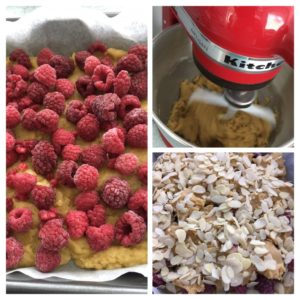 On Sunday morning I was up early for a long run. I was starting to worry that I hadn’t run a long run for a while and the 10 mile was creeping up on me. I would not be racing the 10 miles, but I don’t want to find it a huge struggle. The bruise on my right shin was turning more yellow, but the swelling was all gone and they felt much better. It was pretty hot so I opted for shorts- the scabs did make me feel more self conscious than usual about my legs/ knees, but it was fairly quiet where I was running. 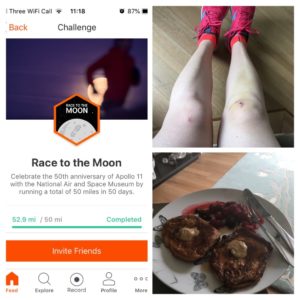 I did 8 miles of loops near my house, meaning that I could head back home if I felt like I needed to. They were super slow (around 12 min miles) but I didn’t want to push it and because my knee still felt sore if I touched it, I didn’t want to make it stiffen up.  Also I hadn’t run for 11 days so my muscles were going to be sore too. There were a few bits of brioche left over so I made some French toast when I got home. I also got a Strava badge- Race to the Moon (running 50 miles in 50 days to celebrate 50 years since the moon landing).

Then we were off to London as for my birthday I’d been given tickets to see the Reasons to be Cheerful podcast do a live recording. We had a wander around London (got an iced chai in Bird&Blend by Borough Market) and walked along the river. 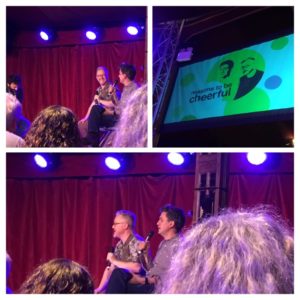 The show was really good (I think some of their topics sound a bit heavy going but they are done in such an interesting and accessible way)- all about whether we should have a constitution in Britain. Ed Miliband had parkrun as his reason to be cheerful for the week (since they did an episode about parkrun he’s been a fairly regular parkrunnner), and at the end the comedian guest was Nish Kumar who was so funny.

Monday was our school trip, which is an exciting but also mega tiring day (not even having time to go to the toilet between 8am and 3.30pm shows how on the go it was), so when I got home I just wanted to sit down with a cup of tea and was very glad of my Monday rest day!

Tuesday was a 3 mile run in the muggy heat (it felt like a storm was coming to clear the air but never materialised), and Wednesday was yoga. 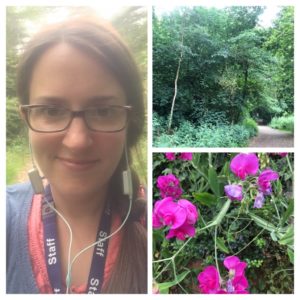 I went out on a walk at lunch time on Wednesday and saw that a few of the podcasts I’d been following had updates so it was interesting to hear the latest news. I also saw these pretty sweet pea flowers growing up a hedgerow. 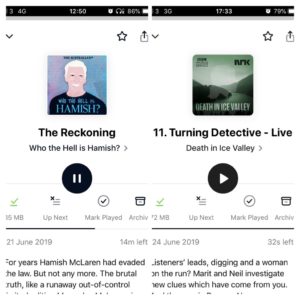 On Thursday lunch we went out for a planning meeting and as it was hot and I thought I’d fancy an iced drink, I remembered to take my metal straw with me- I’ve now got a case which means I can carry it with me without it getting dirty, and also when it’s finished with, I can just rinse the case out (I got it from Ebay here, and the case also came with  different metal straws and a cleaning brush, whereas I thought it was just the case). 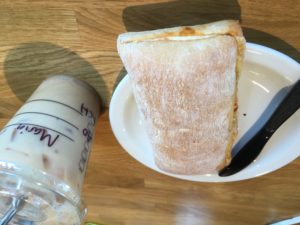 Thursday after work I went out for 4.5 miles catching up on the new With Me Now (with a bit of a local slant as a parkrun tourist had come to St Albans to do Jersey Farm parkrun (in a suburb of St Albans), and ended up doing St Albans parkrun instead)- again for my run doing a few loops in case I didn’t want to go as far in the heat, but all was good. I’d bought a watermelon and that is the perfect snack after a hot run. 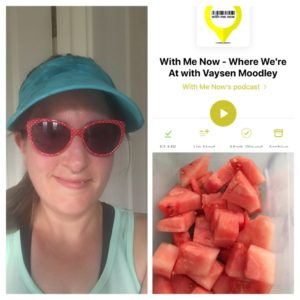 I couldn’t make the school summer fair so had offered to make some cakes, so in the evening I made 4 batches of brownies- two with chocolate chips, and 2 with raspberries and white chocolate. 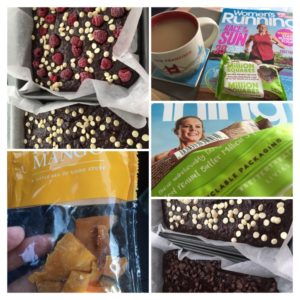 When I was buying the cake ingredients I saw this raw millionaire shortbread and had that as a post-run snack- loving the recyclable packaging too. To counteract that, I had some lovely Pret mango which is the best dried mango (the sulphites in all the other brands give me stomach ache) but probably buying it in the little plastic packets isn’t the best.

Do you like to tail walk? Are there lots of signs on your parkrun course to be put out/collected? What sort of podcasts are you listening to at the moment?

4 thoughts on “Tail walking as strength training, and back running”