So at the end of the summer holidays I got my bike out of the Shed of Doom (basically the shed that was in the garden when we moved in, we filled it with things that were in our old garage and then didn’t open it again for 3 years…) and took it to the local shop for a service. Remarkably it was OK, and we have a proper bike shed now (Andy sometimes cycles to work) so it’s been in there for a bit, with me waiting to pluck up the courage to ride it. I needed to get a new helmet (my old one was home to many many slugs and snails and no matter what Holland and Barrett say, snail slime is not going anywhere near my face), and I happened to mention this to my mum the other week. She disappeared for a bit, came back downstairs with a brand new helmet in a box. She’d seen it in Aldi and could not resist the bargain apparently, even though she can’t ride a bike. 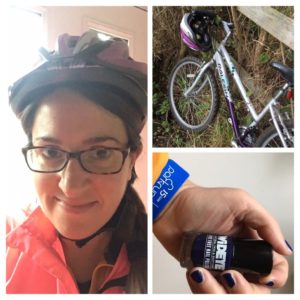 It was parkrun’s 15th birthday, and originally my brother was going to go to parkrun, and he usually cycles to Ellenbrook, so I said I’d meet him there, but in the end he couldn’t go, which meant I could go to Panshanger which is nearer to home and also a nicer bike ride. I was a bit apprehensive about it, and left plenty of time, but I really really enjoyed the bike ride- it was so peaceful and it’s much quieter than running!

I’d painted my nails (with my lovely five-free Wideye nail polish) ready for my Sunday race, and it matched well with my new flatband too. 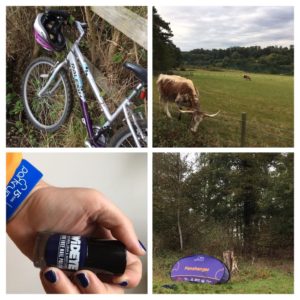 I was very pleased when running to see the long horned cattle- they have been moved so we had a slight course change (which is why you have to be quiet during the run brief even if you go all the time….) to avoid them.

My legs felt quite tired for the first mile or so- the bike ride was only 4 and a bit miles, so not that far but seeing as I hadn’t cycled in years I was using some muscles that had lain dormant for some time! 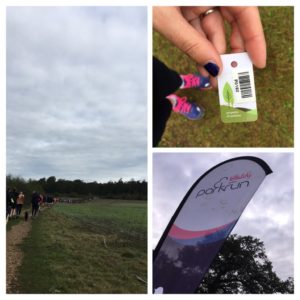 I took a few photos on the way home to slow things down a bit.  At one point I was running next to a guy who I am pretty sure was wearing a carrier bag under his top as he was rustling along and also absolutely dripping in sweat.

I finished in 31:06, and headed home fairly promptly as I didn’t want to get too cold (I had worn a jacket over my running kit). I also changed gear in the way home (I used to have trouble with the chain coming off, and I didn’t want to faff around with that and risk missing parkrun)- it was all going smoothly. 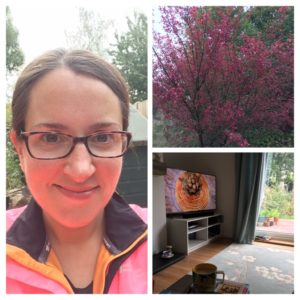 I do need to work out how to reset my records on my Garmin though, as I tracked it as a run at first (sort it out later on Strava) and so I got a record of my fastest mile (5 mins- er, that is never happening!).  Once home and showered I had breakfast in front of An Extra Slice. 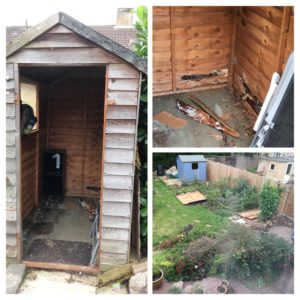 I had to help Andy take down the shed of doom (it was a bit rotten and it turned out that foxes had bashed a hole in the back so we don’t want to encourage that) before walking into town for a haircut. 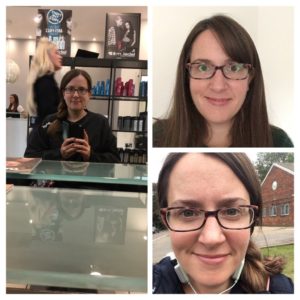 I also got rather excited because we now have a Hotel Chocolat in WGC! No cafe though (boo). I went to Starbucks to get my free drink and Andy came to meet me for the walk home. 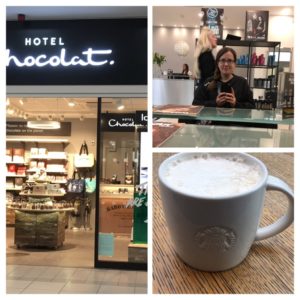 I then did a spot of baking. I’d seen these lovely “Monster workout Cookies” on The Runner Beans Instagram page, and they are just as tasty as they look  (cookies with oats, peanut butter, raisins, chocolate chips and m n m’s). 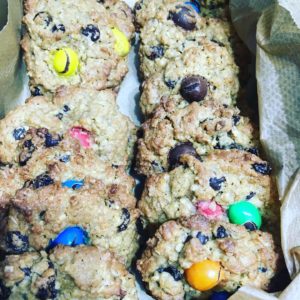 As I had a race the next morning I got all my kit out, plus a change of clothes as it was forecast to be horrible weather. I also got myself a bike lock (I just left it by the fence at parkrun but sort of hidden in a ditch, but I wouldn’t do that in many places), so I am ready to cycle to more places.

I must credit the lovely Tess @ Fitbits, because her enthusiasm for cycling has been the nudge that I have needed to get my bike out of the old shed, to the repair shop and back on the road.

Do you ride a bike at all? I used to ride all the time when I was at school and uni, as I only learnt to drive in my final year at uni, but since working a bit too far from where I live I have just got out of the habit.

4 thoughts on “Baking and Biking!”