I quite like writing posts like this as my blog is my diary, and it’s lovely to reflect on what has happened over the previous year.

For the past few years I have tried to do less races, but keep in the ones I really enjoy.  Looking at my Race Calendar page on my blog I have managed to keep to that quite well I think. 2019 started with training for the Brighton half marathon – after doing Cambridge in 2018 I had decided to go back to Brighton because I just really love it. I had a bit of an odd knee niggle which kept hampering my long runs, but thankfully it was fine on the day of the race and I finished in 2:03:38. I then signed up for the Lee Valley half, having enjoyed it a few years ago and having run the 10k the previous year. I tried to keep up with the 2 hour pacer but faded in the second lap, finishing in 2:02:00. For the May bank holiday weekend we went to Bristol and I ran the 10K, which I really enjoyed. I also did the Ware 10 miles (one of my favourite races) in July, and then trained over the summer for the Great North Run, raising money for MND in memory of a member of my family. I ran a 5k at Disney in Florida, and then back to Brighton for the 10K. I have also continued to enjoy the yoga classes- I think that they do help with running as I have had far less problems with my back and hips, but actually the biggest thing I take from it is the mental strength and calmness. 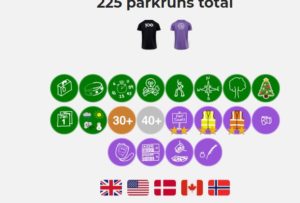 My love of the Running Challenges extension continued- I went to 16 new events, including East Brighton to complete the set of Brighton parkruns, Gedling and Colwich for the 2019 NYDD (achieving the Stayin’ Alive challenge with the final G),  and Queen Elizabeth to get my Q for the alphabet. I met Danny Norman (from the With Me Now podcast) at Kingdom parkrun, getting my K.  In June we went to Milton Keynes parkrun to meet Brian, my dad’s cousin, as it was my 200th parkrun (he got into parkrun when we met him at Linford Wood a few years ago, and now he is nearly at his 100th one!). I got token 200 on my 200th event! When Dad was working at Wimbledon I picked up my brother and we met him a Fulham Palace parkrun- this had been on our list for ages because it was where Dad grew up.  I also ticked off my final bingo number so achieved that badge at long last. In the summer I went to two Canadian parkruns, Central Burnaby in Vancouver, and Clover Point in Victoria- this also meant I earned my Pirates badge (7 C’s and an R).  Finally in November I walked around Toyen parkrun in Oslo.  For me parkrun isn’t about time, but a PB is always nice, and this year I earned a few course pb’s at Hove Prom and Jersey Farm, and beat my all-time pb twice, getting it down to 26:18 and then 26:16 at Ellenbrook Fields.  Just like previous years, the running with my dad and brother are always top of the list and the reason why it’s so enjoyable. I have reached 225 parkruns now, (a few days into January) so the lovely green shirt is in my sights for 2020. I still need an I and a Z for the alphabet, and I can’t see those happening any time soon, but we shall see.

We managed to see a few bands, going to see Manic Street Preachers in London, and then again at the Splendour festival in the summer, as well as seeing Ash there.  I was given tickets to see the Reasons to be Cheerful podcast live, which was really interesting. Not sure this counts as fun times, but we have been to London for a few of the protests too (we made it fun by going to the Swedish Bakery after…).  I went with my parents to see Mark Watson (a comedian- he’s been on Taskmaster) and with Andy’s family to see the Baseball in the Olympic Park. As a belated Christmas present, Andy’s brothers and wives (6 of us) went to see Hamilton and then went out for dinner after, and I think we have agreed to do something like that each year instead of getting gifts which will be a lovely tradition. We are both big fans of Adam Buxton (having grown up on the Adam and Joe show, and loving his podcast) and saw him at the London Podcast festival in September. We saw James Acaster live in December and he was very funny too.  With our Vitality we get one cinema ticket per fortnight (so long as you do a minimum number of steps but it’s very achievable) and we’ve seen some great ones including Rocket Man, Book Smart, Toy Story 4, Knives Out, Frozen 2, Eighth Grade, Le Mans 66, Lego Movie 2, Once Upon a Time in Hollywood (although I didn’t know the real story the fake history thing was based on until after seeing it!) and some more questionable ones (new Lion King and new Aladdin- if you are not going to change the story like the new Jungle Book did, what is the point?) like Hustlers (if they were men drugging women to rob them, would it have been seen as such a good film? I found it very strange).

Of course we have had plenty of weekends to Brighton, a weekend in Bristol for the bank holiday and Durham for the GNR. At Easter we had a lovely trip to Wales, with beautiful sunshine and really warm weather. In late May we went to Bruges and this was the first time I had driven my car abroad.  In the summer we had a massive trip- first to Vancouver, then a week on a road trip travelling around Oregon, to Crater Lake National Park and then up the coast, a week in Maui and then a few days on Vancouver Island. It was the perfect mixture of sightseeing and visiting new places but also relaxing. Then in October we went back to Florida for a week of fun in the sun, and the race of course. The end of the year was busy with visits to Brighton, Oslo and Bath, and then our trip to France over Christmas.  2020 will bring less travel and definitely less flights! 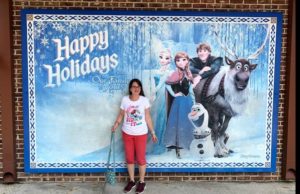 How was your 2019? Obviously on the national agenda things have been pretty awful, but I think it’s important to focus on what is going well, and also focus on things within my control because otherwise things can spiral downwards pretty quickly.

Which films have you enjoyed?  Are you addicted to the parkrun challenges? Check out the new map- I just don’t even know where to begin with it…