Following on from my 13.1 miles last Sunday, I had a nice gentle 4 mile run after work on Monday to help stretch out my legs. I felt fine until about a mile from home when I suddenly felt really tired. It was nearly light  when I got home and was just so good to think that spring is around the corner now. We were treated to the most amazing sky in the morning! 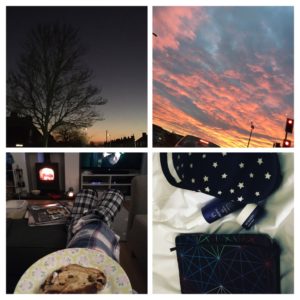 In the evenings we have been watching a few documentaries (mainly because we caught up with Wisting to had to wait to the weekend for the next one)- the first one was Game Changers which it seems like everyone has watched (if you haven’t, it’s basically about the performance benefits of a plant based diet). I would take it with a pinch of salt because I am sure they have picked the studies that help illustrate that veganism is better than meat, but it was interesting showing where the stereotypes (eg real men eat meat) come from. Those lobbyists in the US have a lot of power and influence.  Another evening we watched Kilian Jornet, Path to Everest. He is often talked about on Marathon Talk, but I hadn’t seen him in anything and didn’t know much about him. This was totally amazing- a bit like The Dawn Wall or Free Solo because what he does seems to defy what is possible.

On Wednesday I went to yoga- I always love going but always feel a little apprehensive as we might be doing handstands or headstands, both of which make me nervous. I’d downloaded the Action for Happiness app (I knew there was a website but didn’t know about the app until Emma posted about it) and just before I left the pop up said something about doing something that scares you. On the drive to yoga I decided that whatever we were doing, I would give it a good try (because you never have to do any of the poses of course).  Anyway, we did do a headstand and with help first from the teacher and then from one of the other people in the class, I briefly managed both legs up (I can get one leg up at a time). I always find it weird being upside down and trying to work out which way to push the legs and things, but the more I do it the more I will get used to it. 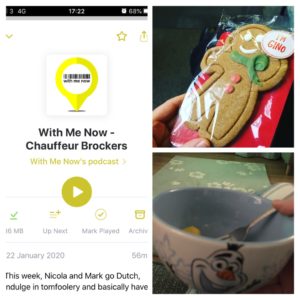 Yay fave podcast time! Gingerbread man at lunch to get me through a busy day, and mango in my Olaf bowl after yoga

On Thursday I changed into my running kit at work and stopped at the business park again for a 4 mile run. I did a few lamp post intervals and stretched at the car before driving home. I am not sure why it didn’t occur to me sooner, but stopping on my way home to run on even and well-lit pavements is just so much nicer, and means once I am home I don’t need to go out again! 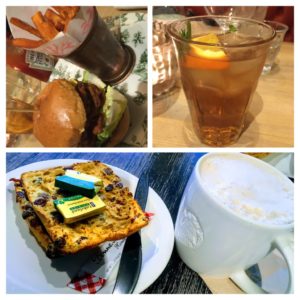 On Friday a few of us popped out for lunch, and then almost as soon as I got home we were heading out again, going to dinner at Bill’s and then to the Odyssey (which is a lovely renovated cinema in St Albans with one screen, fancy seats with tables) to see Little Women. In Bill’s I had the burger special which was a vegan tempura vegetable burger, with some added avocado which I was very glad of because it was super spicy! 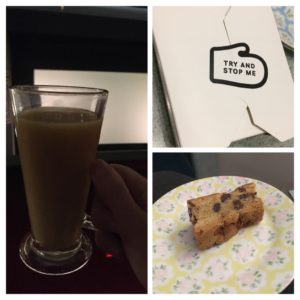 Before the film we just had time to walk around to The Pudding Stop to get something for later (butterscotch blondie to share) and then I enjoyed a proper cup of tea (well, in a glass but the person at the bar said it was bigger than a cup so may as well) while we watched the film. I loved the film. I had read the book when I was younger but couldn’t remember much (just that I really liked Jo) but I just thought it was so well done and so enjoyable. Although the man next to me kept falling asleep, and then when it finished started talking about how good it was…