We got the train down to Brighton on the Friday afternoon, so after dropping our bags off at the hotel we had time for a quick wander (pop to Bird & Blend for a latte obvs) and picked up some sandwiches from Pret for dinner- the falafel special at the moment is so good with crunchy veggies and loads of pickles. 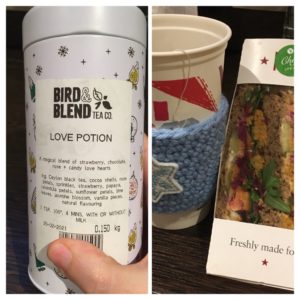 Very pleased to get some Love Potion and Red Velvet as they had sold out online.

We had seen that Stewart Lee (comedian) was at the Dome, so we had booked tickets and wanted to get there with plenty of time. I like going to see comedians but I do not want to sit anywhere near the front, and I do not want to be late! 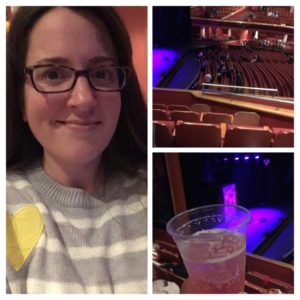 The show was split into two parts, with no support act, instead he did one show (Tornado), there was an intermission and then a second show (Snowflake). It was very funny, very off beat. 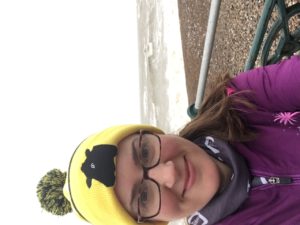 On Saturday morning I headed down to Hove Prom parkrun (after checking it was on- the previous week they had posted photos of the pebbles from the beach covering the entire prom). I perhaps should have chosen Preston Park  instead, but the prom was marginally closer to where we were staying, plus I could not decide what to wear for the half on Sunday, so I thought it would be a good test. Well, a test. 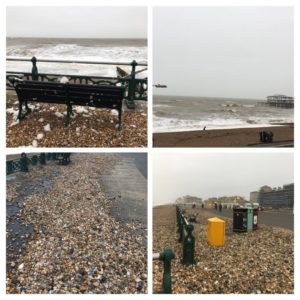 I got chatting to another tourist (well she was a local, but had the cow buff on)- she was going to be at one of the water stations in the half-  not an enviable job. The course on Hove Prom is two out and back laps, but you start in the middle, so we had half the length into the wind which was just so hard to run in, then the whole length with the wind behind (marvellous, but also sort of annoying as my ponytail kept swinging around and smacking my in the face!), then a whole length into the wind, which is when I questioned the sanity of running a half marathon, a lovely whole length with the wind behind, and then the final half into the wind. Ooof it was tough. For ages I could see the 30 minute pacer way ahead of me, and finally caught him up and went past him before the final turnaround point. 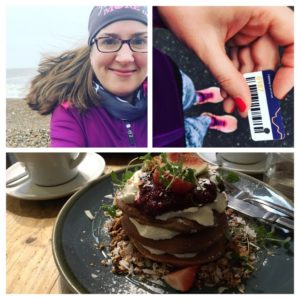 The pacer did a fantastic job, as it cannot have been easy to keep to your planned pace- my official time was 29:59 and he was just behind me. 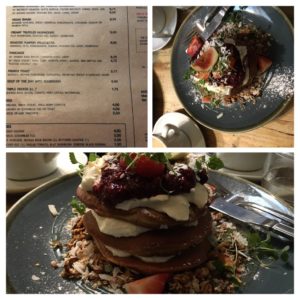 I ran back (thankfully with the wind behind me) and met Andy in Cafe Coho, for tea and pancakes, before getting showered and changed. 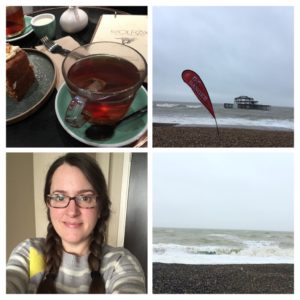 That bendy sign said “no swimming”, just in case anyone was tempted!

We walked along the seafront for a bit, but the sea spray was in the air and it wasn’t the most enjoyable walk, so we cut it short and wandered around the lanes for a bit instead. 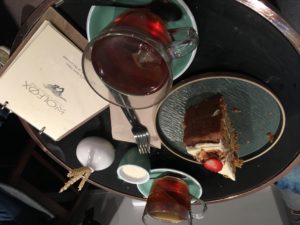 Of course we stopped for tea and cake, and then later on a B&B visit- this time for a red velvet latte which is one of their specials, and is pink! 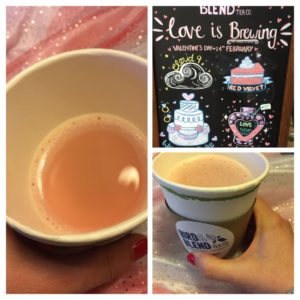 We got a takeaway pizza from Fatto A Mano (their vegan one with veggies and pesto is sooooo tasty) and then headed back out to the Dome, this time to see the Hot 8 Brass Band. Andy likes them (I had only listened to a couple of tracks on Spotify)- they basically cover pop songs, (eg Get Up/ Love will tear us apart)- they were fantastic live. I love seeing instruments being played- orchestras, bands, anything, so seeing them was great but they were so lively and engaging with the crowd. Mardi Gras but a few days early! 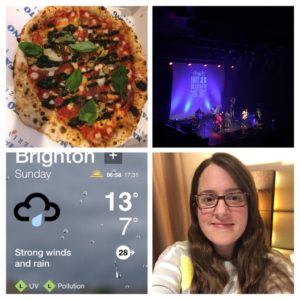 Then it was time to head back, get my kit out and look at the weather forecast! I shall save the half marathon recap for another post…

Do you like seeing comedians or bands? Best pre-run dinner?

2 thoughts on “A busy weekend in Brighton- parkrun, comedy and a band”