Last week on Saturday it was my choice of parkrun (as no-one needed to head off quickly anywhere) so I chose Ellenbrook, as we hadn’t been there since the NYDD. 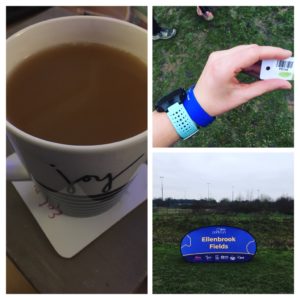 It is my “home” run really (I think I have officially changed it from Panshanger on the website), and it was just great to see so many people from my running club, people I know from the old Sweatshop running group, a couple of people from yoga…. such a community feel. Sometimes I just want to run around, and other times I feel like being more social and so this is perfect. Dad was there too but ran off ahead. I chatted to a couple of people on the way around for parts of it, and partly ran on my own. My legs felt heavy so I was surprised to see 27 something time- not too shabby! Someone was celebrating their 99th run (they are away next week for their 100th) and had bought flakes for the first 99 finishers- I was too slow for that! Once I had finished running, I headed to my parents where mum made us pancakes (of course), this time with the addition of a topping of hot apples and raisins and spices- so good.

The rest of the day was spent helping Andy do some wallpaper stripping in the hall, doing lots of work and having a walk later in the day. 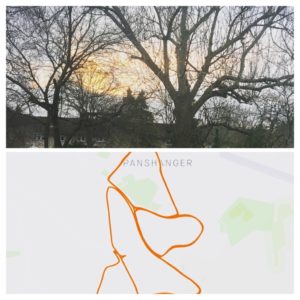 Sunday I was off for a long run- this week I did 12 miles and tried to keep the pace a bit higher than last week. I did lots of loops near home as my dad was coming around to help with the anti-decorating, so I didn’t want to be too far away. The run seemed to go well, one mile less but 20 minutes quicker than last week. 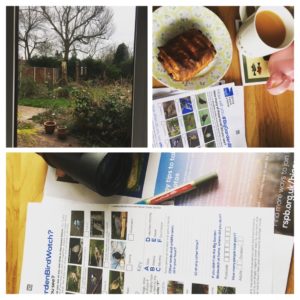 Dad came over to help with the wallpaper stripping in our hall, and then once that was finished with, I settled down to do the big garden birdwatch. I really love seeing the birds in our garden- it is very calming to sit and watch them flit about. I’ve added a couple of feeders (and cleaned the old ones) so I was hoping to see a few. The idea is that you watch for an hour, so I made a pot of tea and heated up a croissant (Dad had arrived with croissants from my mum too, and on the birdwatch website they even have recipes for biscuits to make to eat while you watch, so it’s definitely a thing!), and settled down. It was so peaceful to sit there just looking in the garden- I did see a few birds (but not all of the birds that I have seen) but just really enjoyed that peaceful time.

I had to get to the shops before they closed to get some bits for work, and then we headed to Andy’s parents for the afternoon/evening.

Do you have a home parkrun or more than one? If I’m touring I have to check which top I am wearing because I have a Panshanger t-shirt and an Ellenbrook vest!  I’ve been to probably double the number at Panshanger, and it’s closer to where I live, but with my running club being involved in Ellenbrook it does feel more like a home run. Do you like seeing birds in your garden?

6 thoughts on “A parkrun back “home” and the garden birdwatch”