I used the excellent tourist tool to work out which parkrun to get to on Saturday morning. Southwark was not far- a half a mile to the tube, a few stops on the Jubilee line and then a short walk at the other end. When I was running to the tube station, I saw a girl out running and looking at her phone, and she asked me if I was heading to parkrun. She was actually going to Burgess, and I hadn’t looked at that one so I wished her luck (I am no help with maps as you will see later on…) 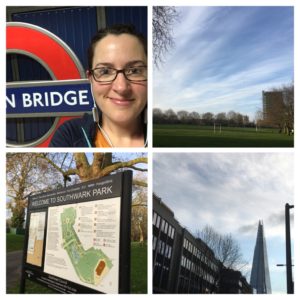 I found the park fairly easily and had a bit of a jog around as it was really cold that morning, and I didn’t have a buff or gloves or anything. The park had lots of bird boxes and lots of spring flowers peeping through. It seemed very small- it always amazes me how the lapped courses can be squashed into these tiny parks. 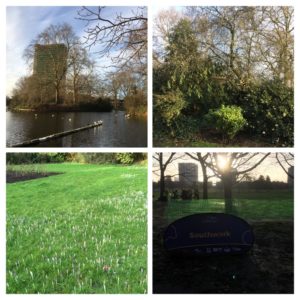 The first timer briefing was useful- the course was 3 laps but on the first lap you went to the right of a tree, and the other two laps you went around the left- you can see it on the Strava map. It’s completely flat and on nice wide paths. Just before the main briefing I noticed someone in a Dolly neck-tube (the cat from With Me Now pod) so I started chatting to the guy about touring. The main briefing was really good as the RD got all the volunteers to stand on a mound in a big line, side by side, and this seemed to keep most people quiet and listening. Then we walked around to the start and were off. There were lots of people (479) so the first few metres were a bit congested but it cleared very quickly. The laps seemed to go by very quickly too- I am not usually a big fan of laps. During the second lap the tourist (Matt) caught up with me so we chatted for the rest of the time- he had plans with his wife to go to Canada and Norway among other countries, so we talked about parkruns we had been to, and ones on our list (and how my non-parkrunning hubby needs a bit more persuading to go to places where there happen to be parkruns!). He was an RD at a fairly local parkrun too, so managed his time between there and touristing. 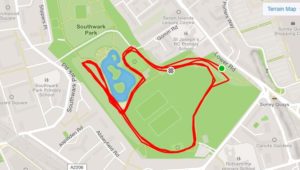 There was an out and back part of the course which is always good as you can then see lots more people ahead or behind. Considering it was a small course there were lots of marshals out too.

At the end I asked someone to take my photo in the selfie frame, and then headed back to the tube. 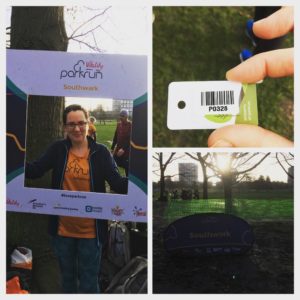 That was fine, but when I came out of the station, I must have come out of a different entrance because I was very confused, maps wouldn’t load on my phone, so it was a while before I went the right way…

I also don’t think Strava knew exactly where I was? 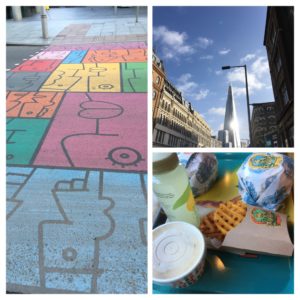 Andy had been to Gail’s to get us each a chocolate almond croissant, and after a shower we headed off for a wander around London. We went to Borough Market, then across to Spitalfields, where we bought a doughnut from Crosstown Doughnuts to share late. We then walked along the river, over one of the bridges and to the Tate Modern. We had a late lunch in Leon, then wandered back to Borough market where I could not resist a pink latte from Bird & Blend (made with their red velvet tea). 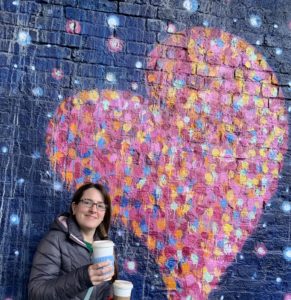 Once home we made a pot of tea and shared the doughnut- peanut butter with blackcurrant jam. I am not normally a big doughnut fan but this was really tasty. 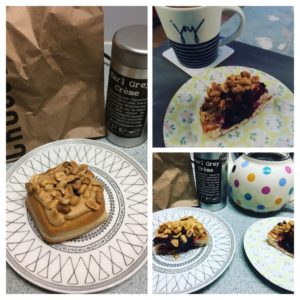 On Sunday I headed out for a long run. I wasn’t sure how I would feel after the Saturday, as I had totalled something like 33,000 steps, but in fact I felt OK. I did loops near home, as somehow that feels easier than doing one big loop, and also meant if I wanted to cut it short then I could. Once home I did some yoga stretches (including legs up the wall), showered and then had porridge and pink tea (red velvet). 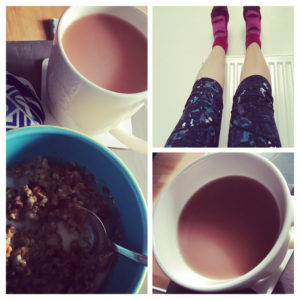 I had some work to do, so I got on with that and then later we headed out to the cinema, to see David Copperfield. Now, I did not know anything about the film- I’d seen a trailer and that was it, and I did wonder for a lot of the film who would teach him magic. (In my defence the beginning of the film is sort of the end, with him on stage about to perform, so I thought it would be a magic show). Anyway, I really enjoyed the quirky style and loved how the characters loved each other.

Do you ever totally get the wrong end of the stick with films? I remember watching La La Land and wondering when the time jump would happen, as I thought  it was set in the 20’s but the beginning was that big traffic jam. Not sure where I got that idea from (possibly just the style of writing on the poster?).  Are you a doughnut fan? I am not usually, but in Portland in the summer we went to Voodoo doughnuts and they were good too.

2 thoughts on “Southwark parkrun and a day in London town”