On Sunday morning I woke up to the sound of the wind howling! This was not going to be the glorious sunshine of 2019!

I had a hot cross bun for breakfast and then got dressed- I still couldn’t quite decide what to wear because I hate being too hot, but also the wind was very cold and I knew I wouldn’t be running as fast as normal so didn’t want to get wet and cold. In the end I wore a t-shirt and a long sleeved thin top, with my jacket on to walk down to the start (Andy walked with me so I could give him my jacket- no need to use the bag drop). I think we got to the seafront about 15 mins before the start, so no need to hang about for long and get cold. In my jacket I found a pair of gloves so decided to wear them too. My headband which was mainly to keep the wind out of my ears, kept sliding down my face because of the wind! 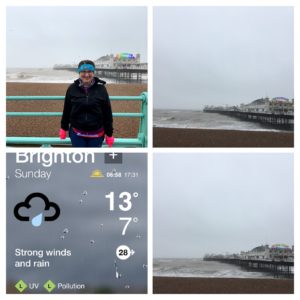 After Andy left I headed into the start pen- I was in the purple pen for 2-2.15, and I was pretty sure I’d be towards the end of that, due to the crazy winds.

I was wondering what I was doing, and regretted not bringing longer tights (these blue ones are my usual race ones, but my skin was getting cold on my legs!). 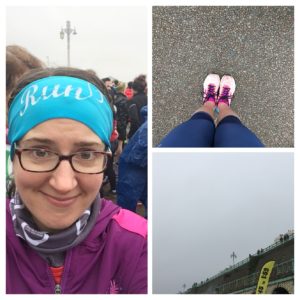 Anyway, it wasn’t too long before we were off. The route had changed a teeny bit from last year, but basically up along the coast (East) for 2.5 miles- the wind was behind me and I looked at my watch out of curiosity and saw 8.50- no way should I be running that fast (I think 2 hours is 9.09 pace and seeing as I have only managed that on a short course, my pace should be slower especially at the start!). That was the only time I looked at my watch though- I didn’t think there was any point in trying to stick to a certain pace because of the wind, and as I wasn’t aiming for a particular  time I was going on feel.

As we turned at the top and began running into the wind, it just felt like madness. The spray from the sea (or possibly a bit of rain, not sure) was stinging my face and legs, and at points it felt like you just weren’t moving forwards. At least this was downhill! I didn’t notice any of the mile markers, but heard people around me commenting on the  miles so far. At around 4.5 miles we were back by the start and heading in to the town, next to the Pavillion. When I have run it before, it’s a short loop, but this time it went further inland, around a small park (The Level?) before heading back to the coast. Here I started noticing the mile markers- we passed the 7 mile mark just after joining the coast road and this time heading towards Hove. 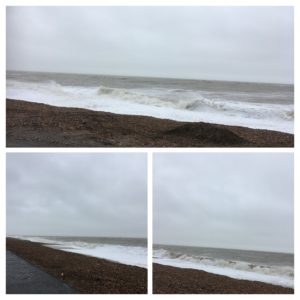 I knew this would be the hardest part  – mainly flat and into the wind- towards where I did parkrun on the Saturday, and beyond. There were a few detours around small squares, which provided a tiny respite from the wind, but it was a time to just dig in. A few times the wind pushed one leg into the other (especially if you were sheltered by a building and then ran past a road).

I kept thinking we would turn- the whole way along you could see people heading back the other way, but the road just kept on going! Kudos to all the people who were out supporting- I love running in Brighton and the crowds were still out with jelly babies and signs and instruments. Not a good day to be stood around!

Finally we did turn, with 3 miles to go (just a parkrun to go- phew) and the wind behind! The waves were crashing up onto the beach, and at first the path was right by the beach with no barriers, so the sea spray was again stinging my face and also making me feel very invigorated. At this point I ended up with the Moana song in my head (because of the wind being behind me….) and I am pretty sure that powered me through those final 3 miles. My hood kept flapping and my ponytail kept smacking me in the face (makes for an excellent race photo- there were only 2 of me in pretty much the same place) 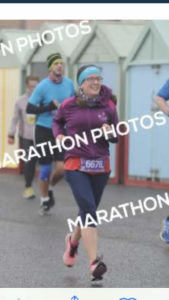 I took a couple of photos of the sea whilst running at  that point, but of course the waves don’t look very big at all. Anyway, the final 3 miles went well, with the end in sight. I felt like I was about to get a stitch in the final half a mile, but I tried to focus on my breathing and felt OK. I remembered last year I felt dizzy near the end and had to slow down and stop for a bit (it was a very warm day) and compared to that I felt miles better.

The final part was tough- due to the wind (completely understandably) they had not put up the finish gantry, so I had no idea where the finish was- it’s so hard to know when to give that final push!

When I finally crossed the line, I was very surprised  to see just under 2:05- I was thinking I would be closer to 2:15! Andy was back at the hotel so I shared my location with him, so he could track me heading back. I then had a minor panic because check out time was 12, and now it was approaching 11.45! I was given a can of water (yay for recycling),  a banana and a cereal bar, my medal and a foil blanket, and tried to fight my way out of the finish funnel. I saw some people with goodie bags but I am not sure where they got them from (Runners Need ones)- we did get a voucher with our number.  I do think they could organise this bit a little better, as for ages I was battling people wandering the other way trying to meet up with people. It’s narrow down there and not really the best- I had to run further up along the road to find a crossing point too- I had to run 1.1 miles and got back to our room at 12 on the dot. I had got everything ready and so I jumped in the shower for a two minute rinse before changing into warm dry clothes (housekeeping knocked on the door while I was in there but he explained we would only be a few minutes). Andy had made me a tea so I sat in the lobby and had that (plus some of the cinnamon roll her got for me) while he checked out. 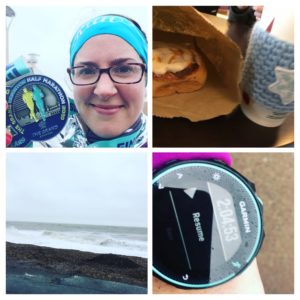 Lots of people were coming to the front desk saying that their keys weren’t working, and they were being let in, so I needn’t have panicked, but you never know! 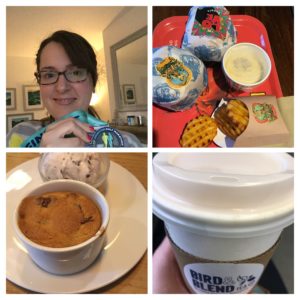 Lunch was Leon (I LOVE their love burgers and we shared fries and hummus) and then I got a chai latte for the train.  Once back in St Albans we walked up from the station to The Pudding Stop, as I was in search of an amazing sounding peanut butter and jam skillet cookie thing, but they didn’t have any, so we shared a cookie dough and coconut ice cream- pretty good.

We then walked back to the car and drove home, where I could finally have a proper shower and  lounge around for the rest of the evening.

When I looked back on Strava, despite it being one of the slower Brighton half’s for me in recent years, I got loads of Strava segments due to the wind assisting me. My final 5k was 26:48- I’d love that as a parkrun time (I think I’ve only run a couple with 26 at the start) so to manage that after already running 10 miles isn’t bad! 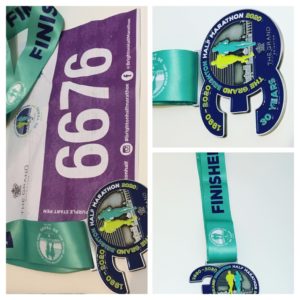 The medal was lovely too- because it was their 30th year it was shaped like 30, almost like two medals joined together. My chip time was 2:04:36

What’s the worst weather you have raced or run in? I remembering being out once when it started hailing, and another time it rained so hard that my eyeballs filled up with water and I couldn’t see- I just had to stand on the pavement and wait for the rain to ease off a bit!

2 thoughts on “Brighton half marathon 2020- wild and windy!”