I don’t know about you, but I need a routine. I am very much a planner, and I like to know what is going on, and what I am doing, so my normal job suits that because I know what I’ll be teaching each week, and I know when staff meetings are, and I have a routine with when to run after work, when to go to yoga and so on.

With that in mind, I have tried to have some sort of routine when working from home.

I didn’t think I could actually timetable my day as such, but I have come up with things I want to do each day, and can tick them off as I do them. For example each day I want to do a bit of yoga to combat the stiffness from sitting at my laptop. I want to have my run or walk outside, and also get a bit of fresh air by going into the garden. I will do a bit of cleaning each day, and maybe sort out a cupboard or tidy somewhere (even for 5 minutes, so I am moving throughout the day). I’ll listen to some music or a podcast each day because I do not want to spend the entire day thinking about current events/ reading news. I’m quite tempted to re-watch Tidying Up on Netflix, but I haven’t been watching that much TV just yet. 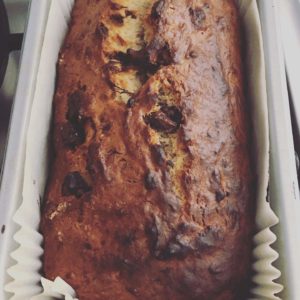 I had some brown bananas, so of course I made some banana bread- I used this recipe which is vegan (so if you don’t have eggs, don’t worry) and is the simplest recipe that I have seen. You can add dried fruit or nuts or chocolate chips… 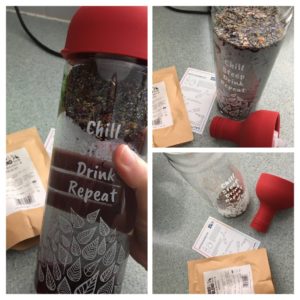 I’ve been using our cold brew bottle to make some nice iced tea to have with dinner- I think it works best with fruity teas- you just put in a scoop of tea, top with water and leave in the fridge for a few hours. This was blueberry and peach tea which is divine. 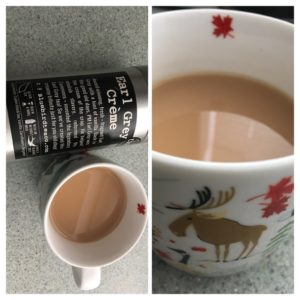 Of course, working from home also involves lots of cups of tea- going downstairs and walking around while the kettle is boiling is good to force a bit of movement. I am already wondering how I can make a standing desk because usually I don’t do that much actual computer work, but when working from home it’s pretty much all online. 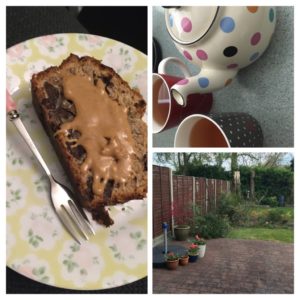 Our teapot is usually reserved for the weekend, but we’ve been having a pot at around 5pm (and watching Escape to the Chateau DIY for some pure escapism).

I’ve been getting out for a run or walk each day- this week first thing in the morning has been better, as the streets have been much quieter. On Tuesday I looked on Strava and saw that I had run 94 miles in March, so of course I went out to do 6 more to round it up to 100 for the month. 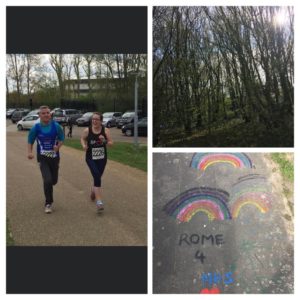 I was meant to be running the Lee Valley half marathon last Sunday, and the event being cancelled was fine, but on the Monday I started looking at the medals (I did the half in 2017, the 10k in 2018 and the half in 2019) and got really tearful because in 2017 I ran it with Dad, and it was his first half since he was in his 20’s (and after he’d had to take a long time out of running due to a knee problem)- he was raising money for MND, and it was so lovely because we ran steadily, chatted the whole way, enjoyed the scenery, and it just felt like an extended parkrun. Just thinking about it overwhelmed me just for a bit, because I love it when we run together, and at the moment that can’t happen (or even see each other). I know that in the grand scheme of things I am very lucky, but at times it’s hard to hold onto that. 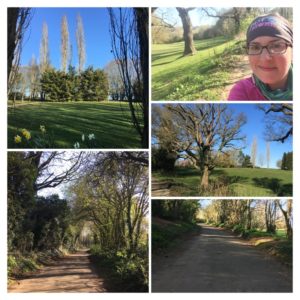 I saw a few Strava routes of local runners going on footpaths so I had a bit of an explore and have found a couple- one is a public footpath that goes through a (closed) golf course, so it was good to be out in a green space away from the roads. I think the path continues through the grounds of a hotel but I can’t quite work out where it goes just yet- I’ve got plenty of time to work it out! 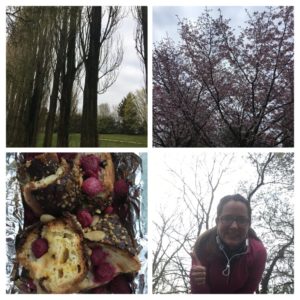 One day we had the rest of the panettone as baked French toast- I added some raspberries in there, and left it to soak overnight, baking it once home and showered for a breakfast to keep us going all day! 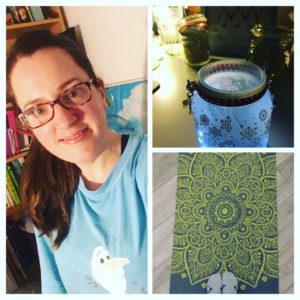 On Wednesday evening it was time for yoga, but this time via zoom. We’d had a little go last week and it seemed to work well. I lit a candle and put out my fairy lights as usually at our yoga class we have a candle and fairy lights instead of the big harsh lights. It went well, and of course it can’t replace an actual class (my inflexible muscles usually need a bit of help moving into the right places) but it was lovely to move and breathe and focus on something else for a time. 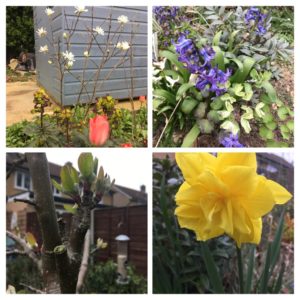 I’ve been out in the garden each day too- it’s good to get a bit of fresh air and make my eyes focus from something that isn’t a screen. I’ve done some jobs (sorting all the flower pots/ weeding/ sweeping/ pruning) but also just spent time listening to a podcast and sitting on the bench or walking around. I’ve just started Girl Taken, which is really interesting, about an ex-soldier who tried to help a migrant family in the Calais Jungle, and then spirals into something else entirely.

Andy mentioned to me the other day that we are probably saving a lot of money at the moment as we’re not going out or shopping or anything. Well, not quite seeing as online shopping is still going! Essentials such as tea and hand cream arrived this week… 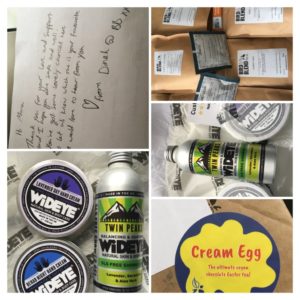 Plus a gorgeous note from the B&B team- when you place an order there is always a space to write a comment, and I usually leave them a little message and then the packer usually writes a little handwritten note on your order. One of the reasons why they are such a fab company. 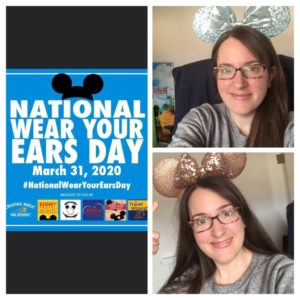 We had a bit of fun via our work whatsapp group too- as we decided we would be Team Disney, I had to share with them the National Wear your Ears Day- we had some creative entries from people who didn’t own ears (including someone holding their cat up behind them so the cat ears looked like Disney ears!). I had my Frozen ones on for the morning and then switched to my glittery pinkish ones (I think they are for Sleeping Beauty? ) for the afternoon. A big bonus for working from home!

This weekend is the start of the Easter holidays, but it is going to feel very similar to last week as I’ll be at home, I just won’t have to log on to do work during the day- even more hours will need occupying! We are going to start our decorating this weekend (finally) so I could carry on with that in the week. I think I will let Disney+ in a bit more and have a bit more escapism, as that will feel more like a holiday too. And hopefully a bit more baking, pending on what we can order with our online shopping!

If you work from home usually, how do you manage it?

Have you been tempted by online shopping? I did think I should write a list of things that I have not bought (eg the Sweaty Betty joggers that were on offer last week).

2 thoughts on “Getting a new routine going”