After my as-now standard 10k run on Tuesday morning, I had breakfast in the garden and then decided to have a go at making bagels. 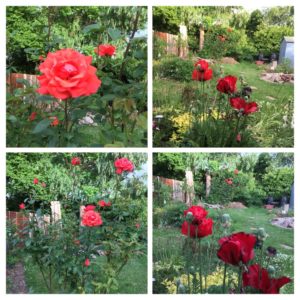 We had ordered my favourite cream cheese with our shopping (Nush stuff, made from almonds and is gorgeous) and there is no better combination that a bagel and cream cheese. 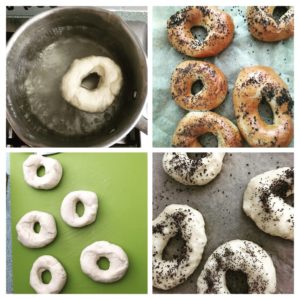 I was not looking forward to the boiling part (you poach them for a few minutes once they have risen, and before you bake them) as I had visions of the dough disintegrating into the water, but in fact it was fine.

They were super tasty, and not as hard as I had imagined so I would definitely give them another go. I used this recipe (and halved it because I didn’t think they would keep for that long after) and it was one of the simplest ones I’ve come across.

I had lots of work to do, but then as now we are allowed to leave the house for exercise more than once, we had a nice walk in the evening together once it was a bit quieter. That is pretty much our only change (I’m still not comfortable with the idea of going to a shop or takeaway or anything like that). 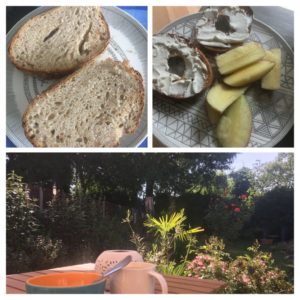 Wednesday was another day with a run first thing, breakfast in the garden and then doing more work. I was trying to get all my work finished by Wednesday so I could have the Thursday and Friday off, but famous last words and all that… Anyway, yoga wasn’t on so I made us some bread to have with soup for dinner. 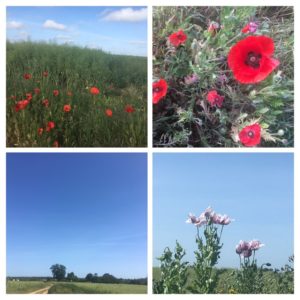 Thursday was a happy day. As I’d run to Ellenbrook fields last week and found the route OK, I messaged my dad and asked him if he wanted to meet me there, so we did. He cycled there and we met there just after 9am. We ran a loop of the fields together, chatting the whole way around. We spotted so many birds (woodpeckers, chaffinches, even a skylark hovering above the grassy field), and chatting as we ran was just so enjoyable and not the same as a phone call. Our final km along the runway (the finish of EF parkrun) was pretty fast, and then we stood around in the shade for ages after, chatting some more. I always just leave my watch running, and according to Strava my moving time was 2:17 but the elapsed time was 3:16 so I think we must have chatted for an hour after before I had to run home. 13.1 miles in total for the second half marathon of the month. 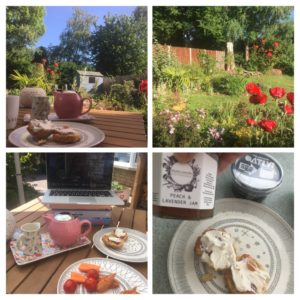 After brunch and a shower I had to squeeze in a bit of extra work (I shouldn’t have said anything about having some work-free days) before getting ready for afternoon tea. Some of my team at work had decided to do one over Zoom, so I baked some scones and prepped my snacks. I opened the peach and lavender jam from the Hitchin Lavender farm (I bought the jam last summer)- I love peach jam, so summery. Topped with a little Oatly creme fraiche so it tasted even more summery. (I also had some veggies, oatcakes and hummus- someone (even though they know I’m veggie) asked if a carrot was a fish finger!). It was so much fun to catch up with everyone and although we did talk a bit about the wider opening of schools next week, we also just chatted about everything else. Everyone is getting into gardening so it was nice to compare notes. 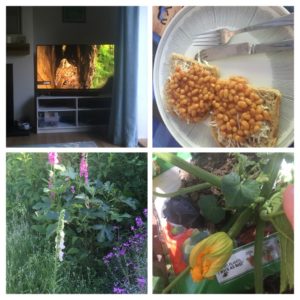 I did not want to watch the 5pm briefing (I’m finding it increasingly stressful to watch because I feel like everything is way out of my control and just not sensible at the moment) so I watched Springwatch while Andy watched the briefing.  I also found my first courgette flower on one of my plants- how exciting! We had a walk before dinner (beans + marmite + violife cheese on sourdough). Mmm.

We started watching The Last Dance after hearing so many good things about it, so that’s been good evening TV.

On Friday I did some yoga (I am so slowly working by way through the 30 days with Adrienne- I think this was Day 11!), and then had a walk to stretch my legs. I thought they would feel worse after the 13 miles, but I think as I had a long break in the long run they were actually OK. My ambition to not do any work failed yet again as I had more bits to deal with, but I also spent time doing some things on my list at home (including rolling all of our Ocado carrier bags, as they used to take them back but don’t at the moment, so we just bunch them up and shove them in the cupboard under the stairs- after 10 weeks it is getting hard to find space!), sorting out my new house plants and organising my desk a bit better. 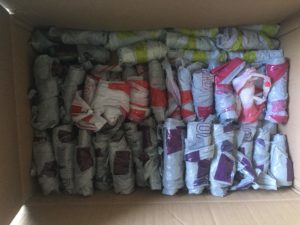 We used our Vitality code to hire a film for Friday night- The Day Shall Come- (about the FBI using undercover agents to try to entrap people into terrorist activities) which was very good but also just bit depressing. 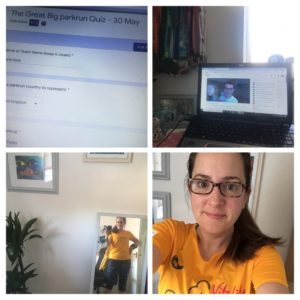 Saturday was the standard 5 miles before the parkrun quiz (and you can see one of my new plants)- 9/15 this week, so better than last week but no pb!  Once that was finished I made us pancakes for breakfast, with berries and maple butter. 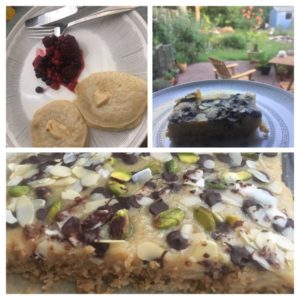 Then I made the Pret Love Bar (they have been publishing some of their recipes on Insta) – it is basically a flapjack topped with caramel, chocolate drops, nuts and seeds. I didn’t have any pumpkin seeds so I used some coconut instead.

We had to prep some quiz questions for later on (Andy borrowed a very funny idea from Joe Lycett) where you blur out a picture of a castle and have to guess which one it is (we included Cinderella’s castle). Andy’s car had not been working (the battery had gone flat) so after getting a charger he wanted to test it out, so we popped over to see his brother as he had  cleared out  their garage and found some bits they’d borrowed from us ages ago- it meant I could give them some of the flapjack too as it made rather a lot!

We managed a quick walk before dinner and were just ready in time for the quiz, which was good fun as always. Then we watched the space rocket launch and went outside to see if we could spot it (but we couldn’t- we did see the ISS though). 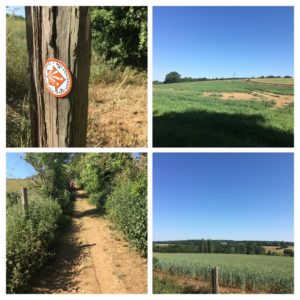 On Sunday I headed back to the new paths that I’ve been finding, and looked for more of the WCG 20/20 route. 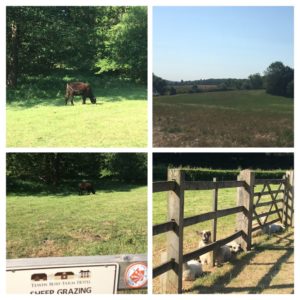 I took my time, stopped and looked at lambs, birds, and of course the signs! 6.5 miles and that was plenty as it was so warm. 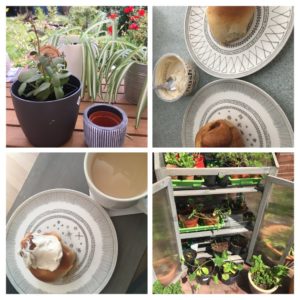 I’d made cinnamon rolls the night before and so they just needed baking and topping (using the rest of the cream cheese and a little maple syrup) for breakfast before heading out to the garden. While Andy did the tough jobs like moving the concrete slabs that he’s been digging out, I did jobs like planting out sunflowers, putting pumpkin plants into bigger pots, a bit of weeding, splitting my spider plants and potting on a little house plant. 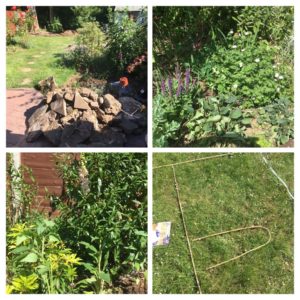 I had persuaded Andy to do No Mow May (to encourage flowers for the bees) and you could do a flower count- there are a lot more daisies in a metre than you would think!

Then it was time to pack my work bag yet again and wonder where the last week had gone.

Have you ever made bagels? Is there something on your list that you would like to try but have not got around to yet? Have you made any changes since the lock down guidelines changed? (I know they have since been even further relaxed in England but I am still sticking to essential travel and exercise)

2 thoughts on “Running, baking, gardening and the rest of half term”