On Saturday morning I drove over to my parents and my dad, my brother and I went on a 5k route. Dad had mapped out a new route for us, starting in the same way but coming back a different way. It rained on and off, but only for a few minutes at a time, and it was a nice temperature. 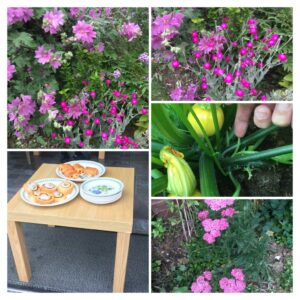 Look at my pumpkins! They were only raisin-sized last week!

Once back at theirs it rained a bit more- my mum and dad sheltered inside and opened the back doors, and my brother and I stood outside in our coats! They put a table by the back door with some croissants on, and I had brought my tea and water with me so I was all sorted. Dad kept saying he  felt guilty for us being outside, but I reminded him I was an early years teacher so very well prepared for being outside in all weathers!

As we were heading back there on Sunday, I didn’t stay too long, and once home got on with a few hours of work, before pottering around in the garden later on. My plan had been to paint more of the fence panels, but it kept raining for maybe 5 minutes every hour, so it just would not be dry. Maybe next week!

We watched From Up on Poppy Hill, a Ghibli film, on Saturday night, as a break from all the documentaries.

Then on Sunday I was off exploring the next section of the WCG 20/20 route.   For anyone local, the map is here. I’ve been going anti-clockwise from home, out and back, and have made it close to the town centre (Sherrardspark Woods), so this week decided to go in the other direction. The route went through a local nature reserve- I’ve seen signs to it from the main road, but it always looked like a very small field so I hadn’t bothered going there. It was actually a good mile or so of footpaths through woods, past fields (with long horned cattle), with little bridges over streams. 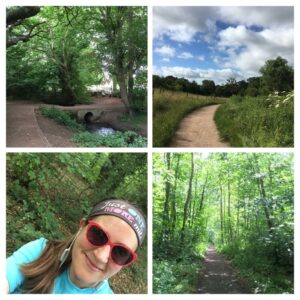 It was wonderful and I cannot believe that I haven’t been there before. The route then goes through a golf course which was a bit scary because it had loads of signs saying that it was private properly, keep to the footpath, look left or right for golfers and so on, but the signs weren’t that easy to see. The footpath wasn’t obvious because there were loads of paths criss-crossing the golf-way. Anyway, I found my way out! It then took me along the farm track that I’ve not run along since I was chased by dogs (thankfully no dogs today) and then into Stanborough Lakes. The route at the far end directed me down some steps and under a bridge, but the path under the bridge was totally flooded, and I’d run over 5 miles at this point so decided to re-trace my steps. I was going to go further and then head home the more direct way through town, but this way was fine. 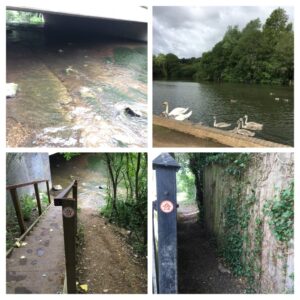 There were wet footprints on the steps so someone had braved it, but it was ankle deep at the part closest to me so I didn’t fancy it. 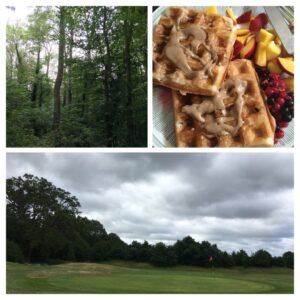 Once home I had a shower and waffles (with peanut butter, maple syrup and fruit), and then we headed over to visit our parents- first Andy’s and then mine. It was my dad’s birthday in the week so we gave him his card and presents and my mum had made caramel shortbread- good choice! We were so lucky with the weather-  we were in my parents garden and had to leave (as Andy wanted to be back for the football) and as we were walking through the garage it started bucketing down!

There went my plan for painting the fence while Andy watched the football anyway! I had a bit of work to get on with so I did that, and then we had a walk later on once it was dry.

How well do you know your local area?

2 thoughts on “Another not parkrun and exploring more paths”