I know that it was forecast, but I didn’t expect it to be as hot as it was last week!

I’m working on the September Red Cross challenge, and am aiming for over 100 miles in September. This was going to be 10 miles on a Sunday, and then 5 miles on Tuesdays, Thursdays and Saturdays, but on Tuesday it was so hot I did 4 and that was enough. I was OK out running but as soon as I stopped I felt so hot, and ended up with a really bad headache all evening and all night. I had looked at running before work, but as the street lights aren’t on until 6am and I have to be home by then, I am not keen on it now that it’s darker. I was regretting that at the time though.  Yoga on Wednesday evening was very much needed to recover from that night of poor sleep. 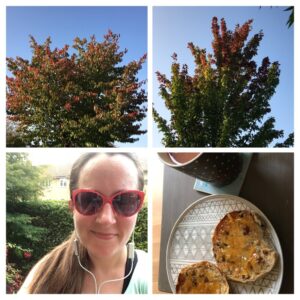 Thursday’s run was more enjoyable, seeing some beautiful autumn trees and being a more acceptable temperature.

On Friday I had to race home because I had booked my flu jab- I am getting it done early this year after there was such a problem with them last year (I had booked, when I turned up they had no jabs, they said to come back another day, I did, they still had none, ended up being sent to a different pharmacy…). It is lucky that Boots send out a reminder text message because I thought I had booked one pharmacy but in fact had booked another! Anyway, it was OK. I hate needles and have often fainted when I get an injection, although the flu jab last year was fine at the time, just made my arm ache for ages after. The hot cross bun was required for recovery! 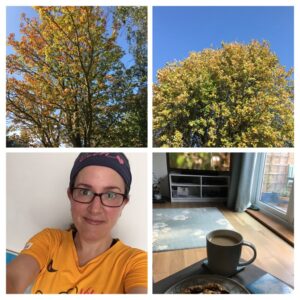 On Saturday I did a not parkrun at home- I was meant to be seeing my parents but I felt I could not risk it because we have had children with symptoms at work but the delays to testing etc means we don’t know the result of the test for a while, so potentially I could have been exposed to it. Although I only sit in the garden I just don’t want to risk anything like that. I had breakfast with Andy when I got home from my run- we found some almond croissants in the freezer so heated those up with a few chocolate buttons added inside. 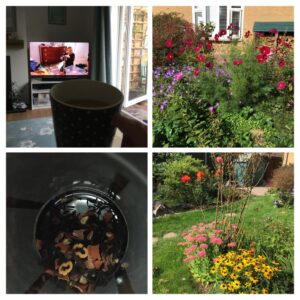 The rest of the day was filled with exciting things like housework, school-work and a teeny bit of gardening. Plus pumpkin spice tea- look at the cute little pumpkin sprinkles in the tea. 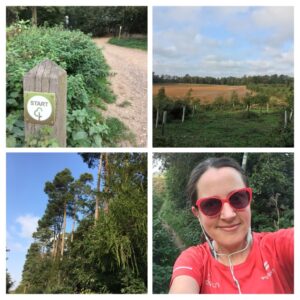 On Sunday I headed over to Panshanger for my long run- I decided to do 11 miles this week and so ran there (3 miles), did the parkrun route plus a little out and back (4 miles) and then back home. 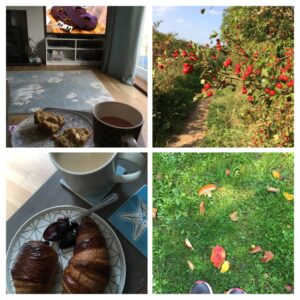 Croissants for breakfast again, and then some pottering at home while watching the parkrun Q&A (recorded on Friday).  I made myself some medals because next weekend was meant to be the Disneyland Paris run weekend- Andy has Friday off work as he was going to travel in the day to collect our bibs, and I was going to go there after work, then we were going to do the 10k on the Saturday (if you arrive late Friday night you miss the expo so can’t collect the 10k bib) and I was going to do the half on the Sunday.  So I am going to run the distances next weekend and then have some Disney- themed fun at home (just like in May- I can’t believe it was 4 months ago that I was doing the May run weekend virtual run…).

How did you cope in the heat this week? Do you worry about injections?