So last week I mentioned that I decided to re-do my Christmas cakes. I was trying out a new recipe (a vegan one) and also dividing the mixture into smaller tins, and I think I just overcooked the first lot. A bit of a pain, but I have nowhere else to go at the weekends right now! 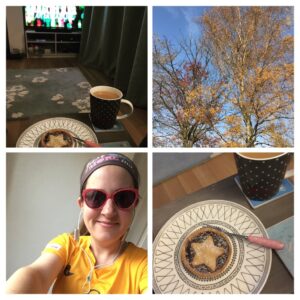 It was so sunny the other weekend that I wore sunglasses on my (not)parkrun- it made a nice change from after work runs in the dark. I thought our Vitality reward would stop in the lockdown (last time they stopped) but we are still being credited with a free drink each week, so on Saturday we walked into town to get a takeaway- I tried their mint hot chocolate and it was really good. We also bought a mince pie because they are so tasty (and happen to be vegan). 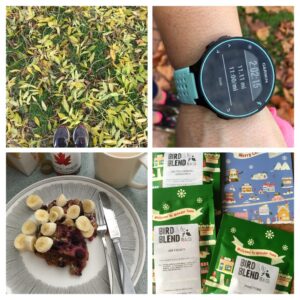 (This shows how behind the blog is)- on Sunday I wanted to run 11 miles as it was Remembrance Sunday- as I ran past home I realised I was just over, so kept going to make it 11.11. I had made baked French toast- before I have used the Pip and Nut recipe, but I am reducing animal products more  and more (it includes eggs- I used to get eggs from my mum because she keeps hens, but I am going off the idea more), anyway, this recipe uses a combination of coconut milk and silken tofu, and was so tasty. (I kept the slices whole and spread peanut butter on them and sprinkled with berries, so it was a bit of a mash up between the two recipes). 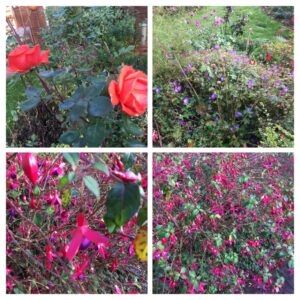 I wanted to do some bits in the garden, and am amazed that lots of the flowers are still going. Our rose has started flowering again, the fuchsias are still going strong, as are the geraniums. Good for the bees.  I am finding the temptation to work a lot more at the weekends, but I know I need a real break. Work is always busy, but with the added covid pressures I am feeling more drained at the end of the day, so I know I need a rest at the weekend, but as there isn’t a great deal to do it’s hard to stop. I used to like a walk into town and a sit in a café with a magazine, because at home I could sit and read but there would always be a job that needed doing. Anyway, now that isn’t an option either, so I am finding that giving myself something else to do is helpful. I like to watch a film or some TV, but only after I’ve been busy first- I feel all antsy if I sit around inside all day.

That weekend I made a little hedgehog home. I say home, really it’s some leaves and twigs (no woodwork involved). 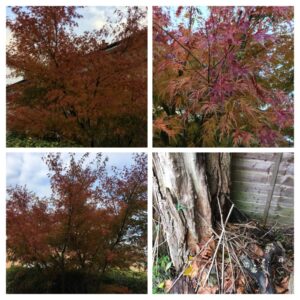 I’d seen it on a newsletter, and thought I’d give it a go. Apparently hedgehogs are really struggling, partly because we are all putting up fences so they can’t wander from garden to garden, and also because we tend to keep our gardens tidier so there isn’t piles of leaves for them to hibernate in/ logs for the bugs to live in that they feed on and so on. This home was simple- pile up leaves (I started with small ones first) and then top with twigs so they won’t blow away. I tucked it at the back behind a tree stump, and am hoping that it is useful, if not for a hedgehog at least for bugs. 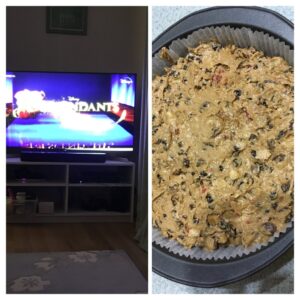 On Sunday afternoon I had another go at the Christmas cake- this time it turned out really well (I made one big one instead of two smaller ones)- it smells delicious. It was this recipe– looking forward to decorating and gifting later. While it was baking I watched a movie- this time I gave The Descendants a go. Someone had recommended it to me, although I had got confused and thought it was the film set in Hawaii about the family on Kauai. Anyway, it was quite fun although I kept getting confused by who the characters were related to! 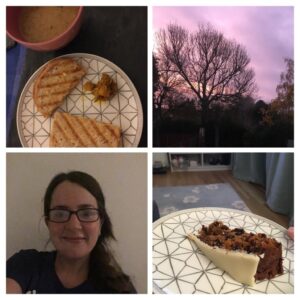 In the evening I sampled the Christmas cake (of course I had to put a bit of marzipan on it, because that’s the best bit) and it passed with flying colours.

On a side note, I love a grilled cheese sandwich, and used to have a sandwich maker but it broke (this was probably 15 years ago!). I saw this sandwich maker getting lots of positive reviews (randomly on a teaching forum) and decided to treat myself. Well, I have no idea how it works, but it’s amazing! I use the violife cheddar which melts really well, and added a bit of piccalilli in- alongside some veg soup it was such a good dinner.

Do you have any traditions? For a long time now I’ve always baked a Christmas cake for us, my parents and Andy’s parents, and it’s one of my favourite projects as I get to decorate the cakes too.

What sort of things are you doing to relax at the weekend? I’ve been eyeing up some craft projects for the next few weekends.

If you have a garden, do you think it helps to support local wildlife?