I have always been quite happy to run on my own. I love that running gives me “me” time, and that I can clear my head, process things for work, or catch up on podcasts. But then when I joined my running club I really looked forward to the club run each week as it was a chance to catch up and chat- the miles do fly by. Due to logistics, I haven’t been regularly attending the club runs for a few years, but every now and then I have, and of course at parkrun there was always the opportunity to run with others.

I had been running with Dad on a Saturday morning before the latest lockdown, but that stopped as I had been popping in to see my mum too (and sitting in the garden for breakfast). As the guidelines stated that we were allowed to meet outside with one other person for exercise, our running club facebook page has been getting a lot of requests from people for a running buddy, and as luck would have it, one friend wanted to run after work on a Thursday. 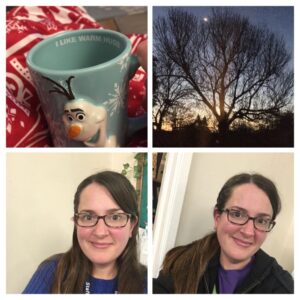 I messaged to say I would meet her around 5, as I could drive past her house on my way home. I was looking forward to it all day. I changed at work (above- pink cheeks as I had to make several parent phone calls after the kids had gone home- and then after I had changed into my running kit in my cupboard) and then parked outside her house.

It was fab! We did an out and back route, different to my normal route as she lives in Hatfield, and it was so good to chat and just talk to someone different. I don’t think I realised how much I’d missed it until we started running. 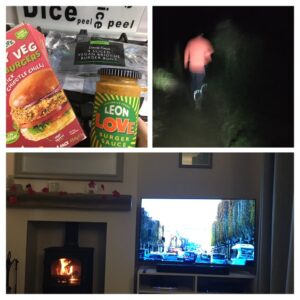 The Leon burger sauce is still going strong- with veggie burgers and vegan brioche rolls from Aldi it is as close as we can get to Leon right now!

The following week I did the same thing- on Tuesday I met Carrie on my way home (although my meeting went on a little longer and then I got stuck in bad traffic so was rather late) and on Thursday I stopped and met my dad. We did our traditional route through Jersey Farm park- luckily we both had lights, and it was so good to be running through theses deserted woods and paths.

I think because at the moment everything is more lonely than usual it’s just even nicer to speak to someone in real life, so I am really appreciating runs with company. It does mean I am getting behind with my podcasts though!

Do you like to run on your own?  How are you coping in the lockdown?