So, last week it was the start of December. Usually we can say things like “wow, how is it December already?” but this year it feels like we have been in December-Eve for ages. 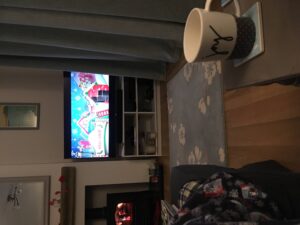 On Sunday I watched another festive film, this time Noelle, from Disney+. This was more of a fun Christmas film than Last Christmas (which was a bit more like A Christmas Carol)- loads of lines from Christmas songs, lots of cute decorations and full of festive cheer. I did wish that Anna Kendrick would sing a bit more though. 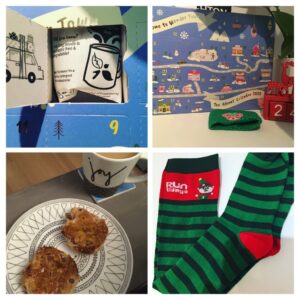 Advent calendar excitement, Run up 2 Christmas socks and a hot cross bun with some tea after a super busy day at work

As well as advent calendars, December marked the start of our running club challenge (they’ve created 12 days of Christmas, with 12 challenges to be completed, in any order during December), and I am also doing the Run Up 2 Christmas for MIND- I am aiming for 100km before Christmas day. 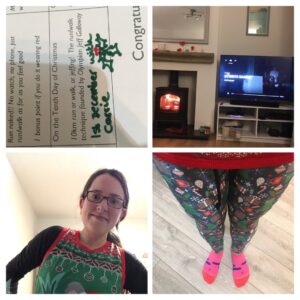 On Tuesday after work I met Carrie for a run. We had said we would run to see the Christmas lights in WGC (I was even wearing my Christmas top which I realised that after putting on my high viz vest and light over the top, no-one could actually see…), and after doing a little detour around the town to see some of the lights, we thought we would be able to tick off the 10k on the club challenge- we actually ran over 7 miles which we both agreed was something that neither of us would have done if we were running on our own. I was absolutely freezing though- after work I’d had a meeting and to make it socially distanced we had to sit in the hall, with all the  doors open, so it was about 4 degrees. I think only after running around 4 miles did I start to feel warm, and I was so  glad when I got home to find that Andy had put the wood burner on.

On Monday we finished The Crown, so Tuesday was the time to begin The Queen’s Gambit (a week on we have finished it!).

On Thursday I drove to my parents and had a run with Dad- he had planned the route and it ended up being very muddy as we ran across fields and along bridleways. It was good fun, and although it had rained all day, it actually stopped when we started running, and with the moon out was quite a clear evening. I wore my new Pro Viz jacket which I had got in the sales. I mainly got it as a waterproof as despite washing my running jacket with the special wash stuff, it isn’t any good in heavy rain. Weirdly, despite being the same price and pretty much the same design, the cycling jacket is waterproof and the running one isn’t, so I got the cycling jacket. I am so impressed with the reflectivity, as was my dad. 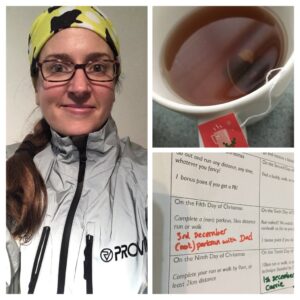 See below for how muddy my shoes were after! Another club challenge ticked off (a (not)parkrun). 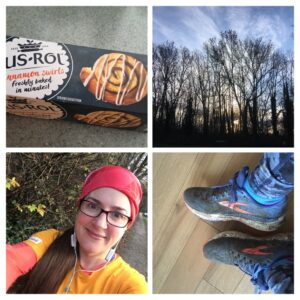 On Friday night I slept so badly, and on Saturday decided to do another challenge, 3 hill repeats somewhere in your run. I ended up doing 5 miles, but just never warmed up and my pace was super slow the whole time. After a hot shower and breakfast, I still wasn’t feeling great but just thought  it was because I hadn’t slept well. I managed some cleaning and a walk to get some fresh air, but I had some work to do and ended up sitting in bed attempting to do it, and just went to sleep all afternoon instead. Andy woke me up and I had some dinner, and then went back to bed again.

No run on Sunday morning- instead a morning spent watching TV. By the afternoon I felt a bit better, and Andy had found a local Christmas tree farm, so we went there to choose a tree- it’s a hard decision! 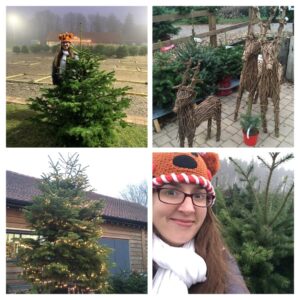 Although by the time we had got it home and put it up, I had no energy to get the decorations down or start putting them up, so we left that for another day.

Are your decorations up? Real tree or fake? We have a fake one which we put up each year, but as we’re not going away as a special treat we got a real one this year.

2 thoughts on “A festive run and tea advent!”