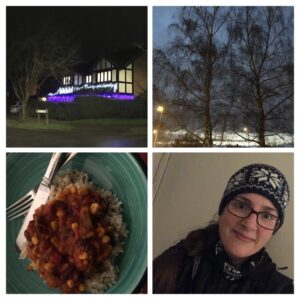 Christmas lights, early running, veggie chilli to warm up after being at work with the doors open all day when it was 3 degrees at best…

Well, I’ve enjoyed seeing the Christmas lights left up while I’ve been going on runs. We took ours down before I went back to work, but I only took my wreath off the front door this weekend. 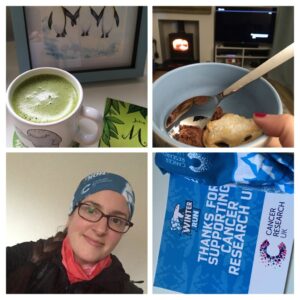 I’d forgotten that I had signed up to the virtual winter run- I did it a few years back, and they had emailed out a while ago- raising money for CRUK of course which is a brilliant charity. I didn’t really pay attention but I’ve been sent a buff which is really nice, and has come in handy when I am wearing two for each run (neck and head) when it’s been so cold. 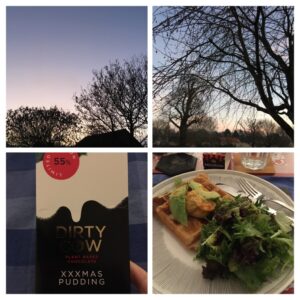 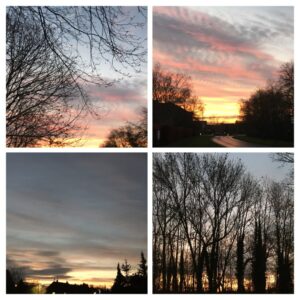 One sunrise run that took longer as I kept stopping to take photos!

I’ve been lucky that I can work from home at the moment (moving forwards this depends on staff sickness levels and critical worker childcare places) so I’ve sorted out a routine that works well- a run first thing, working remotely with a break for matcha or tea in the morning, lunch with Andy and then powering through the afternoon. Yoga was back in the second week, and it was just so good. One reason why running suits me is because I am not very good at working out at home- if I am doing a video workout I will get distracted by things that need doing (I’ll just put that box into the recycling, then I’ll carry on…) but with a run I am outside and away from those distractions. The live yoga classes online have been great, but I have not worked out a way to continue this on other days of the week (yet…). 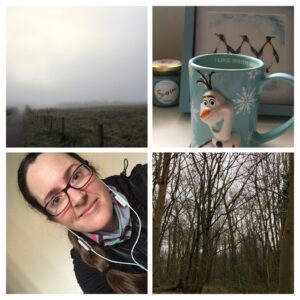 A misty run last Saturday, tea in my Olaf mug, my new OH buff for the 12 days of Christmas challenge and a run in the woods.

I am not used to staring at a computer screen all day, and it seems to build up so by the end of the week my eyes have been really struggling.  I am having breaks (my favourite is when I get to draw something that I’ll then photograph and add to the virtual classroom) but it’s been pretty intense. So I have now set an alarm for the end of the working day, and this is when I will do some yoga. I did this on Thursday and Friday of the week just gone, and even though I only did short videos (15- 20 mins) I felt so much better.  A chance to move my stiff shoulders and rest my eyes (for the most part, because I still have to glance at the screen to see the poses).  I felt a lot better after each session, although the first one I did spend too much time actually finding a video to do, but once I’ve got a few playlists to look at it will be easier. 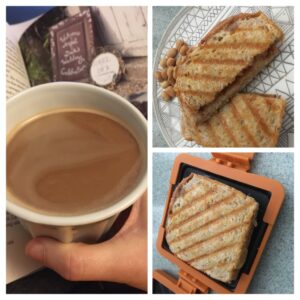 Working at home has meant slightly nicer lunches too- I made myself a toastie the other day and it was sooooooooo good (violife cheese and pear chutney). 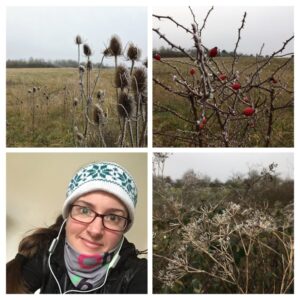 Last Sunday I had a really good run- it was super cold and frosty, and amazingly the plants had frost on only one side- totally white on one and dark brown on the other. It really looked as if they had been spray painted! I do like a run in the cold, but I do not like how sore my skin gets after- even if I warm up for a bit before getting in the shower, my skin will go bright red and be itchy for ages after. 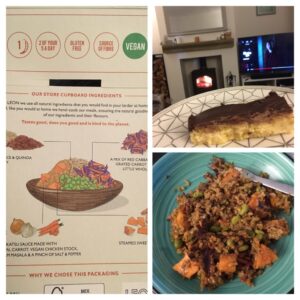 I’ve signed up to do Veganuary (more on that in another  post) but it’s been good, and nice to have something else to focus on other than the endless cycle of bad news. We treated ourselves to some sort of takeaway ready meals- Leon Katsu (as I do like the Wagamama vegan katsu)- it was pretty tasty. Mum made us some vegan caramel shortbread too- we had ordered them some shopping online as there are a few things they can’t get from where they get their shopping from, so we drove the shopping over and received the shortbread in exchange. It was really good (even if Mum did tell me that if it was no good I could feed it to the birds- there’s confidence for you!). 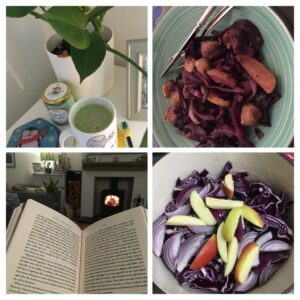 Matcha, roasted red cabbage and reading my Chateau book by the fire to combat too much screen time

There is a fab website called A Virtual Vegan, and there are loads of good recipes on there- this was a red cabbage recipe which we added veggie sausages to.  I’ve been bookmarking a lot of recipes and have trialled a few,  but will go into it a bit more another time.

So, it’s going OK. I do wish I was allowed more than one outdoor exercise slot a day, as especially at the weekends I would like to have a run in the morning and then go for a walk with Andy in the afternoon. But I do know that we have to follow the rules, so I have to move things around and run more in the week so we can enjoy a long walk together at the weekend when we have time in the daylight.

How is lockdown 3 treating you? If you work from home normally, what sort of routine do you have? And if you usually work at a computer all day, how do you cope?  I am sure we had some training once and it was something like 20/20/20, which was every 20 minutes, look at something 20 m away for 20 seconds. Or something?