A few years ago I did the London Winter run with some friends from my running club. It was totally freezing, but a good enjoyable run through the centre of London. Before Christmas I’d been sent an email about signing up to the virtual event, and then of course forgot about it.

Luckily they sent some emails out, and the plan was for everyone to run a 10k on Sunday 7th February. You were also encouraged to fundraise for Cancer Research UK, which I was very happy to do (link here if you fancy donating) – all these charities are losing out at the moment due to no actual events going on. 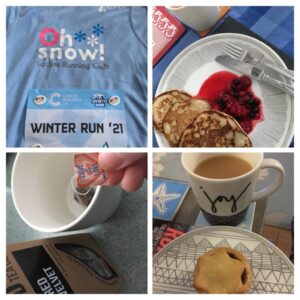 Bib on my vest, pancakes, tea and mince pie from the weekend too

I decided to use the Festive 5 route (which is two laps close to the town centre) and add on a bit more, as that would make it feel like a race. I even pinned my number onto my top the night before- It’s approaching a year since I did an actual race so it was quite nice to have this little ritual once again. I did forget to paint my nails though (never mind, I had gloves on anyway).

On my way there (around 2 miles for a nice warm up) this fox crossed the path in front of my and stood looking at me for ages. 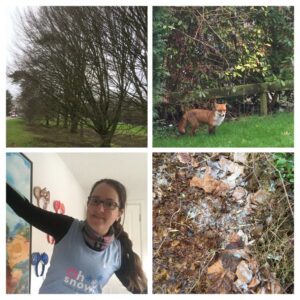 It was sleeting the entire time, sometimes quite hard and other times more gently. When I got to the “start”, I took my jacket off and put on some music (I was going to have a different playlist, but it turned out that my Run Disney playlist was the only one actually downloaded on my phone)- I thought music would be better than a podcast to make me feel more like I was in a race.

I had some very apt songs (mainly from Frozen and Frozen 2) and the opposite (“What time is it? Summer time” from HSM being the most opposite to where I was!), but the music helped to keep me going in the horrible weather. As I neared the end I noticed I was on course to come in under an hour, so I put on a bit of a spurt and just managed it, with a 10k time of 59:52. I’ll take that! I have not run fast for ages- to put it in context, half of this was also a (not)parkrun pb for me!

I messaged Andy to say I was heading back, put my jacket back on and then ran back in the sleet. As I arrived home, Andy was making us a hot chocolate each in the velvetiser- this was the perfect post- race drink to warm me up. 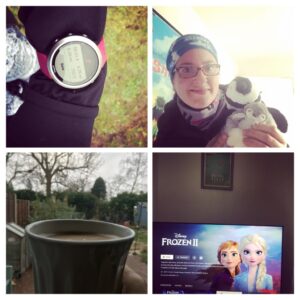 I even got to “meet” a penguin!

I couldn’t pose with a medal because they aren’t being sent out until after the race, which I think is a little shame. After a shower and breakfast I was still pretty chilly, so sat on the sofa under a blanket and watched Frozen 2. It went perfectly with the weather and the overall theme of the day.

I really enjoyed the event. The fact that it was happening on the same day gave it a more cohesive feel, and although the weather was freezing, it was good to feel that I was raising money while getting out there. I didn’t take part in the virtual London marathon, but I did enjoy being out running that day and seeing people wearing their numbers, and so it felt a bit like that.

Have you taken part in any virtual event?