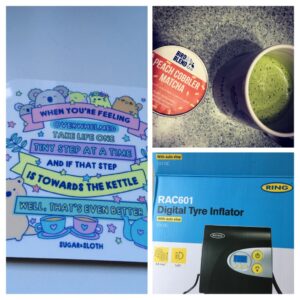 Cutest coaster and perfect for this time, matcha for Monday morning, and my new present

Andy bought me a present of a digital tyre inflator! I really panic when I have to put air in my tyres – I hate the time counting down, and don’t always have the right coins, and one time I managed to deflate one tyre as I hadn’t fastened it properly. Anyway,  this one plugs into the car power so you can do it at home, in your own time. Only I didn’t quite do it properly- I checked them all on Sunday, and then on Monday morning the light was flashing. Argh! I had to do them all again, and took it with me to work in case it was wrong again. Luckily the  light didn’t come on but that was a stressful start to the week! 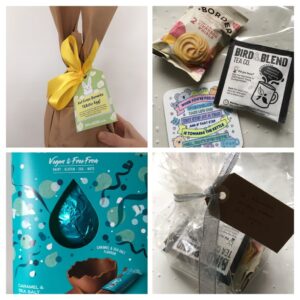 Last month, Sugar and Sloth was the artist who designed the Bird&Blend tea club postcard, and I totally loved it and so have been ordering a few bits from them. I got myself that coaster because it seemed such a good reminder to take things one step at a time, and then I ordered some other designs to make little Easter gifts for people at work. You can buy singles of teabags from B&B (you always get a few samples with your order, but you can actually buy them now which I really like), so I ordered a box of chocolate digestives tea (it’s black tea with cocoa nibs and other delicious things), and also some little packs of biscuits. I got some biodegradable wrapping, and wrapped them up into a little parcel. I was quite pleased with how they looked. (I also got myself a vegan Easter egg from B&B as it is dark chocolate infused with their hot cross bun tea which just sounded so amazing, plus it is wrapped to look like a bunny, complete  with pom-pom for a tail). I have since become a little addicted to Sugar and Sloth- they do little monthly themed  boxes so I could not resist ordering a penguin one!

This week followed the same pattern as the previous week- runs on Tues, Wed and Thurs before work, yoga on Wednesday night, and a run with Dad after work on Friday. 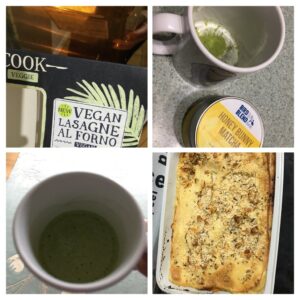 Matcha in the mornings is helping me keep going through the term- I’m enjoying rotating a few different flavours, and mainly making them with hot water (80 degrees) then frothing and topping with a little oat milk. If I have a run, I’ll have one as soon as I am home, then have a shower and have breakfast after that.

We treated ourselves to a ready made dinner – the Cook vegan lasagne is really tasty with pine nuts in the topping. 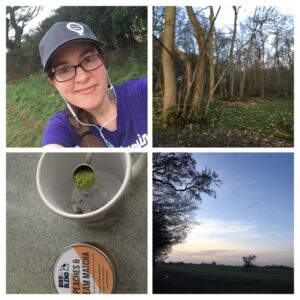 I was fairly lucky with the weather again- a few days we had rain, but I was out and home before it got heavy. I don’t mind getting wet, but I don’t have time to wash my hair before work so it’s better if my hair stays dry! It’s so light in the mornings now. I am heading out at around 6am and it’s pretty much daylight. I feel so lucky to have these fields and woods so close to where I live. 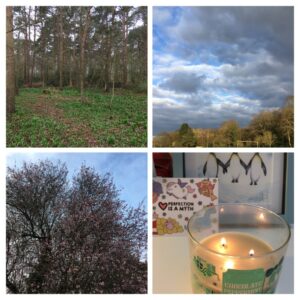 I’ve been having a candle on during yoga which I feel helps to set the tone. Often in our classes we would have a candle, or the garden would have fairy lights, and sometimes the teacher would use a scented spray for the room (essential oils) and I think I miss those little added bits.

On Friday we had our back fence put in, so my weekend job was to paint it. I love painting, and painting outside is even more stress-free because it doesn’t really matter if you spill it (I did put some cardboard on the patio, but if some drips onto the soil then it’s fine).  It is crazy to see the change of colour when it dries through! The wet paint looks so chalky. Now we have this lovely big bed at the back, ready for some trees and shrubs, we’ll put some bird boxes up- a world of possibilities. 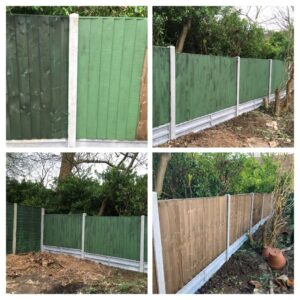 Our Saturday was standard- pancakes for breakfast, a walk, a click and collect hot drink for the walk home, cleaning and then fun garden jobs. I did squeeze in some baking (peanut butter slices). 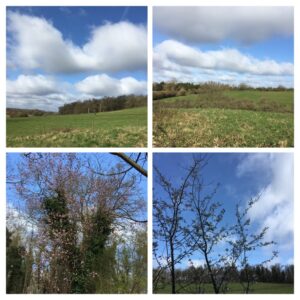 On Sunday I headed out on a different route to Panshanger. At one point I was running down the old railway line, and came across some horses coming towards me, so I stopped and let them past. Then, as I ran further along, there were 2 heading the same way as me. They were walking, so I asked if I was OK to run past, and the  riders waved me on. But then, a few moments later, I began to hear the horses running, and I could hear them getting closer, so I jumped sideways into the bushes to let them past. They thanked me, but then a little further ahead, they stopped and walked again. I realised that they were walking each time someone was coming the other way, but this meant I kept catching up with them. I ended up walking a fair bit to keep them ahead of me as I felt so nervous heading them coming up behind me. (They were very friendly and it is no reflection on them, it just made me feel panicked). 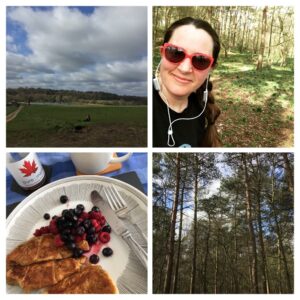 When I got home, I had French toast with croissants. I’d seen lots of recipes on the internet, so sort of combined them- basically making a little mixture of almond milk, chickpea flour, cinnamon and vanilla, dipping the (vegan) croissants in it, and then cooking them in a pan for a few minutes. Served with fruit and maple syrup it was a pretty good brunch and one I’ll repeat for sure.

We watched the new Line of Duty on Sunday, but I felt so blah about it. I quite like the series as a whole, but I do feel that it has got worse as the series have gone on. I mean, it’s fine, but it’s not the best TV ever (eg The Wire or something like that). Anyway, the “chis” was driving me mad (took a bit of time to work out what they meant from the context and you know you don’t have a good enough script when the continuity announcer at the end had to explain what it was. And even then, I cannot remember. Why can’t they just call it a CI like every other police drama????).  We decided to give it another go next week, but I really feel not that enthusiastic about it.

What do you think of the latest Line Of Duty series? What is your favourite Easter egg?