Yup, snow was falling the whole of my drive into work on Monday morning! Not what you expect at the start of the “summer” term. (Also, why is there no winter term? We have autumn from September to December, spring from January to Easter, and then summer…) 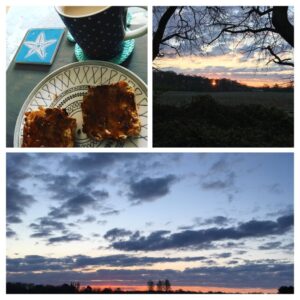 Back to work meant back to early runs, and some pretty sunrises. I’ve got a loop that I quite like at the moment. It’s 4 miles and mainly across fields and a little bit through some woods- nice and quiet and a good way to set myself up mentally for the busy day ahead. I did the same route on Tuesday and Wednesday, and then a slightly shorter out and back on Thursday as I was slow to get going and a bit achy after yoga on Wednesday evening.

We were baking hot cross buns with the kids at work so I really fancied one when I got home most days! 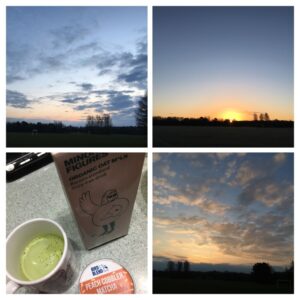 Once I get back from my early morning run, I’ve got a routine sorted to get ready for work too- a cold drink (water or coconut water), then I make a matcha, cook my porridge and make a tea to take into work, plus a herbal tea to have with my porridge. I then have a shower, and the porridge and tea have cooled enough for me to have them once I’m out.

The yoga class I do isn’t run in the holidays, so this week was the first one back after a 2 week break. It was going to be a gentle awakening, but ended up being pretty strength based at times. During our headstand practise I had one leg up and then briefly managed to push the other leg up before coming out of it. I am not sure if it’s a strength or confidence issue (or both) but I was quite pleased to have managed that, as the only time I’ve got close before has been in an actual class with someone holding my hips to keep me steady.

Work and social media has been full of people flocking to pubs and hairdressers this week. I’m not a pub fan, but I do really need my haircut. I just feel way too nervous about it at the moment. I have one hairdresser that I love (every other hairdresser has given me layers, even though it makes my hair even thicker and I always said I didn’t want layers…)- she totally understands my hair and is fantastic. However, the salon is upstairs in a shopping centre. It has no windows (only windows to the shopping centre), no fresh air, and also there’s now a nail bar in there so it smells chemically anyway. Just the thought of being sat there for over an hour, with the hairdryers blowing the air all around, just doesn’t seem great to me. I think once I have even one dose of the vaccine I might feel a little better about it, but right now I am still being cautious. Hearing our PM tell us that the unlocking is going to cost many lives shows that it just isn’t worth taking the risk at the moment. I could always cut it myself? 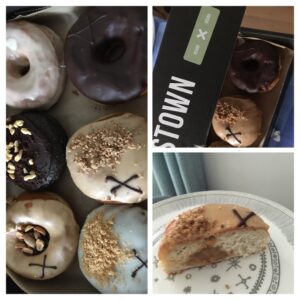 As a first week back treat, we ordered some Crosstown doughnuts. We were originally going to get them for Andy’s birthday,  but as I made him a cake it seemed silly to order them then. They did not disappoint- the chai filled one was a particular highlight. As the box contained 6 different ones we split each one, (half with tea in the afternoon, and then half after dinner) over the weekend. 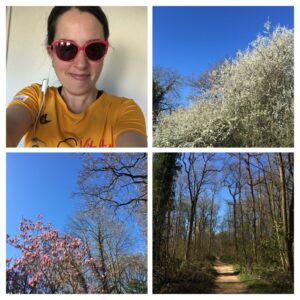 On Saturday I headed out for a run before we had pancakes for breakfast. I had some work to get on with, and then in the afternoon we walked around Panshanger park. The bluebells are popping out more and more. 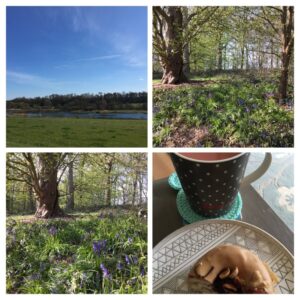 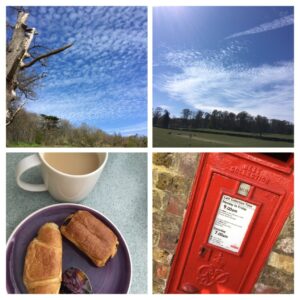 On Sunday it was my mum’s birthday, so after breakfast we met my family for a treasure hunt. We’d completed it several years ago, but it was quite fun hunting for clues. We did get a bit stuck because some of the signs were hidden behind scaffolding, and some of them (we think) had been changed (eg there were clues referring to zones which we think were parking zone signs and they have been updated). Thankfully the weather was sunny as it would not have been so much fun doing it in the rain. They went to meet my sister for a pub lunch after (the rule of 6 meant that we could not go along, although I wasn’t particularly keen on the idea of eating out for lunch anyway)- later in the year we’re going to do something together too as she really wanted to go for afternoon tea somewhere. 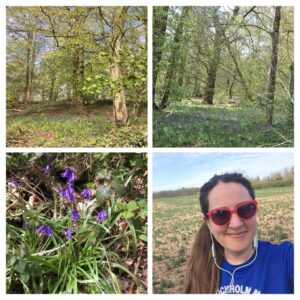 Once home I headed off on a run. I could have got up early and run first thing, but I didn’t want to feel rushed. As it happened, it was lucky that I didn’t go first thing, as I looked at a route that starts 2 miles from home. It’s a 4.5 mile loop, so I thought I’d run there, do the loop and run home, to make it 6.5 miles. But when I was half way around I realised that of course I needed to add the other 2 miles on for the run home too. Whoops! I would have been very late! More bluebell sightings too.

TV wise we’ve still been on a doc role. We watched the Framing Britney Spears documentary, which was really sad.  Just the way that photographers feel it is their right to be able to take photos of famous people wherever they are was really uncomfortable to watch. I saw a very sarcastic tweet about Harry and Megan, saying along the lines of “after moving to the USA to avoid publicity, they have now booked onto x number of shows”, but that seems to totally miss the point that if you book onto a TV show, you are choosing to be there. Having a camera shoved in your face at  all hours is just not the same at all, and some of the footage in that doc was just really frightening.

We’re also working our way through This Is a Robbery: The World’s Biggest Art Heist, about loads of art stolen from a museum in Boston. It’s pretty interesting but again just gets crazier as the series goes on.

To escape that briefly we watched the film Thunder Force, which was OK, but I think if you like comic book films or superheroes you might like it more.

Did you have snow or hail last week? Are you fussy about your hairdressers?