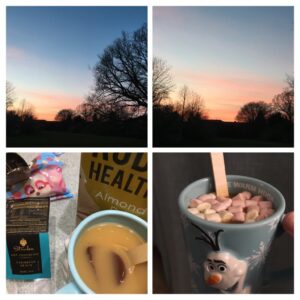 On Monday after work we went on a walk and had such a beautiful sunset. The clouds were so pink, and the colours changed all the time. I had seen lots of chocolate tea lattes being made on Instagram, so I had a go at making my own. After brewing the tea and adding milk, I used a hot chocolate stir stick, and then topped with marshmallows. It tasted so chocolately, more like a hot chocolate than a tea latte. Very tasty though.

Then, disaster struck when our washing machine broke! It blew the fuse, (thankfully on a cleaning cycle and not full of washing)- we managed to push the fuse down for long enough to make it drain the water out, but that was it. At the moment we have so much washing- if I go on a run and then to work I’m wearing 3 sets of clothes (as I change out of work clothes as soon as I get home) so the basket fills up so quickly! I had to wash some of my running bras in the sink as I only had a few left that were clean! 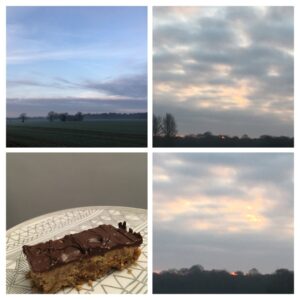 Delicious peanut butter slice from @sophie.bullimore (look her up on Instagram as she creates delicious and simple vegan bakes)

Runs again were pretty standard- 4 miles on Tues, Wed and Thurs morning. I didn’t meet Dad for a run as he was going cycling, and as it was the holidays coming up we would have plenty of time to run together then. On Tuesday morning the sunrise was really amazing- the sun had risen as I was heading down the road, and once I was in the park it was up, but there was a long strip of thick cloud, so I could see the bottom of the sun below the cloud, and then nothing. It looked as if it had been chopped in half horizontally. 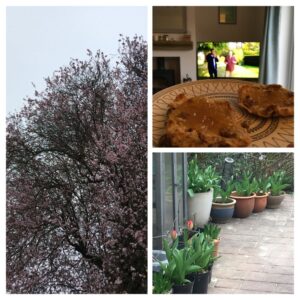 Our tulips are nearly out!

On Wednesday it was fairly overcast again. The big blossom tree by our front garden is looking really pink now, and the tulips in pots in our garden are about to open. I love seeing all of these signs of spring. Just hearing all the birds in the morning is a sign that lighter and warmer days are to come too.

It was our final yoga session of the term- I managed to just about stay awake in the final nidra part. A hot cross bun and Bake Off was also enjoyed. 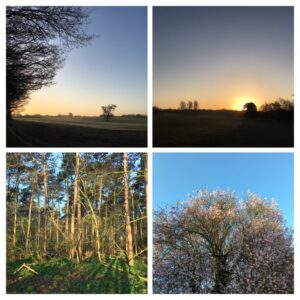 On Thursday again it was a beautiful sunrise. I have to remember not to take too many photos, otherwise I won’t be home with enough time to get ready for work, but it’s just so tempting. 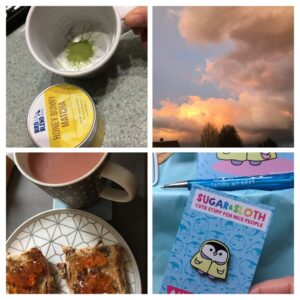 On the last day of term we had a walk as the sun was going down, and again saw some amazing clouds.  Some of my Sugar and Sloth goodies arrived- I just love all the positive messages. 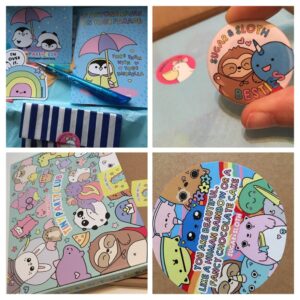 What signs of spring have you noticed? The woods near here are full of green shoots which will soon be bluebells, but the trees are still fairly bare.

3 thoughts on “Tea lattes, more signs of spring and sunrises”