A while ago we booked tickets for the Bristol comedy festival- it was all set up with covid in mind- it’s outdoors, you have to book seats in pairs or groups so you are only sat with people from your household and so on. Since then the same festival is coming to St Albans which would have been ideal (so much closer to home), but as we had the tickets and it was in half term we thought a few days away would be good to look forward to. So reaching the final week of half term felt quite nice as we have that to look forward to next week. 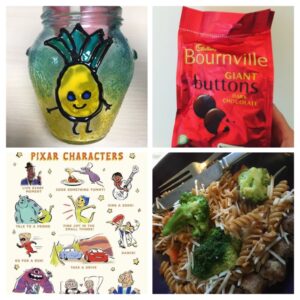 Pineapple candle jar, buttons, wellbeing Disney tips and a wellbeing dinner (eg eating on the sofa instead of in the dining room- pasta with broccoli and veggie sausages).

The final week went well- the children were only in for 3 days as we had training days on the Thursday and Friday. This makes a huge difference as they all get so tired and it’s a lot harder work. We have wellbeing buddies in school (recently set up) and mine gave me a pack of dark chocolate buttons to help me in the final week- so thoughtful. We also had a staff get together where we did some glass painting. At the moment we can’t really socialise as you can only have 4 people in the staffroom at once, and so people tend to be quite spread out around the school. Working as a team is one of the really good things about working in education, and we have missed that for these past 15 months. Anyway, the get together (or stay apart?) was really good- we could use the hall so everyone was spread out. I made a little pineapple on my jar, and I was pleased with the result. Mainly though it was nice to actually chat to people for a bit. 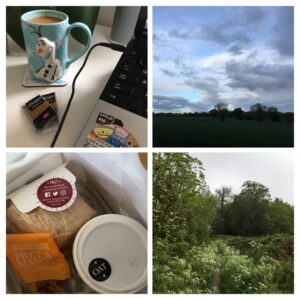 Also for wellbeing, I decided to order my lunch on one of the final days, from Pret (uber eats delivers). I had not had a lunch like that in ages, and it felt like such a treat.

On the Wednesday I had to rush off as I had an online training course to get to, and thankfully got home with enough time to make myself a cup of tea- training essentials of course! 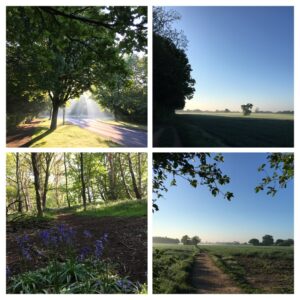 I had some enjoyable runs again- on the Tuesday it started raining about half way around, but the Wednesday and Thursday were dry (although I got wet from the long plants again). One morning there were amazing sunbeams coming through some of the trees. I do love the peacefulness of the early morning runs- I might pass one or two people walking their dogs but that’s all.

On the Thursday we had to be in school- the morning was standard training bits, and the afternoon was gymnastics training. Oh my goodness me I was tired when I got home- we had the mats, the ropes (I can’t climb them though), ladders and all sorts of equipment out, we were running, hopping, skipping about and making routines. Good fun but tiring! 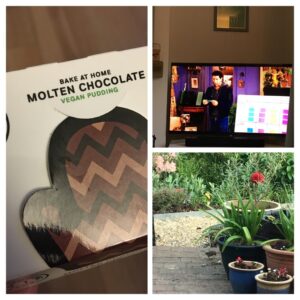 This robin keeps visiting our pots to collect nesting material

We watched the Friends reunion and had a Pudding Stop pudding to share- this one was a gooey chocolate pudding and was so good. They don’t look that big, but we made the mistake of having one each once and they are so rich it just isn’t good by the end. Sharing one is perfect. I really enjoyed watching the Friends thing too (although I didn’t feel they needed James Corden in it at all)- it was a bit like a flashback episode when they showed little classic clips. I know some of it hasn’t aged well, but on the whole it’s still so funny. 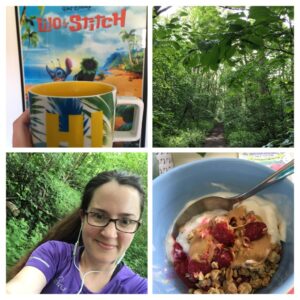 On the Friday we could work from home, so I took advantage of that and had a slightly longer run (5 miles) listening to With Me Now. It was so warm and I was regretting my longer leggings for most of it (not when I ran past a load of stinging nettles though).

I was super efficient with my work and managed to sort out all sorts of bits that had been on my list for a while so I felt very satisfied when I had finished for the day. No commute meant that I could also get on with cleaning (usually a Saturday job) so I could really set myself up for a relaxing weekend. 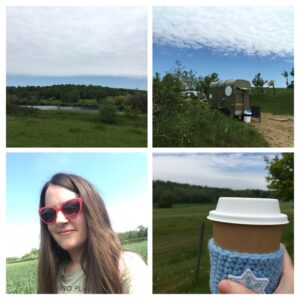 On Saturday we walked over to Panshanger and back. There has been a plant-based coffee trailer in the park but it’s too far from home to carry something back during a run (4 miles) so we treated ourselves to a drink each for the walk home, and a lemon muffin for later. We couldn’t hang about, as we had booked a test drive of an electric car. At the moment we have a car each, but Andy works from home so barely uses his car. Mine is small and perfect for commuting, but not good when we go away for a week (mine is an i10 like in the pic below- it just happened to park next to the car we had just test-driven) so we do need a slightly bigger one if we go down to one car. I was super nervous as I have only driven a handful of cars (literally- 1-the car I learnt in, 2-my first car, a Clio, 3-one of Andy’s cars- also a Clio and then 4, my i10). If we hire a car then Andy drives as I just get so nervous about it all, but as I would be driving each day then I really did need to give it a go. I’ve had my car for 6 years now (but my last car I had for 12 years…) and have always thought that my next car would be electric as that is the way things are going, but I did think I’d have this one for a few more years. Anyway, we’ve not decided anything, but I did manage to drive it and actually quite enjoyed it. 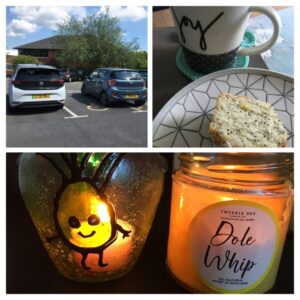 Test drive car park, half the lemon muffin and my pineapple candle holder being used

On our way back we popped in to see Andy’s parents and sat in their garden for a catch up. 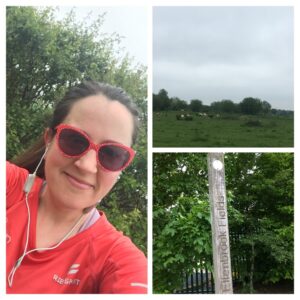 On Sunday I had arranged to meet my dad and brother at the end of my long run, in Ellenbrook Fields. It was the 50th weekend of (not)parkrun, so I wore my red top to commemorate (I can’t say celebrate, because it’s not good that it’s been that long).  I had an enjoyable run through the fields, did most of the parkrun route, and met them near the back of the fields, and we then ran back to St Albans together. It nearly totalled 11 miles, and had I been at home I would have run up and down the road to get it up to the round number, but I could not be bothered with it then! Again thankfully the weather was good and we sat in the garden and had breakfast. My  mum insisted on making me some porridge as well as giving me a couple of vegan croissants- there is no saying no to her! (Technically we are allowed inside now, and both my parents have had both their doses, but of course they are not a guarantee of 100% protection, and none of the kids I work with will be vaccinated so I could easily pass it on- I don’t think the LF tests that we have to take at work are worth the plastic they are wrapped in as if we do get a positive it has to be conformed via a PCR one anyway) 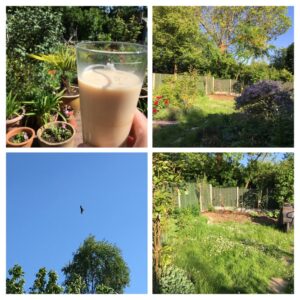 Lots of daisies on our lawn from taking part in No Mow May, plus the red kite soaring overhead. I love hearing them whistle to each other.

Once home it was time for more gardening jobs (staking the trees, potting on seedlings and planting out some courgette and tomato plants), but also time to actually sit outside and enjoy garden. I’d made an iced tea latte (basically we had some left over peach tea, so I left it to cool, then topped it with cold milk) and that was perfect to enjoy in the sunshine.

Then it was time for some packing ahead of our little trip away.

How many cars have you driven or owned?