And just like that, Midsummer was here! It was a miserable day- Josie (the yoga teacher) had suggested an online class as the sun rose to do some sun salutations in the garden, but it pretty much poured all day so that idea didn’t make it. I met Andy in town and we got a hot drink from Caffe Nero instead.

I was feeling OK after my fainting on the Saturday night, but I called the GP just to be sure, and they called me back on Tuesday to talk me through it. If it happens again they will investigate further but it could be a one off (here’s hoping). I felt a bit nervous about going out running, so stuck to laps on the streets close to home just in case I needed to walk back/cut it short. 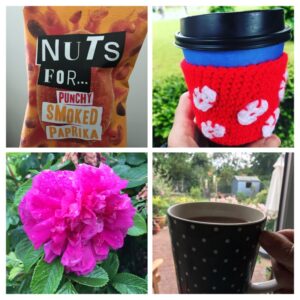 These roses grow by a roundabout and they smell incredible- they look beautiful when covered in raindrops too.

We were all set for watching England play the Czech Republic- nuts seemed to be our lucky snack as we had them for the first win against Croatia and then didn’t for the Scotland match (which we drew). It worked! 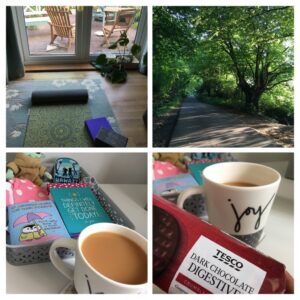 On Wednesday I had yet another webinar and it was a bit of a rush to get home for (they start fairly soon after the kids leave but go on until after our site manager locks up so you have to be home for them)- thankfully Andy made me some tea and even bought me up some biscuits- of course that always helps the online training go by better. Then as it was warm I set up for yoga in the living room again. It’s very enjoyable to have views of the garden as I work through the class. We had a belayed midsummer yoga session and it was definitely better than a rainy Monday morning session!

Thursday was a bit of a stressful day work-wise, but on Friday I had booked a massage at my favourite place in town for after work. I had not been for so long, and was a bit worried about what it would be like. There used to be a waiting room but now they ask you to wait outside and then you go straight to the treatment room. Masks on, hand sanitiser to use and so on, and sadly no diffuser in the room, but I felt comfortable (which is good as it’s meant to be relaxing).  Katie had even made her own oil using fresh mint leaves from her garden, so it smelled incredible. There was some awful popping and cracking going on, but I felt the difference straight away as I could properly look over my left shoulder again. 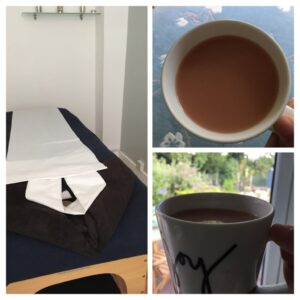 Afterwards I walked into town, picked up a couple of desserts from The Pudding Stop and got a cold drink from Pret. Almost a “normal” after work thing.

On Saturday I did a (not)parkrun and a bit in my new apricot top- it says “i love ellenbrook fields” (as there have been hints eg on WMN that it won’t be coming back- it still isn’t on the permission list so I am not holding out much hope). Once home I tried a bake at home Pret vegan croissant for breakfast (very tasty) plus a mango pot I’d picked up in town after my massage. We should have been in Brighton for the half marathon, so I thought I would replicate a weekend-away breakfast. 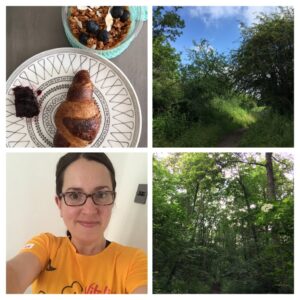 We went to see Andy’s parents in the afternoon and sat in their garden for a few hours- the rain held off until we were driving home.

A lot of my social media had been filled with people moaning about how come Wembley gets to be filled with fans but parents cannot watch sports day in person. I am trying very hard to not respond, because I hate getting into arguments in that way, but in the end I could not help myself. Yes, if you are a parent then it is disappointing that you don’t get to go to school and traipse around a field all morning watching children throw beanbags into hoops. But here’s the thing. The fans at Wembley were either double vaccinated or had taken negative tests. Schools do not have the authority to demand this or the capacity to track it. Plus none of the kids are vaccinated, so there is a much higher chance that someone would test positive at an event. But mainly, we all agreed as a society that education is important- schools went back for all pupils before many other leisure places reopened. One positive case at a school event could potentially shut the entire school for 10 days (and the school would not even provide for the vulnerable/key worker children because either all staff would be isolating, or the kids would be…). Schools need protecting because we want them to remain open. (I do appreciate that not everyone is aware of the requirements for the football fans but I am getting a bit fed up of all the negative press of people complaining about schools yet again when the staff are trying their hardest to keep up with guidance and rules etc.) 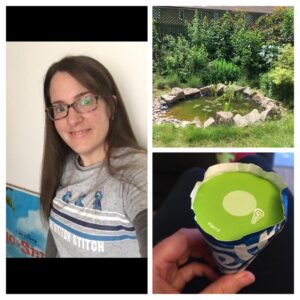 Anyway, normal service back. It was Stitch Day (he’s Experiment 626 and it was June 26th) so of course I had to wear some Stitch clothes. I did some pottering around in the garden and later in the evening enjoyed a vegan cornetto. 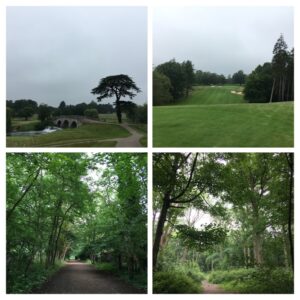 On Sunday I headed off for 10 miles on some of the centenary route- I’d forgotten how hilly it was in places and did a fair bit of walking too. Enjoyable though. I had pancakes when I got home, and then did some more fun jobs like painting the gate another coat. It’s nearly there now. Look at how many splatters I made though- the paint is very watery compared to the fence paint. 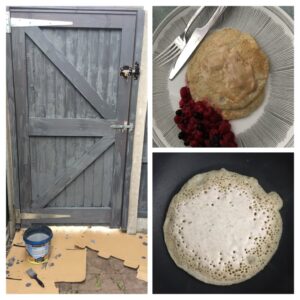 After pottering around some more, we enjoyed some of our garden produce for dinner- pizza topped with homegrown yellow courgette (plus pineapple and pepper) alongside homegrown salad. 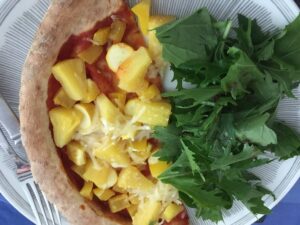