I’m still not over the novelty of parkrun being back in England (hold on Scotland and Wales- not long for you guys too I hope). 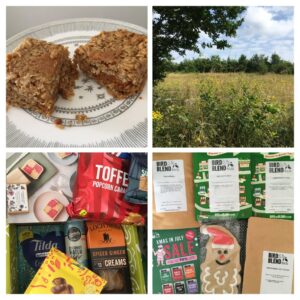 A few years ago we were in Canada and they had a huge Christmas in July celebration, with floats going past, food trucks, decorations, live music and other fun things, and ever since then I have really loved the idea. I think that this year in particular our government could have sorted something when they were going to have to “cancel” Christmas (eg more restrictions), but anyway- eg an extra bank holiday in the summer when cases were lower. Anyway, a few places seem to take it on board (eg Pret released their “normal” Christmas sandwich this year, not the delicious vegan one sadly), and Bird&Blend have been doing a Christmas in July sale for the past few years so of course I ordered some teas (some of them are usually only available for a month – eg Snowball which is black tea with coconut and vegan marshmallows). 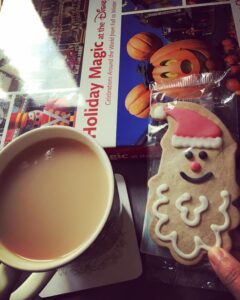 I’d saved this Santa gingerbread from December too

After spending all day Sunday at the festival, we drove home, getting back at 2am. The next day was really just a day of recovering and washing. I headed out on a run at lunch time, as it was meant to be cooler (it wasn’t), but mainly because I had not had anything to drink while at the festival (a few sips of water) as I have a bit of a fear over using portaloos, so I knew I was quite dehydrated and wanted to have a lot to drink in the morning before I went for a run. The run was hot as the sun came out and so I spent the rest of the day relaxing inside. 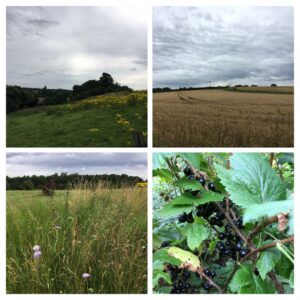 Views on my run and blackcurrants growing in the garden

The week was out of routine, as I’d usually do a longer run on the Sunday, but obviously didn’t. As it’s the holidays, I can be flexible, so in the week I did a couple of 5 mile runs and a 9 mile run, as well as lots of walks.

One day we headed down to Hastings to meet up with Andy’s family, as they were renting a house by the sea for the week. We had a lovely day walking by the sea, having a picnic on the cliff tops and generally enjoying all of the fresh air. I think they were a bit worried about me finding some food, but there seem to be vegan options everywhere so it wasn’t an issue. We found a nice bakery which had loads of options (vegan pasty, vegan sausage roll, vegetable bake things, even a vegan raspberry croissant). 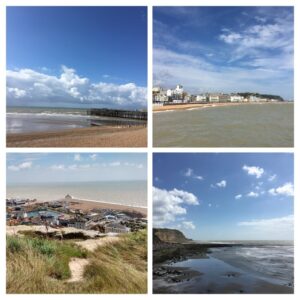 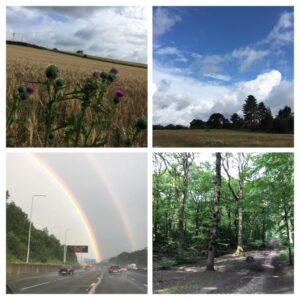 Run scenes and rainbows in our drive in a storm 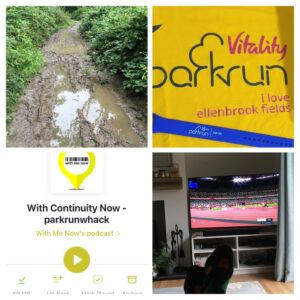 Muddy running route- but I have actually remembered to order some new trail shoes as my old ones have holes in them!

I was getting into the Olympics a lot too- I have a nice routine going of heading out on a run first thing, pottering around at home for a bit and then watching some of the coverage in the afternoon. Of course on Friday I had to get out my parkrun wristband again- DFYB people! When watching the Olympic highlights they mentioned that there was going to be a mixed triathlon relay, which intrigued us (who does which section? in which order? how does a team of 4 do an event with 3 sections?) and so we decided to stay up late and watch it- it didn’t start until 11.30pm and was around 90 minutes, so it was a bit of a late night before a parkrun, but it was so exciting. (And if you missed it, each team has 2 men and 2 women, and they each do a mini triathlon, in the same order- female- male- female- male. Sometimes these longer events can feel a bit samey, but it was so exciting as each section only seemed to last a few minutes before the next part of the race/ next transition/ next team member).

After the tourism of last weekend, I was really excited to be parkrunning closer to home this weekend- of course Ellenbrook Fields is not existing at the moment, but Jersey Farm had become another “home” event as it’s so close to where my parents live. I couldn’t remember what time I needed to leave to be there on time though! 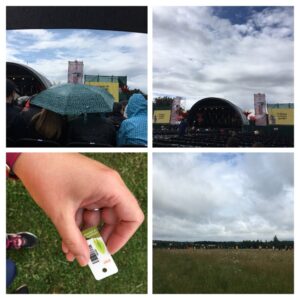 Comedy garden in and after the rain, parkrun token and parkrun field

We walked along to the start together, and it felt like a normal Saturday, in the best way. As Dad is a faster runner than I am, he would sometimes run off ahead, but he decided to run and chat with me, and it was great. The park was looking beautiful, covered in wildflowers with paths mown into the long grass. One of my club mates was doing her 100th parkrun (how frustrating to be so close to a milestone all during lockdown) so at the end we cheered her across the line too.

We walked back for breakfast in the garden, but I couldn’t hang about for too long as we had tickets for the comedy garden in St Albans in the afternoon. It was a bit of a shame, as originally Aisling Bea was meant to be in the line-up, but she had cancelled (been pinged?) so they had replaced her with Simon Amstell- we’d just seen pretty much an identical set from him at Latitude. Ah well. Kiri Pritchard-McLean was very funny as the compere, and Sara Pascoe was great as the headliner. It did rain a bit though- we were glad of our umbrella (we were in the back row so not blocking anyone, although most people put theirs up anyway). 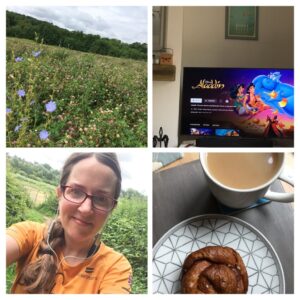 Sunday was time for a long run, this time 9 miles to Panshanger and back. In the afternoon, Andy was watching the Grand Prix so I went back to the tradition of watching something on Disney+ , this time Aladdin. I watched the original one, and it did make me laugh when I finished that it suggested the newer Aladdin. I mean, I can sort of see the logic, but I am not going to watch a shot for shot remake straight after watching that version.

Have you been enjoying the Olympics?

Are you a fan of Christmas in July? I was going to do some more things but as we were at the festival it didn’t pan out and I still have an unopened bag of chocolate lebkuchen that I saved!

4 thoughts on “Summer holiday time including Christmas in July and parkrun!”