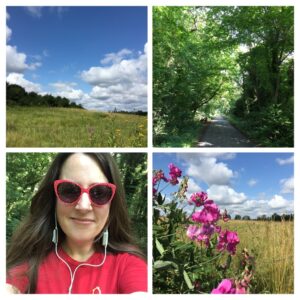 I was well and truly in the summer holiday mode by this point.  I did have to catch up on some work one day, but mainly I was properly recharging the batteries. I even had a couple of afternoon dozes (which is most unlike me) so I think the busy end of term/year had really worn me out. 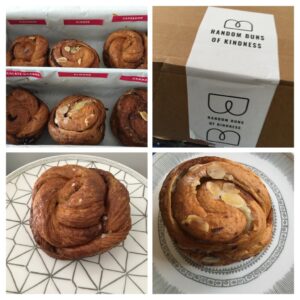 I had ordered us some buns to have over the weekend from Random Buns of Kindness– a plant based bakery. You could order different amounts and types, so I ordered a mixed box with some almond ones (amazing), cardamom (just like a bun from a Scandinavian bakery), plus one chocolate orange and one cinnamon one. They were really delicious and a real treat (they lasted a few days after the day of arrival, and you could warm them up in the oven for a few minutes too). 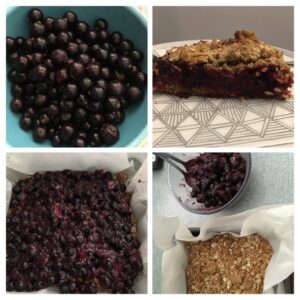 I did a bit of baking too. In the previous week I had picked around 400g blackcurrants from the bush in our garden, and in the end made these vegan crumble bars. They are very tasty but very tart (I just used blackcurrants but a mixture would make it sweeter). 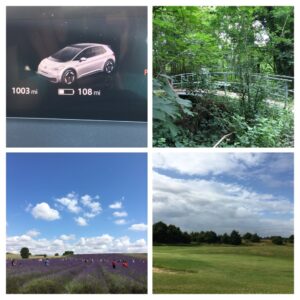 I checked the weather at the start of the week, and with Tuesday looking like the best day weather wise, I pre-booked a ticket to the lavender farm. I love going there- you can just wander around the fields or pay a few pounds more to pick some while you are there. Last year it was a bit different due to covid (there is usually a barn with a shop and café, but they were both closed), but this year they have come up with solutions- lots of trailers/ food truck type things in the main field, so you could get a drink/ buy lavender themed gifts without going inside. I did have a bit of a stress dream the night before about the car running out of battery (still getting used to it), but I had 118 miles left and when I got there after driving 18 miles, I still had 108 miles of battery left so I knew I would get home with plenty to spare. (I think the stress dream was linked to several news articles, as the climate spokesperson for the government had said that that a diesel car suited her better than an electric, saying the time it takes to stop and recharge on a long journey is too much- all then disputed because the range of most EV’s are over 200 miles, and if you are driving further than that then you should have a break for safety anyway. It made me so cross- in 9 years you won’t be able to buy a new petrol or diesel car so they really need to start encouraging and supporting people to switch over instead of complaining.). The journey tipped the car over 1000 miles too, but a weekend in Suffolk and the drive to Hastings would have made up a large portion of that. My annual mileage was usually fairly low (6-7000) but now we have one car instead of two it’s bound to go up a bit, as we would do the longer journeys in Andy’s car.

I realised when driving that I’d forgotten my water bottle. “Never mind”, I thought, “I’ll buy a lemonade from the café”. When I got there, I spent time picking the lavender first, and then made my way down to the shop and café. After queuing for a while, I was very sad when I found out they had run out of lavender lemonade- no drink for me! I was very thirsty by the time I got home.  (I could have queued up at a different place and got a hot drink, but I didn’t fancy something warm when the weather was so hot). 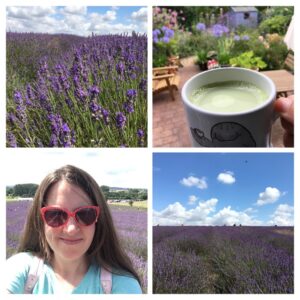 They did have two vegan cake options though (both chocolate, not sure on the difference), so I got a piece for us to share later on. 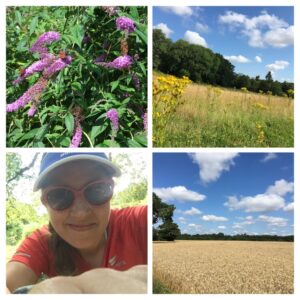 One day I decided to have a bit of a practise at a local parkrunday- Panshanger has changed the route, and now starts much closer to home. I’ve run to and from the start point, and attempted doing the new route, but I’ve tended to add bits on or not take the most direct route. Although I won’t be going there for a while, I thought I would run there, run the route (as best I could work out) and run home to see how long it would be.

It ended up being just over 2 miles to the start, so just over 7 miles. I think this is perfectly doable on a Saturday morning, as I would not need to leave very early, 2 miles would be a nice warm up, and then I could take my time on the 2 miles heading home after.  Also good to know that I can get to parkrun if Andy has the car.

The weather was so much nicer than forecast, so I decided to have breakfast in the garden. This is something I did a lot a few years ago, but got out of the habit and also just seemed to miss the best weather days (eg it can’t be too hot). 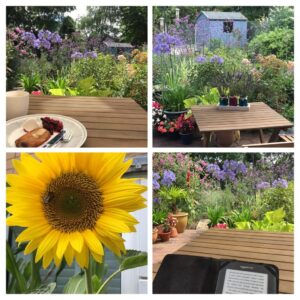 After some cleaning and admin bits, I decided to sit in the garden and read. I’m reading a book that is not that great to read before going to sleep (I’ll Be Gone in the Dark- we’d watched the documentary series based on it- the author Michelle McNamara looks into the case of the Golden State Killer from California in the 1970s and 1980s), so reading this in the sunshine felt like a better option.

One day I met up with a friend in Panshanger park- she drove over and met me in the car park, and we spent ages walking all the way through the park, up to the big old oak tree (450-500 years old!), down to the lakes and along the river, through the nature trail…. she’d not been before but loved it and am sure will head back. Then it was time to charge up the EV and get ready for a little holiday up to Scotland.

What sort of books do you like to read? I do like detective books but nothing too graphic as I read before I go to sleep! I also love travel books, eg Michael Palin or more recent “adventure” books such as Anna McNuff travelling tales.

Could you be tempted by an electric car?

2 thoughts on “The Lavender farm, baking and EV fun”