It was my turn to choose this week, and as Jersey Farm was not on due to another event taking place, I decided we should do some tourism and visit a different event. It wasn’t my NENDY (nearest event not done yet) as that is in London, but it is the easiest one to get to.

I picked up Dad and drove us there. We left plenty of time as I had read the car park was quite small, and we arrived just after 8.30 to a pretty empty car park. There was another car park through the other side of the park but that seemed to have access from a different road.

There were lots of decorated elephants around, so we had a nice wander around the park. We passed a sign for “corner corner” which on second reading was “conker corner”, and lots of volunteers setting up arrows. It seemed like a fairly small park, and it was hard to believe that it would fit in a parkrun in only 3 and a half laps, although it was filled with interesting parts- a lake, a play park, tennis courts and those outdoor exercise machines. 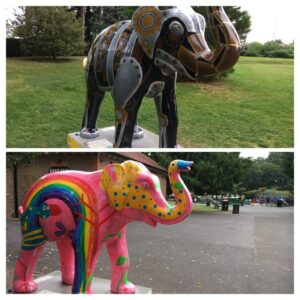 At around ten to 9 there were still only a few people stood around, but after the new runners briefing finished, we turned around to see a packed park. The run briefing was really clear due to the RD having a megaphone/ speaker system, and then we walked to the start. They had asked people to seed themselves, but the people with the signs were stood only a couple of metres apart- we were going to line up with the 30 minutes but we were not even half way back in the field so in the end we moved back. You’re only stood there for a few moments (and it really was- the RD said she had a whistle for the start and just as we had decided where to start, she blew it and everyone was off) but it feels better to have some space, not only now but anyway due to tripping etc. 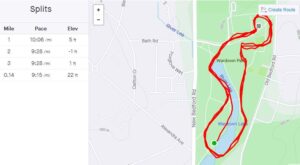 In the run brief they emphasised “the hill” as you had to run up it 4 times- to help keep count (once in each lap and then once in the final “bit”). The hill was even marked out, but it wasn’t really a hill- more of a short slope. But it did make the lap counting easier.

We did excellent negative splits of 10:06, 9:28, 9:28 and 9:15. The marshals were amazing- cheering everyone on in each lap. It really felt like a wonderful community and so encouraging.

The weather was good- it was chilly when we first got there but as soon as we started running I took my long sleeved top off. The sun even came out as we were driving home. 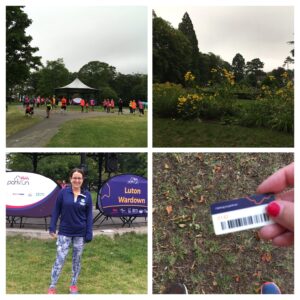 So that was my 240th parkrun- the next milestone is ever closer. But next week it’s Dad’s 200th, so it’s his choice of where we go (Jersey Farm and St Albans are both cancelled).