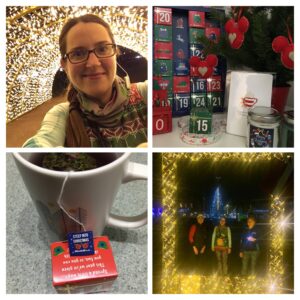 So, onto the final full week of term before Christmas (although for lots of other schools it seemed they were finishing on the Friday). Yoga wasn’t on, so I went along to the Wednesday evening run again, as they were doing another Christmas lights trail run. The weather was better than last time, and I enjoyed it just as much as before.  Because I was back so late (I think 8pm, and then had to have a shower and dinner) I didn’t think an early run the next morning would be sensible, so I switched and did morning runs on Tues and Fri that week.

On the Friday after work I had booked a shoulder massage, although it wasn’t until well after work was locked up, so I went to get the car washed in the time in between (it’s on my way home and there was no point going home as then I would have had to turn around and head back anyway). 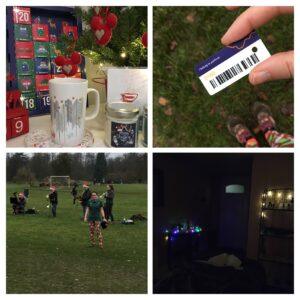 On Saturday, I’d suggested to Dad that we went to St Albans parkrun for a change. I’d not been there since 2017, and as it was where we started with parkrun it felt like a return was overdue. They have a new course now- it used to be run to the lake, 3 laps of the lake and then run back, but the paths by the lake kept flooding, and also the numbers got so big that they could not really accommodate that number of runners on such narrow paths.

The newer course is still 3 laps, but all on grass and slightly up and down. The corners were very sticky with mud and I was glad I’d worn trail shoes.

Before the start we were looking out for one of my dad’s friends who he had persuaded to come along. We didn’t see him, but I did get a “Dolly or Bev” from a fellow With Me Now listener, so we had a nice chat. The parkrun brass band were playing festive songs at the start and all the time that we were running, and loads of people were dressed in festive gear so it had a lovely atmosphere. At one point we were running behind a lady in a Christmas tree outfit and commented that if we wanted to be in the photos, that is where we should stay. I did laugh when I saw the pic (below) on their facebook page as the two of us were captured perfectly! 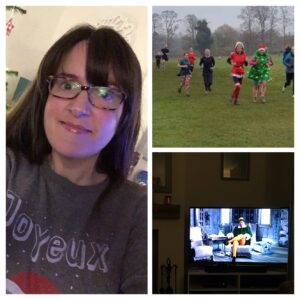 After we had finished running, we stood and listened to the band a bit more. We chatted to the WMN listener (Barnaby) and then Dad’s friend turned up- he had parked in the opposite end of the park so we hadn’t seen him as we’d been looking in the wrong direction.

In the afternoon I was off to get my hair cut, and then in the evening it was time for a Christmas classic, Elf. 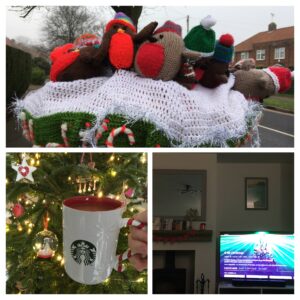 I did a shortish run on Sunday of 6 miles, as I had lots of Christmas preparation to be getting on with- finishing making cakes, putting on marzipan and icing so they would be ready to be decorated, We did have a walk later on and came across this amazing post box topper covered in knitted birds. I am so impressed with these- how they make the 3D is just so brilliant.

In the evening we watched a new film, 8 Bit Christmas, which I quite enjoyed (it was a father recounting his 80’s childhood where him and some friends were all desperate to get some sort of Nintendo thing). Better than Love Hard (the name, a cross between Die Hard and Love Actually, was misleading as it was just another romantic comedy), which we watched the previous week. 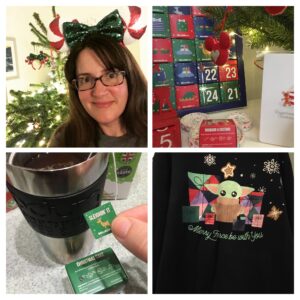 And so to the final few days of term. We had a little Christmas party (for the kids- literally an hour where they played musical statues and pin the nose on Rudolph- but they were all very excited) so I wore my Disney headband- twinning with my tree decoration! The teas in my advent calendar were keeping me going for the final push! 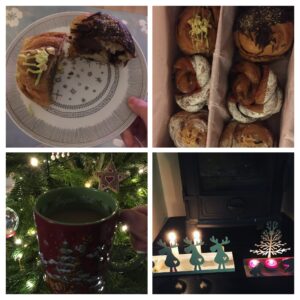 The Winter Solstice started with a run, and ended with lighting lots of candles. I love all of the traditions, and of course there’s lots of overlap with Christmas (let’s not get into why that is…), but the tradition of bringing in evergreen leaves into the home to remind us that nature is sleeping really resonates with me, and I do think we need to slow down at this time of year, although it can be harder to do that when people are rushing about doing Christmas preparations. I’d ordered some buns from Random Buns Of Kindness (a gorgeous vegan bakery) and so one was waiting for me when I got home too (well, two halves as we shared a toffee apple one and hazelnut truffle one).

And then the holidays were here!

I hope you had a good Christmas? Do you do anything to mark the winter solstice?