Back in the lockdown, parkrun announced that there would be no more New Year Day doubles (NYDD’s). Previously, parkruns could be on at different times on that day, giving people the chance to run at 2. For example, Panshanger used to start at 9am, and Ellenbrook Fields at 10.30, so you could run one, travel to the other one and run a second time. These were fun events, and as well as a local one I got to do a tourist one in Nottingham one year. However, I can completely see the reason why they stopped doing them- event teams were getting swamped with runners, and some people were rushing between events that were further and further apart, leading to safety concerns. Plus parks were getting full at later times, which could potentially upset local users who would turn up at 11am and find the park really busy.

So, this year, I had suggested Stevenage parkrun to my dad, as Panshanger was very flooded and Stevenage is mostly on paths. After arranging this, someone in my running club had suggested a run at Ellenbrook Fields later in the morning, so I asked my dad to drop me off at EF on our way back from Stevenage, and then I could either run home or Andy would pick me up. All sorted for a sort of NYDD. 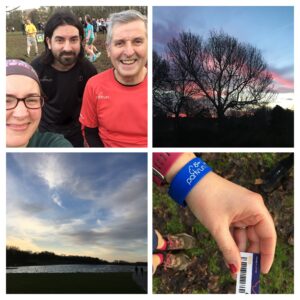 It’s a genetic thing that we just can’t all smile/ keep our eyes open etc for a photo. If I could do photoshop then I could mix some together. But this one made me laugh. Plus the NYD sunrise, the park before parkrun started and my finish token.

Lots of OH ladies were heading to Stevenage too, so it was really lovely way to begin the year. One of them (Emily), decorates stones, and presented me with a special 250 milestone pebble. She hides hers for others to find but I am keeping this one! 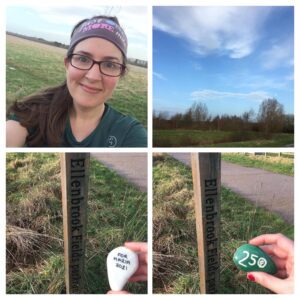 Stevenage was fab, and after a bit of stretching we headed back to the car so I could be dropped off at EF.  I ended up running by myself as one of the people I was meeting couldn’t make it in the end, and I wasn’t sure if others were there but slightly ahead. I had an enjoyable run on my own, and took a few photos of my parkrun pebble at my parkrun spiritual home.

It was a great start to the year. The following day was Sunday and I went out for my traditional Sunday long run. I felt so tired and so just did 6 miles, but when I got home and looked at my watch, it said 40 miles for the week (it keeps a total starting on Monday). Because of the previous Sunday being Boxing Day, I’d not run (we’d been on a walk instead), so I had then run on Monday (6.5 miles), Tuesday (5.5 miles), Wednesday (10 miles- the delayed long run) and Friday (5 miles) as well. No wonder I was tired as if I go over 25 miles that’s a big week for me! 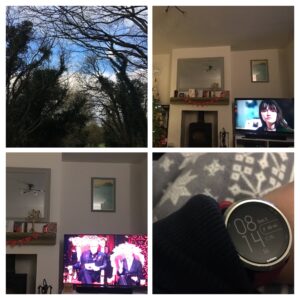 Thankfully there was lots of TV to catch up on- Taskmaster, Bake Off and Dopesick, so I could properly chill out. On NYD we watched a film, Summer of Soul, which was excellent, and really uplifting (better than Don’t Look Up which we watched on NYE and left me feeling so depressed). 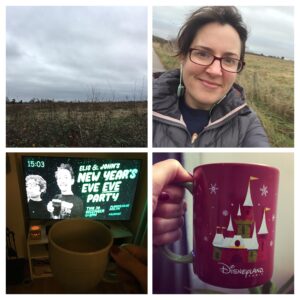 It had been a fairly chilled week other than all the running- we watched a live podcast show on New Year’s Eve Eve (accompanied with warm mulled orange juice), I had some nice walks when it wasn’t raining, and made the most of using my Christmas mug and bowl. 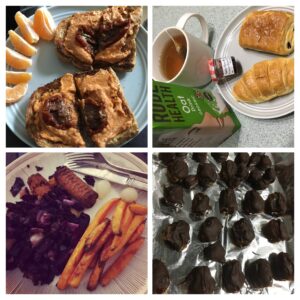 I pottered around at home lots too, making various snacks (including my favourite simple snack- cut dates in half, fill with peanut butter and then drizzle on melted dark chocolate), and doing some clearing out/ organising. 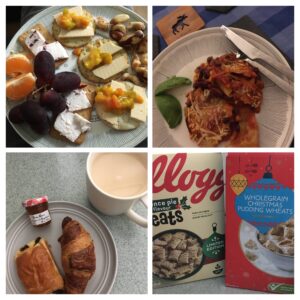 Andy had ordered some vegan cheese for us to try, and the Sheese Wensleydale with Cranberries was an outstanding winner. I was not a huge cheese fan, but I did always like this “Christmas cheese” and so am pleased to have an alternative that’s just as tasty. I made an enchilada casserole from my Virtual Vegan book (she has a lovely blog too, packed with fantastic recipes). 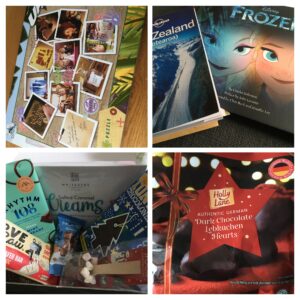 We made a start on our UP puzzle, I started reading some of my Christmas books, and of course ate lots of delicious chocolate- Andy got me a vegan selection box from the Vegan Kind supermarket and it had an excellent selection. 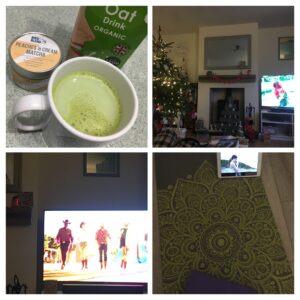 Before going back to work I made the most of our Christmas tree being up with some more cosy afternoons/ evenings in the living room- hooray for a new series of Queer Eye launching. Now the only problem is to not burn through it too quickly.

I also signed up for the Yoga with Adriene 30 day challenge. I have signed up the past few years and never completed it, because I would fall behind a day or two and then just give up/ get out of the habit. This year I am going to accept that it will take me longer than the 30 days. I started a day late, so I know I will always be behind which maybe is a good thing? I did a few in the mornings and then some late afternoons, and so far it’s going well.

I hope you had a good NYD/NYE. Did you ever make it to a parkrun double?

4 thoughts on “Not quite a new year day double parkrun”