I feel like my training (“training”- I mean long runs on Sundays) has been a bit all over the place for the Brighton half this year. I’m not sure if it’s because it was in the autumn last year, but it feels like I have ramped up quite quickly in January, although I was still running fairly long miles in December. My Sundays have been 10 miles at the end of December, then 6, 8, 10, 12, 11.  I quite like running a bit further than a half in training, but I haven’t managed it this time, so for the first weekend in February I decided to run a half distance just to check that I could. 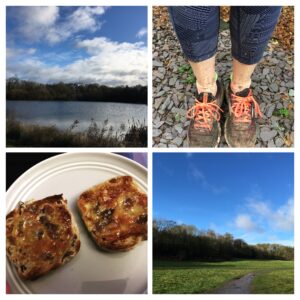 It hadn’t been that wet, and the previous week I’d worked out how to join up two out and back routes, so I ran out through Panshanger, around Hertford and then back via Cole Green Way. The rest of the run was OK but it was so muddy in Panshanger- I really should have worn my trail shoes as my normal road shoes aren’t that grippy.  It was quite tough as it was fairly windy too (nothing compared to these recent storms though). The lovely Planted Coffee co van was in the car park when I ran through so I bought a piece of rocky road to have later on- I thought it would be the best thing to be in my pocket for the rest of the run! Anyway, the run was OK, and at least I know I can run that far.

In the afternoon we watched a film (the new Ghostbusters- quite fun) and enjoyed a hot cross bun.

The rest of the week leading up to the Sunday was fine- I was still keeping up with the yoga, managing sessions on Monday, Wednesday, Saturday and Sunday. I do find the post run yoga really helpful so I must keep doing it. Thursday was a busy day as we had comedy tickets (delayed from March 2020, as everything seems to be at the moment). We were originally going to the Alban Arena, but they had found asbestos in the building to had changed it to a venue in Harpenden (close by). I had a meeting after work so it felt a bit of a rush to race home, quickly have dinner and head out again. I was also having the “joy” of daily LFT’s as I was deemed a close contact from someone at work, although thankfully her diligence in always wearing a mask and keeping her distance meant I was negative each time. 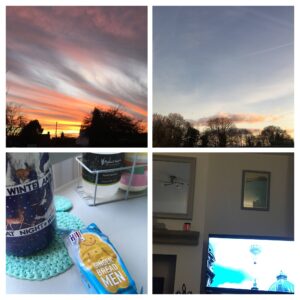 Sunsets, a gingerbread man and 80 Days Around the World

The evenings were definitely getting lighter, and I was treated to some beautiful sunsets from my window at work. I started watching the newest 80 Days Around the World, although I am disappointed that the theme tune is no as good as either the Michael Palin one or the cartoon version. 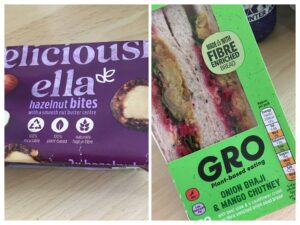 On Friday I had a lunch time meeting so decided to treat myself to a sandwich instead of making something. This one from Co-op was really nice- I usually opt for the hummus and falafel one but I was glad I opted for a change. My wellbeing buddy gave me those hazelnut bites and they are so tasty- a bit like a nakd bar in a ball with some nut butter in the middle.

Are you training for anything at the moment?

2 thoughts on “A training half marathon in the end”