The last weekend in January has always been the Big Garden Bird Watch (Birdwatch?) and this year was no exception. Due to Saturday being rather busy, I planned for it on Sunday morning after my run. 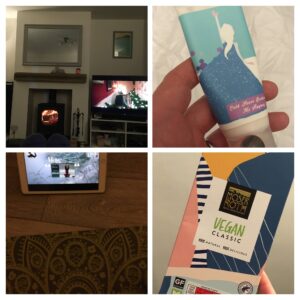 The week leading up to the final weekend in January was standard- some runs, and some yoga- a class and keeping up with the YWA. We also started on the new series of Dexter after it was recommended to us- we used to quite like it but the last few series went a bit off, but this new series was quite good (apart from the ghost character…).

On Saturday I had to be home and out fairly quickly, so opted for Panshanger. I’d not been there since Christmas when I marshalled, and Dad hadn’t been there since some time in the autumn, but he fancied a bit of a longer run, so I ran there, meeting him in a car park on the way. As we entered the park we could hear a woodpecker drumming, so stopped to try and spot it. I can never locate them but my dad is really good at this sort of thing, and saw it right at the top of a dead tree. We could see it moving around. The car park marshal commented that she could hear it but had never seen a woodpecker (never???) and so we tried to point it out to her but I am not sure if she was just being polite when she said she could see it. 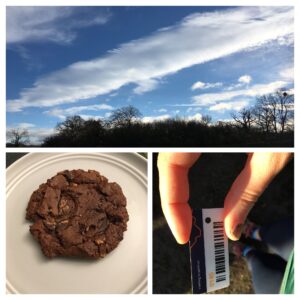 The parkrun was fab, not as muddy as we had expected and the park as usual was looking so pretty. We didn’t hang around at the finish and walked/jogged back to the car park.

I usually stop and start my watch but just left it running, and I was quite surprised that it totalled 8 miles by the time I got home. Dad was hoping to work up to a 10k but I think the car park was around a mile from home so I think he probably ran a 10k that morning.

Once home I had to rush around as I had an appointment at an Apple store about my phone (with a “genius”- I mean, I am not a big fan of tech companies and to call yourself that is just ridiculous). I was dreading it as my phone is old in the throwaway / get a new phone each year society that we live in (over 3 and a half years…) and the battery just sometimes drops like a stone. I was very much expecting them to pressure me into buying a new phone, so we were going to get a Pret lunch after as something to look forward to. Anyway, the appointment was actually OK (although I did get sort of told off when I went up to the counter at my appointment time as I hadn’t “checked in” with the people by the door. I mean, there were no signs saying that, there was nothing in the booking info that told me to do that… even when I went back to them to try and check in they didn’t seem that keen. But, the person I saw was more helpful, and didn’t try to make me get a new phone, and didn’t even say that the battery needed replacing just yet. I was even quite pleased when he examined it and wrote in his notes that it was in excellent condition. Yes thank you it is.

The Pret didn’t have the best vegan options (our usual order now is to share the hummus wrap and the avocado flatbread so we get a bit of each) and had to make do with the olive baguette thing, but at least they had the cookies in stock.

We then didn’t have a great deal of time at home (just time to do some cleaning, oh the joy) before heading over to Andy’s parents as it was his dad’s birthday. 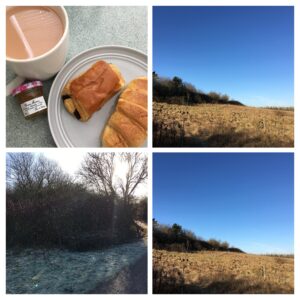 On Sunday morning it was frosty as I set off for my long run- 11 miles along Cole Green Way (an old railway line) to Hertford. I usually stop a bit short of Hertford itself, but decided to carry on to see where it eventually pops out. I was quite pleased to see that it was close to the centre, and would be easy to make it into a looped route by running back through Panshanger. I did an out and back as I think that going back through the park would have cut it shorter and I wanted to do the 11 miles and not have to add on bits when I got closer to home. 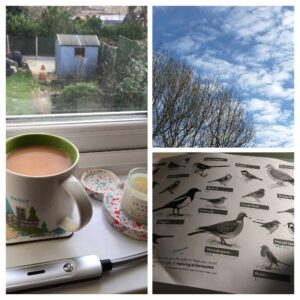 Once I’d showered and had breakfast I got ready for the bird watch. Last year I watched from my living room, but some of the shrubs have got really big and obscure some of the garden, so I decided to watch from upstairs as then I can see most of the garden. It did mean standing up for the hour but maybe that’s better than sitting and getting stiff after a long run? I saw lots of birds including loads of sparrows, some blue tits and great tits, starlings, a blackbird, a robin, a few parakeets, lots of pigeons and even a red kite flying above (we get lots of them around here now).

Once that was over I had to get on with some work, but I did break for a yoga session- I think I managed 4 that week plus my yoga class so at least I am being fairly consistent with it. It’s the furthest I’ve got through one of these challenges still, and doing some after a long run is really helpful.

Do you ever join in with things like the bird watch or butterfly watch?