A couple of years ago, WGC created a 20km circular route around the city, to mark the centenary. In the first lockdown I started to explore the paths and eventually joined them all up, and often used part of it as a running route. However, the parts close to me are quite muddy so I’ve not been on them during the winter at all. 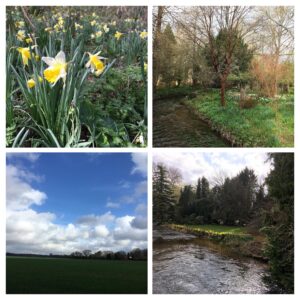 On the Sunday following my Finsbury Park trip, I decided to rectify that and head out on part of the route. It was a beautiful sunny day and most of the paths were fine (a few small muddy patches here or there, but no need for trail shoes). I had forgotten quite how hilly it is though! I don’t think there’s a good way to run it, but I tend to run anti-clockwise as I think the hills are slightly less steep in that direction.

I enjoyed most of it, although when I was running though some fields I kept hearing shots (like bird scarers but more frequent) and realised I must have been near a clay pigeon shooting range or something, which made it not very relaxing.  Also, near the end I had one not very nice dog encounter (and I did pass lots of other dogs that were either on leads or their owners distracted them while I ran past). I was running down a path and a dog raced over to me, barking. The owner was way back and not paying much attention. I stood still and it growled as it got closer and then sort of shoulder barged into my leg- it was very strange. I called to the owner to control his dog, and he raised his hands and laughed in a sarcastic way, saying “she’s not usually like that”. I did tell him that it didn’t matter if she wasn’t normally like that, but she just really hurt me (my knee sort of twisted and is still a bit sore a few weeks later) and she should be on a lead if she can’t be safe around others. Honestly, I know it’s a small minority of dog owners but they really impact negatively on my impression of dog owners. 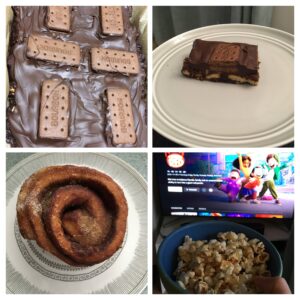 Anyway, the rest of the run was good. Once home it was time for an amazing cinnamon bun (we’d picked it up on the way back from the station the day before) and then time to get on with some baking. I hadn’t baked for ages and really fancied it- I made bourbon biscuit tiffin from the Slice of Sunshine blog, and it was very tasty indeed.

After the usual weekend errands we settled down for a movie- Turning Red, which I really enjoyed. It reminded me a lot of Studio Ghibli films- not just the panda being like Totoro but the style of music too.