We were meant to be going to DLP for New Year’s but of course what with one thing and another, we had to re-book our trip, so on the Tuesday of half term we headed into London to get the Eurostar. 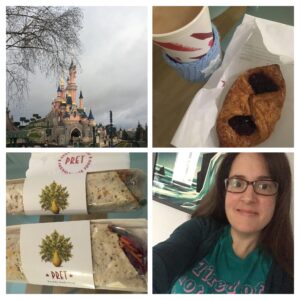 The perfect time to wear my Magic Moon “Tired of Not Being at Disney top”! Our train was after lunch time, and usually you can get there fairly soon before the departure time, but the Covid and Brexit checks meant getting there earlier. We got a Leon for lunch, and then picked up sandwiches from Pret to have for dinner once we arrived. I also got a raspberry croissant to have for breakfast the following day because I love them and who knows what I’d find for breakfast in the supermarket.

Our journey was really good- we got some of those proper filtering masks to wear on the train, and then the transfer in Paris was fine (you have to do a stop on the underground, and then get a train out to Disney), and we got to our Air BnB sooner than we thought- enough time for dinner and then to walk over to the supermarket. Our apartment was close to Val D’Europe, a huge shopping centre one stop on the train (or just over a mile walk) from Disney.

We were up bright and early on our first day and got to the parks for some of the magic hours. We managed to do lots of rides, although we queued outside the Phantom Manor for ages before giving up because it seemed it had broken down before the day had even started. Across our 3 days we did pretty much all the rides several times (I think a record on Haunted Mansion in the end, as it often has huge queues). 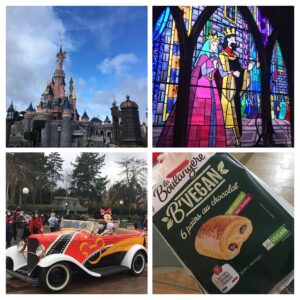 The work on the castle had finished, so it was completely cleared (in October it was still behind lots of screens) and we could visit the stained glass windows inside. The parades were back, as well as the little impromptu mini ones. Most excitingly, I found vegan croissants in the supermarket! 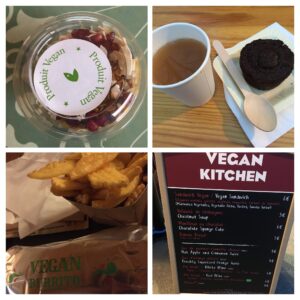 The vegan food options are improving all of the time. They had some food trucks (which before we’d seen as part of the Christmas market) and there was one vegan kitchen that had all options. We got some butternut squash soup from another truck one day, and I sampled the vegan sandwich (tasty), the mulled apple juice (so good on a cold evening) and the warm chocolate cake. I even tried some roasted chestnuts one day- I’d never had them before and quite liked them-more like sweet potatoes than nuts, but again good and warming. The vegan wrap was still available in the main park, and Pret was finally open in the station. One day I managed to get a sandwich in there (a baguette with avocado, sundried tomatoes, olives, rocket and pine nuts) but another day there were no vegan sandwiches, so I got the sunshine pot instead. 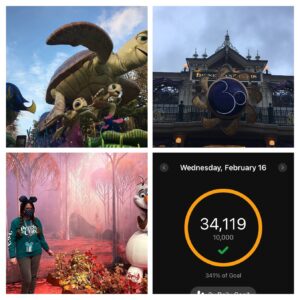 One day I met Olaf- at this point you had to have masks on and had to keep your distance, but now they have changed the rules again and the “proper” meets were back on. I think I prefer them at the distance though! 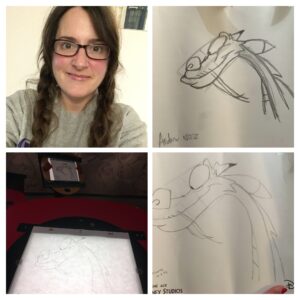 A little windswept from being outside all day! On the first day I didn’t tie my hair up and regretted it when it was so very tangled…

I was keen to do the drawing again, and this time we got to do Mushu from Mulan. I think we both did pretty well!

We were in the parks until closing time each day, so we tended to wander into the village in the afternoon to get a drink from Starbucks (seriously, even if you want a cup of tea, go and get one from there because the cups in the park are tiny and they just don’t make tea properly either!). Once we walked back to our apartment, we had time to watch an episode of Inventing Anna while having a cup of tea- not quite so Disney!

As well as the parades, there was a fireworks show, and it felt properly like Disney. It was a lot of projections on the castle, as well as some fireworks and other things like lasers and flames. We had to keep masks on the whole time, but they had removed the distancing markers in the queues. It felt OK- I think I am slowly getting more used to crowds, but also the fact that everyone’s vaccine status is checked before you go in makes me feel a bit more comfortable too. 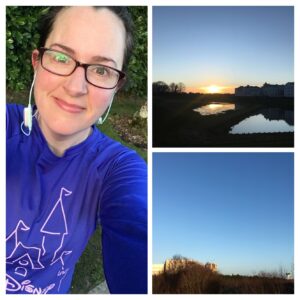 On Saturday we had to head into Paris to get our train home, but we were in no rush so I went out for a run in the morning, alongside the parks and then around the buildings near to our apartment. It was a gorgeous morning ( but very cold) and of course I wore a Run Disney top. I don’t think the Paris runs are coming to 2022 but I can keep hoping for 2023!