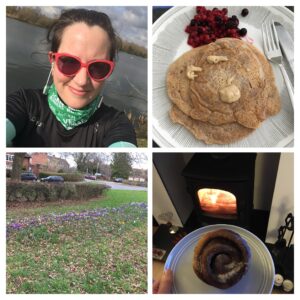 On Sunday morning I had a lovely 8 mile run. It started off in the sunshine but by the end it was quite cloudy. I saw loads of crocus flowers and some daffodils and blossom- it was starting to feel very spring-like. I had pancakes once home- I’d not made them for ages so it felt like a lovely treat.

I then made the mistake of suggesting the new West Side Story as an afternoon movie, as I’d seen it was on Disney Plus. Let’s just say, it turns out that Muppets Most Wanted is more my style of musical I thought (wrongly) it was going to be modernised- and I thought that a modern twist on the story (immigration etc) would be interesting, but no, it was just a remake. I had bought a cinnamon bun from the coffee shop in town, and it was cold enough to have the fire on, so it wasn’t all bad! 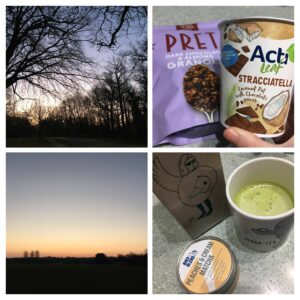 My early morning runs were also seeing the signs of spring, as the sunrise it about to appear at times. 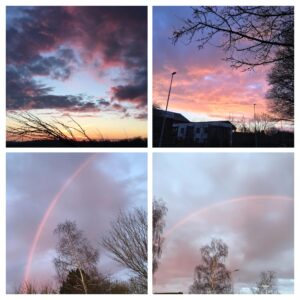 One morning I had the most amazing run. I started to see this pink line in the sky, and wondered if it was the trail from a plane being lit up by the sunrise, but it appeared stronger as I ran, and got more and more arched. I realised after a while that it was a rainbow- it wasn’t raining at that point but there were a few drops as I got closer to home. I just kept taking photos of it and stopping as it was so beautiful. It set my day up so well.

Have you ever seen a pink rainbow? I’ve seen the upside down rainbows before (something to do with ice crystals I think).