For the last few years, our running club has had a December challenge, and one of those challenges was to set goals for the following year. One of my goals this year was to stretch/ do yoga more regularly than my once a week yoga class. I know it’s good for my body, but it is also good for my mind to slow down and relax.

In previous years I’ve started the YWA January challenge, but I’ve never even made it half the way through. I decided I needed to be realistic with myself. No matter what people say, sometimes finding 20 minutes to do some yoga is just too hard. I have meetings after work, I have work to mark and other bits to do. Obviously you can’t do yoga after eating, so it just gets harder to find the time, and I think if I didn’t do one day before, I’d be a bit disheartened and then stop. This year I decided to follow it, but just not worry if I was a few days behind. In the end, I finished it right at the end of February, so it took me 2 months rather than one, but I worked through every session.

The other thing that helped were the length of the sessions- they were usually around 20 minutes, but some being 30 minutes, whereas in previous years some have been 40 minutes or a bit more. On the face of it that doesn’t sound like much, but actually finding the time for them is much harder.

I’d also signed up to the daily emails so I got a prompt, and could find the next unread email to see where I had got up to.

I tended to do them on Monday and Friday mornings, and Saturday and Sunday afternoons. I found the Sunday afternoon session particularly helpful after doing a Sunday long run, so I will definitely keep up with that, and see if I can do a session or two in the week as well. 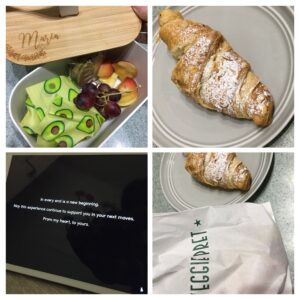 Vegan re-usable food wrap from my vegan monthly box, the most delicious almond croissant from Veggie Pret, and the message at the end of the YWA month.

The final session was the Monday after the half marathon, and turned out to be a freestyle one where you followed your body. I ended doing a fair bit of foam rolling as well as stretches as my legs really needed it.

On the subject of self care, I also got a delivery of hair syrup- a pre wash treatment for your hair. I’d been keen to try it for a while but they are one of those small shops that restock every now and then. The main reason I wanted to give them a go is because you put it onto dry hair. I’ve used a few that go onto wet hair but it’s a pain to get your hair wet, put it on and then sit around with wet hair for ages. 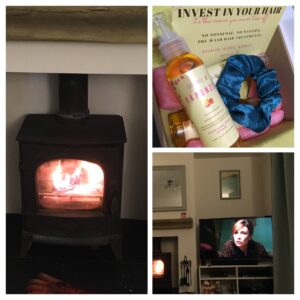 I can now get home from work, put it on, have a cup of tea and then got for a shower and wash my hair later on. It was chilly enough the other week to put the fire on, which did help to dry my hair after I’d washed it!