For the middle Saturday of our Ireland trip we had a fab Air B’n’B in Killarney (staying from the Wednesday to Sunday) so I had plenty of time to figure out where the parkrun was. The parkrun is located in the grounds of Killarney House, right in the centre of the town. We were staying 2 miles from the centre, but a very easy route (straight down to the main road for about 3/4 of a mile, then along the main road until the park entrance) and I’d run there earlier in the week to check. I left with plenty of time and arrived with time to take photos, hear the run briefing and soak up the atmosphere. 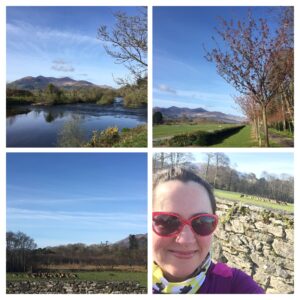 I saw deer in the field on the way to parkrun!

The weather was gorgeous. Bright blue skies, a little breezy and perfect running weather. I wore a long sleeved top over my t-shirt and found a bench to leave it on during parkrun. The parkrun was just so scenic too with views of the mountains surrounding it. 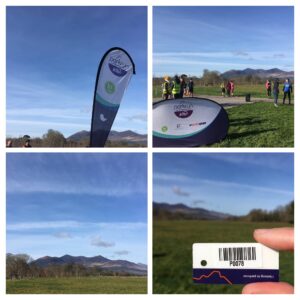 It was a perfect example of a small but perfectly formed parkrun- 126 runners on average- the week I was there they had lots of people from the Cork & Kerry Sanctuary Runners- they posed for a team photo and had a shout out at the start. There were friendly marshals on the way around, and the run report was the most detailed that I’d read– I was included in a list of shout outs (from the club with the longest name!) and they even listed the total number of parkruns that I’d been to. Very detailed. 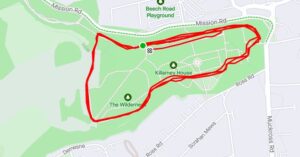 It was just over 2 laps as hopefully you can see in the map- very simple to follow. The grounds were totally flat and you just had lovely views whichever way you were facing. It was varied, with an avenue of cherry trees to run through, some more open fields and a shaded path near the edge of the park. 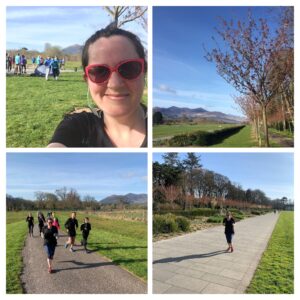 The bottom two photos were from their facebook page- the person doing the run report had even worked out a picture to link with the text about my running club which was very impressive!

I couldn’t hang around at the end as it was Andy’s birthday (the Grand Prix qualifying was on so happily he was fine with me heading out to parkrun) and we had plans for the afternoon. I ran the two miles back as a cooldown (may have walked up the steep hill to our cottage) before we got on with the rest of our day. 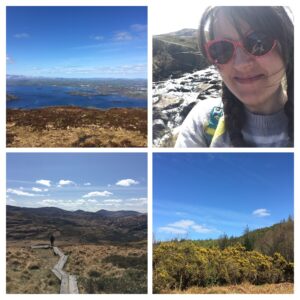 We drove to nearby carpark and then hiked 2 miles uphill on a mixture of rocky paths and boardwalks with quite a few fake summits- thankfully to be rewarded with the most amazing views of the lake. We had to rest for a while at the top before going back down as some of it was quite steep (a little scrambling on rocks here and there) and the 7 miles run from earlier had tired me out a bit!

So there we go- my 82nd different parkrun venue.

Do you like to visit parkruns while you are on holiday? I know I am lucky as there are lots close to me (within an hour say) but a lot of my touring has been if I’ve been somewhere else for the weekend and have been to the closest one- all of those are adding up. It doesn’t always work out- last year in Scotland we were there when they restarted, but the closest one was over an hour away and it just didn’t fit with our plans (we had to check out that day and head in the opposite direction to where the nearest one was) so I had to skip parkrun that week.