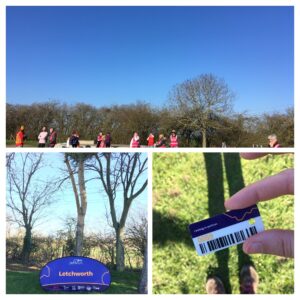 A few weeks ago, Jersey Farm parkrun was cancelled, and Dad was around, so we decided to head up to Letchworth, as he’d not been there before. I’d been a couple of times, and thought he’d like it as it’s off road, fairly small in numbers with nice scenery. The morning was beautiful, we had a fab first timers welcome and in the main briefing warned about the ruts in the field. I remembered these from a previous visit where the ground was frozen so the ruts from the tractor tyres were huge and solid. Anyway, we were happily running along, navigated the corner (I think they called it calamity corner?) but heading up the hill on the field I suddenly found myself on the ground. I have fallen over a few times when running (the last was a few years ago so it’s not like I trip all the time) but it’s always such a shock. Of course Dad was there to help me up, and a couple of other parkrunners stopped too, to check I was OK. I felt OK (one of the guys who stopped made me check both elbows but they were fine), so we walked for a bit and then continued to run. It’s a two lap course and thankfully I managed the second lap OK, and towards the finish the guy checked that I was OK again which was lovely. We finished (30:05- not bad considering we walked for a bit) and then took our time heading back to the car. I had breakfast with my parents, but when I got home later and had a shower I realised I had quite a bit bruise on my hip, and some scratches and bruises on one knee. 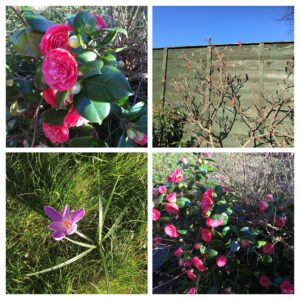 I did some gardening (the weather was so beautiful it was a shame to waste it) but maybe that wasn’t the best idea, because as the day wore on I was quite stiff and sore (Andy even made me take another LFT just in case I was aching for a different reason- it was negative though). 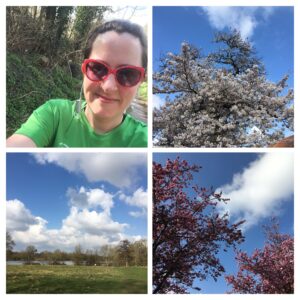 I took it gently on Sunday and did 7 miles- that was plenty! Again it was so beautiful outside I had to make the most of the weather. I did a bit of yoga in the afternoon to help with the aches too, and felt a bit better after. 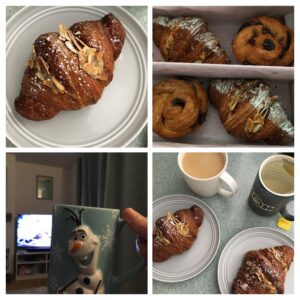 Now, you may already know that I am a huge fan of almond croissants- give me anything that tastes like marzipan please! You can’t get vegan ones in many places, but Random Buns of Kindness have started making them, so I had ordered us a box (with some other things too)- we warmed them in the oven for breakfast on Sunday and they did not disappoint- they were amazing. If only I lived in Norwich I’d be there all the time!