For the Easter holidays, the two of us had planned a trip to Ireland. Neither of us had ever been, and so we mapped out a road trip, beginning and ending in Dublin, but taking in a lot of the Ireland (NI and ROI). Andy is usually in charge of holiday itineraries, and with parkrun I try to manage to get to one if possible, but it doesn’t always happen and that’s fine. Happily he mentioned to me that every Saturday we would be somewhere with a parkrun- result! 3 more parkruns to visit!

We flew to Dublin on the Friday evening (which I found very stressful, having not flown for a couple of years, and finding the experience stressful pre-pandemic), and our flight was delayed taking off so we didn’t check into our hotel until gone midnight. In Ireland the parkruns don’t start until 9:30am, so it meant I had a bit more time in the morning. After my disaster going to Finsbury park (I went the wrong way out of the train station) I realised I needed to be more prepared, so I had written out instructions from our hotel to Poolbeg parkrun, the closest one to our hotel- around 4km away, so a nice warm up and cool down. I loaded up the map onto my phone, put in my headphones and headed off. Andy told me he had every confidence in me (clearly a mistake) and reminded me to look at my surroundings on the way so I would recognise the way back.  It was fairly straightforward- a lot of “go straight on”, so when the maps stopped talking to me in my ears I didn’t think anything of it at first. I kept turning around and looking behind me to see landmarks that could help me find my way back later. I had seen some of the landmarks on my piece of paper, and thought I might be parallel to the route I’d mapped out. However, after 2 miles I stopped and found out that despite getting the “welcome to Ireland” text, roaming was in fact not working, and I’d not thought to download the maps so they worked offline. I tried to head back the way I had some, but it was no use, I was around 2 miles from the parkrun, at around 9:10, and with no way to navigate there. I could have just run back to the hotel, but I really didn’t want to miss parkrun- being so near to one and with it planned in just seemed like such a waste. 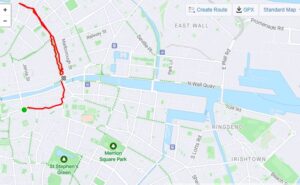 I was actually aiming for bottom right of this map- where it says Irishtown. So yes, I was lost. Also, when I went to save this, the title “lost” was already taken. That’s saying something!

By some stroke of luck I ran past a queue of taxis, so then had a bit of a back and forwards (ask a taxi driver, “are you taking fares?”, no, but he is, ask him “do you take credit cards as I have no cash?”, no, but he does…), finally finding one who would take me. He was so friendly, and very amused that I had got lost running- it took a while for me to explain I was running to an organised run. He tried a couple of places as I could not load up the website to give instructions (and my paper instructions were no good to anybody), and then when we finally arrived the credit card machine wouldn’t work at first. It was by this point 9:30am and I was still half a mile from the start- I dashed out of the taxi and as I ran past some people walking asked them if they knew where the parkrun started. “Keep going to the end of this path and then turn left, but you’ve missed the start” thy told me, and I called back that hopefully I could catch up with the tail walker. As I rounded the corner I was so relieved to see a group of runners and high viz covered volunteers still stood around- the briefing was still going on! I hadn’t missed it!!! 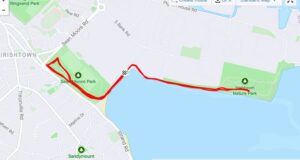 It didn’t start until 9:40, so I had a chance to catch my breath and calm down (I really was panicked) and then I could enjoy the parkrun- my first in Ireland. It was really beautiful by the water- there was a big power station (or electricity factory as I called it), and the course ran around a small park, out and back along the bay and then through the park again.  The out and back part along the coast had a fairly steep hill on the out section, which you got to run back down again on the way back, so I took a few photos there- it was so pretty with the sun shining off the water, even on an overcast day. 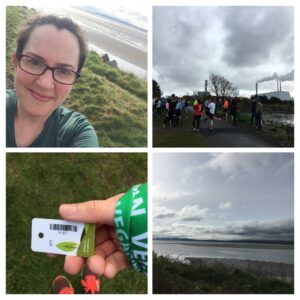 It was a speedy one- I was 77th out of 84 finishers, and the tail walker finished in 42 minutes (obviously this could be different each week) so I was glad I didn’t start behind as it would have been hard to catch up!

At this point I thought that text messages were still working but the internet wasn’t (due to me receiving the welcome text) so I sent one to Andy telling him it started late so I’d be back later than expected, only of course that message didn’t send. I then had to somehow get back to our hotel….

I looked at my handwritten notes and tried to work them out in reverse- I could picture the map so knew I needed to keep the coast on my right and gradually head left and up, but basically I would run along for a bit, stop and ask someone “which way to the city centre please?” and then head off in the direction that I was pointed in. When I was closer to the centre I found a council worker in a high viz jacket and so I asked him for directions to our hotel, and he gave me excellent directions (and even made me repeat them so I didn’t get muddled)- I was so relieved to see some of the shops that I had spotted earlier on. That run ended up being 3.5 miles- you can see below that I didn’t take the most direct route (and went totally wrong once) but thankfully all the people I asked pointed me in the right direction and I made it back. 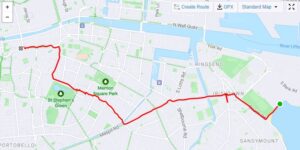 Andy was rather worried as I had estimated I would be back at around 10:30 but the late start combined with the longer run back meant it was nearly 11am by the time I got back. Time for a quick shower and then a walk to get some breakfast (delicious acai bowl)- on Friday we’d had a sandwich in the airport at around 6.30pm and that felt like a long time ago by this point!

So, more lessons learned (always download the map so it works offline….) but my 81st different parkrun visited, my 6th parkrun country, and another really enjoyable course.

Are you good at navigating? I have the worst sense of direction.