In March 2018 I started looking at completing the parkrun alphabet. Back then I had been to 38 different events and so had filled in lots of the letters without trying. However I still needed D, I, J, K, N, O, Q, U, V, Y and Z. Quite a few!

I could tick off a few fairly easily- I drove to Oak Hill one Saturday, Northala Fields a few weeks later, and managed to go to York parkrun as we stopped there on a journey back from Scotland. A few weeks after that I drove to Upton Court, and then we had a weekend in London (seeing The Muppets Take on the O2) and originally I was going to do Victoria Dock, but it was cancelled, so I went to Valentine’s. Ticking those letters off nicely. 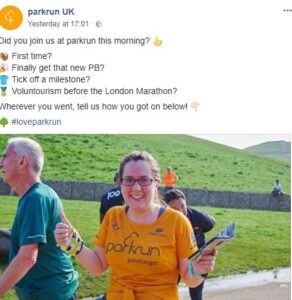 Bruce Li was at Northala Fields taking photos when I visited, so here I am just finishing and getting my phone out to take a picture!

We often head to Bath Christmas markets and I would do a parkrun on the way, so my D was at Dinton Pastures in November 2018, and then a few weeks later Jersey Farm parkrun started less than a mile from my parents home, so I had the first of many visits for my J.  A trip to Southampton in April 2019 meant I could head off and run at Queen Elizabeth, and later a weekend in Kent in May 2019 meant I could visit Kingdom (and meet Danny Norman from With Me Now as he happened to be there at the same time).

So most letters ticked off after just over a year of trying to find ways to incorporate the tourism into weekends away or touring slightly further from home (I feel like a hour drive from home is the most I’ll go realistically unless it’s for a super special occasion). Kingdom was my 62nd parkrun location so I had done lots of other touring too, and the alphabet was ticking along nicely when I got the opportunity to visit another letter.

All I had left at this point was I and Z. 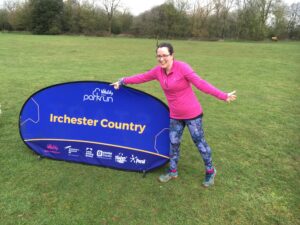 Pointing at the I as my UK parkrun alphabet was completed with that letter!

There were not that many I’s, and none near at all, but then Irchester Country parkrun started. It looked wonderful too (one lap, woods) and I managed to persuade my dad to come along. It was the final parkrun before the pandemic pause, and it did have a bit of a strange feel with people keeping their distance a bit more. However I loved the route and would happily go back. Despite the strange feeling that parkrun was going to stop for a few weeks (how little we knew) I was happy to complete my UK parkrun alphabet. I had seen that Zuiderpark parkrun had just started as The Netherlands had opened as a new parkrun country, and was hoping to get the Eurostar over there during the Easter 2020 break. Of course, the world had other plans….

Are you trying to complete the parkrun alphabet? Or have you finished it? Do you like this sort of challenge?