I am not sure what has happened to the year but somehow we are half way through. Weekends are suddenly much busier (and not just with parkruns to go to- can you believe that this time last year they weren’t back yet?), particularly with a slew of previously cancelled in 2020 things that have been rearranged and are finally on. I don’t know how I used to cope with busy weekends because at the moment I am behind with everything.

So, rewind back to May. 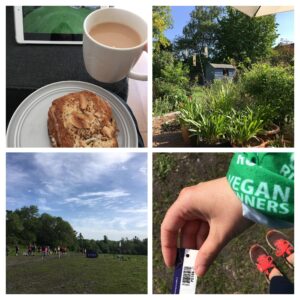 After our fab weekend to Brighton for my birthday, I was back at Jersey Farm with my dad the following weekend. They were on their summer course which is two slightly different laps- an outer and inner lap. 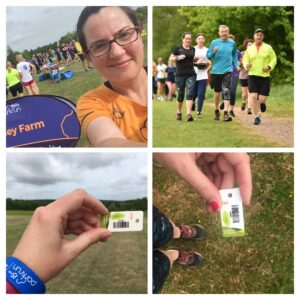 Two lots of tokens for two different weekends plus me running with Dad (he’s in the blue next to me)- having a chat as we run as usual!

I think it seems harder as you can see further up the hill beyond you on the meadow part, whereas the winter course is along narrow bridle paths so you can’t see how much further you have to go. Anyway, it’s so pretty, as they let the grass grow long in the meadows, and you get two different sets of views.

While it isn’t Ellenbrook Fields and never will be, we often see people we know there now (usually from OH ladies) so it does feel more like a community event as we get to see more familiar faces- we know a few of the regular marshals too and often will wait around for a bit and cheer in other people that we know.

One weekend my dad was away, so I did the parkrun sandwich by running to and from Panshanger.

Sunday mornings have been filled with runs of various lengths- I quite like 10 miles but sometimes they are shorter if I either get up late (it’s the one day I don’t usually set an alarm) or if I have somewhere to be. I have started going on the 20/20 route again and one weekend did 11 miles (most of it on that loop)- I had forgotten how hilly it was though, so not for any sort of speedy run. I would quite like to do the whole thing again (just over 13 miles) so I will look at doing that at some point this summer. 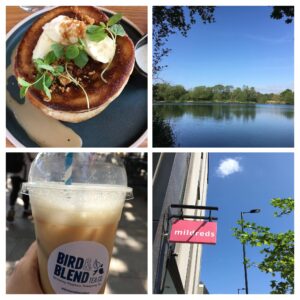 Mildred’s pancakes, the lake on my run at Stanborough, iced chai and the blue skies of London.

One Sunday rather excitingly I was heading into London to meet with a couple of my friends. We often meet for afternoon tea but had not managed to catch up since last summer/autumn. We had booked to go to Mildred’s as we had aimed to go there once before but it was closed due to a leak or something. It used to be a veggie restaurant but is now 100% vegan which means lots of options for me, hoorah! (Happily my two friends are very happy to go somewhere like this even though they are not vegan). As the trains weren’t that regular I had some time before our table and so walked up to the Bird and Blend store in Angel (the Mildred’s we went to was at Kings Cross). They had launched their tea wall and Butter Brew, previously a limited edition, was now a permanent fixture. I had taken along an empty tin (you get 10% off if you bring a tin to refill) and of course had to get an iced chai because they are just the best.

When we got to Mildred’s they served brunch until 3pm, so I opted for pancakes (you know how much I love pancakes)- my friends ordered a main and then pudding but I was happy with mine- banana and butterscotch which was really delicious, plus carrot and ginger juice. It was so good to catch up, although the train home was not so good as it turned out Arsenal had been playing so the train was full of lots of sweaty football fans- I was glad of my mask!

We also had a night out in May- how exciting! Andy had booked a surprise for my birthday, and had just told me we would have dinner at home and then head off. We ended up driving to Stevenage, to a theatre I didn’t know existed, for “An evening with Mortimer and Whitehouse”. It was wonderful- so funny and uplifting. We didn’t get to see Athletico Mince (Bob Mortimer’s comedy podcast) as we had tickets for March 2020 but rather than reschedule they just cancelled, so this was a sort of replacement and brilliant.

How is this year going for you?