The train line from WGC to London goes through Alexandra Palace so quite often I’ve looked out of the window at the big TV aerial, but I’ve never been to it. I really enjoyed my mini parkrun tourism to Finsbury park (also on the same line) so I decided that I’d head to Ally Pally this summer. They were cancelled on many weekends, so my only option was 9th July, and I got chatting to two running friends who fancied heading there too, so a date was booked.

To get to Alexandra Palace train station means taking a slow train, as the fast ones don’t stop there. It also meant there was only one train every half an hour, and the last possible one was around 8am getting in just after 8.30, meaning that if that was cancelled or delayed, the train after that would be too late. Happily my co-tourists agreed that the 7.30 train was not ridiculous but sensible, so we met on the train (I ran to the station, they drove to Hatfield and got on there).

The park is right by the train station, so we had plenty of time to wander around, walk up to the palace, admire the views across London, look at the ducklings in the lake and find out that no toilets were open before 9am. (This is fine for me because I hate using public toilets, but could be useful info for others).

At around 8:45 we wandered down to the start line and there was hardly anyone around! I wondered if because they had been off for a few weeks people had gone elsewhere, but it was a proper flash-mob parkrun in that one the new runners welcome was finished, it was packed (274 runners in a fairly narrow start). 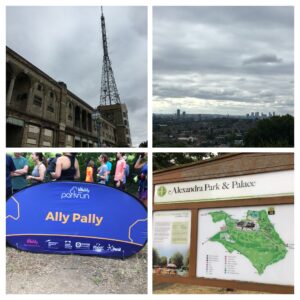 They told us it was their summer route, essentially two laps but starting in the centre. You ran out from the centre, did two laps, and then ran back in to the start/finish (in the opposite direction). It was really varied, with parts of it being through open meadows, with views up to the palace, and parts in woods which were lovely and cool. Some of it was on tarmac paths, but some were dirt paths where you had to watch out for tree roots. There were a couple of steep hills, but one of them had the most enthusiastic marshal at the bottom reminding everyone that they could do it. There was also one very steep downhill section which I just could not run down! 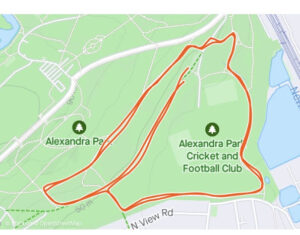 I did speed up a bit too soon for the final sprint as I didn’t realise quite how long we had run before joining the loop! 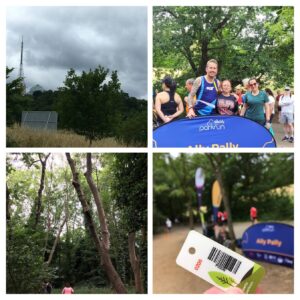 Scenes from the run, finish token and the 3 of us at the sign

Because the trains weren’t that frequent and I needed to get back (we had to pick up some medication from Watford hospital) we didn’t hang around for too long after, but of course we had the train journey home to chat together too.

It was such an enjoyable morning out- I would happily go back there, and I’d be interested to see their winter route too. I don’t mind hills (we don’t have that many flat parkruns in Herts) and it was very varied which made it interesting.

Which parkrun do you think has the best name?