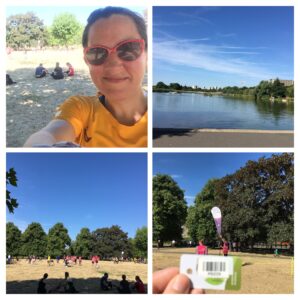 Burgess parkrun scenes including the lake that you run around

On the 15th July I was in London and so of course looked for a new parkrun to go to. Initially I had pencilled in Highbury Fields because it was fairly easy to get to (tube to Angel and then a mile walk up the high street), however due to the heat there were loads of issues with the trains and on Friday night when I checked, Angel station was closed and had been all day. I was also fairly near to Burgess (a couple of tube stops to Elephant and Castle, then a mile walk along Walworth Road), so opted for that. The journey planner said that the tube would only take 3 minutes, so I left later than I should have done. By the time I had walked through London Bridge station to the tube, time was getting on, and I came out at E&C at nearly quarter to 9! That didn’t give me a long time to get to the park and I was starting to panic about missing it. I thought I knew which way I needed to go as I’d looked at a map, but to be certain I looked at the maps on my phone but it was directing me to go a different way, so rather than risking running in the wrong direction I ran into a Sainsbury’s and asked a very helpful member of staff. Thankfully she pointed me in the right direction (the way I thought I needed to go until I checked my phone) and I made it to the park just as they called for the new runners welcome. Phew. 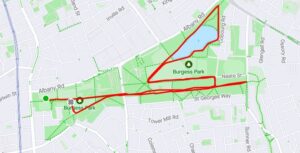 The route looked a little complicated online, and I had read on the excellent Blog 7t (amazing if you are a parkrun tourist) that you could get lost, but in the welcome they specifically said that you could not get lost on this course. Here’s hoping!

In fact it was pretty simple- basically a lollipop course, so out, around the lake, then back again. There were lots of marshals and I have to say that they were so enthusiastic (it reminded me of Ellenbrook Fields in that sense)- some of them were stood on benches but they were all whooping and cheering- not easy as some of them were in the full sun too.

As I got close to the lake the faster runners were heading back, but it didn’t ever feel congested (there were 322 runners that day to fairly busy). It was very hot that day, and the RD had warned everyone to take it easy. Some of the course had shade, but some was across open grassland so it was baking hot there. It is very flat though so on a cooler day it would be good for chasing a fast time. I somehow managed to finish in under 30 minutes which for a hot day was good for me.

In the out and back portion you ran through an underpass, and it had some interesting artworks, so once I had finished I walk/jogged back to take a look before heading back to the station. It had all these boats to commemorate the canal that was there (but had been filled in), some had things like wooden bottles carved into them (there used to be an R Whites warehouse in this location so it commemorated that too). I could also see The Shard across the park too- it really is quite central. 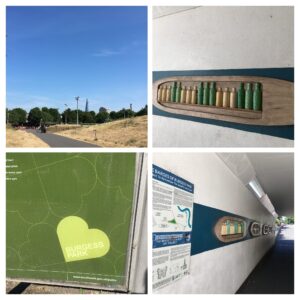 I was so pleasantly surprised by the park in general- I hadn’t been there before and didn’t know what to expect, but it had lots of interesting features including lots of wildflower meadows and flower beds, tennis courts, and a very nice looking café.  Check out Blog 7t if you want to find out more about the history of the park.

That was my 280th parkrun and my 86th different venue- ever so slowly creeping towards the next milestone!