It’s always sad leaving Florida, but what helped this year was knowing we would soon be back in the Disney magic, with a Bank Holiday trip to DLP.

We got the Eurostar over (my fave way to travel), and stayed in a hotel in the Val D’Europe area (either one stop on the train or around 20 min walk from Disney). 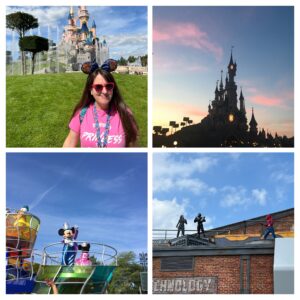 The 30th anniversary celebrations were still going strong, although as it was warm they were only doing the extended parade (with a big dance section in front of the castle) in the morning, with the other parades just being the traditional ones that keep moving. They have the catchiest tunes there!

It was also the end of Princess Week so we got to see some additional princess parades. When we had been before the Marvel Campus had not opened, so it was good to wander around there and see the superheroes on the roof, sample the new ride and food in the new restaurants.

As it was warm and open for long hours we headed in early each day and then went back to the hotel for a rest in the afternoon before going back for the evening. This worked well and meant we managed all the rides that we wanted to visit, plus we got to see the parades a few times, plus of course the awesome drone show before the fireworks. 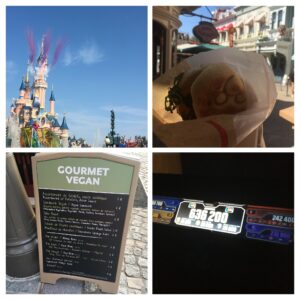 Parade finale, 30th celebration vegan panini, vegan stand in the studios and my winning score on the spiderman ride!

The food trucks were still in the studios too, so I was spoilt for choice with food options which is something I never thought I would say about France! 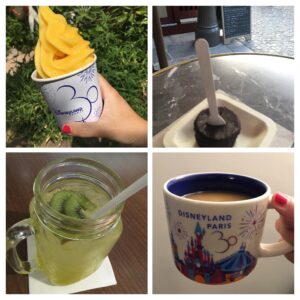 Of course we had plenty of Dole Whips (it was very warm in August), and had to have the vegan chocolate cake one day. Starbucks had the 30th mug in (it had been out of stock on our previous visits) so I was pleased to take one home as I do like those mugs- they are such a good size (huge) and stand up in the dishwasher well.

I was a little apprehensive about how I’d cope with the long days, as after avoiding covid for however long, I finally succumbed to it in the holidays and had it the week before we went to DLP (thankfully I tested negative really quickly)- it took a while to get my energy levels back after spending a few days totally in bed. I had packed my running kit, as I thought it was better to have it and not need it than wish I’d packed it, but as we ended up going in fairly early each day I took the kit home unworn.

The new Marvel campus is quite fun- there were random things happening like spiderman fighting on the roof of one of the buildings. One ride is a re-jig of the rock and rollercoaster (not something I would go on), but the other ride was really good fun- a bit like the Toy Story Mania in Florida-it had motion sensors so you had to wave your arms around and shoot the spider-bots. We finally found out that my arachnophobia is good for something as I got a much higher score than anyone else in the carriage!

Next up- spooky season!