Earlier in the year we had tickets for The Foo Fighters, but when Taylor Hawkins sadly died, the concerts of course were cancelled. Later on they organised a tribute concert so we got tickets for that.

I didn’t know what to expect, having never been to anything like that before, but it was amazing. It started at 4:30pm, and unlike normal gigs with warm up acts, it kicked off with Dave Grohl coming onto the stage and introducing the first act, Liam Gallagher singing along to the rest of the Foo Fighters playing. The full set list is on the NME website if you are interested, with Paul McCartney, Gaz Coombes from Supergrass, The Pretenders, Dave Grohl’s daughter singing and Taylor Hawkin’s son drumming, most of Queen, and then finishing with Foo Fighters. It was so constant, with maybe 5 minutes between before the next act came on. They showed some videos of people sending messages of love too (Elton John etc), and at times it was very emotional, but also a great celebration of his life. 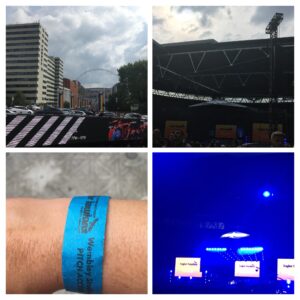 It was a wonderful tribute to his life.

After that it was back to work properly, so we ordered some of the gorgeous buns from Random Buns of Kindness as a first week back treat.

The second week in September we had a slightly different visit to London- this time for the London Podcast festival. We had tickets for Adam Buxton at Kings Place (which is a wonderful venue and right by Kings Cross so very convenient for us to travel in)- after we had booked tickets we found out that the guest was none other than his school mate Louis Theroux! How exciting! 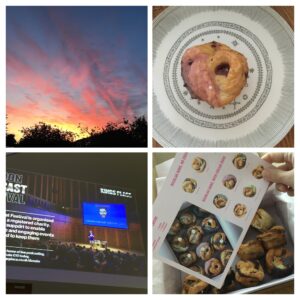 I am not sure when it will be released, but it was really funny and interesting- he is always worth a listen.