As previously mentioned, at the end of October we had a weekend in Norfolk. There were quite a few parkruns fairly close, but the most interesting to me was Blicking, at a National Trust venue. On the Friday drive up we stopped in Norwich and had dinner in The Waffle House (they do an amazing hummus and avocado waffle)- this would be good to combine with a parkrun if you were going to any of the ones in Norwich.

Even though our Air BnB was around 10 miles away from Blicking, it was a good half an hour drive through twisty country single track lanes- not my favourite! 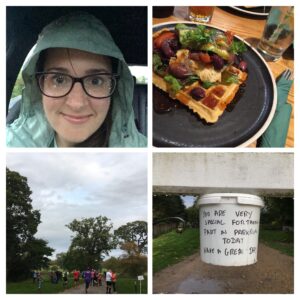 Wet in the car on the way, waffles from Norwich, parkrun token bucket and start area

As I walked to the car park I got absolutely soaked and I did consider going back, but I knew I’d regret it. I was dripping all over my notes for the journey, and the first bit of the drive was not fun as the lanes were full of huge puddles, but the rain eased off and when I arrived it had stopped raining altogether.

It was easy to find as I got closer as of course the NT has the lovely brown signs. The car park was nice and big (and free for members if you scanned your card) and the start was close to the car park.

The course was just under two laps, so the main briefing was close to the car park, and then we were all walked to the start, completing the just under two laps. It was through really pretty grounds, with views across fields, a section through wood and with some interesting buildings to see. The paths were fairly wide, it was undulating but nothing hilly. As it was nearly two laps you ran past the finish area on your first lap which was good too- lots of volunteers out clapping etc. 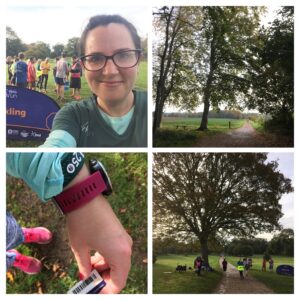 I got to use my new 250 band for the first time- I was so paranoid when I ordered it that I would have entered the incorrect barcode number, so I was very relieved when the results text came through!

89th venue visited and another very enjoyable one. There was a nice looking cafe (The Muddy Boots cafe- what a great name!) but I was heading back to breakfast with Andy. 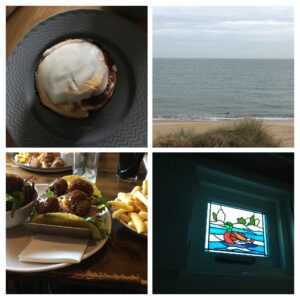 Tesco Wicked Kitchen cinnamon roll for breakfast, sea views, massive lunch and the pretty stained glass window in the place we stayed in

We spent the rest of Saturday exploring various parts of Norfolk- a walk along the coast to see the seals, an NT place actually called Horsey Windpump (it’s actual name- a sort of windmill that pumped water from the land) and then back to Blicking for a late (and huge) pub lunch and a walk around the water and through the woods. 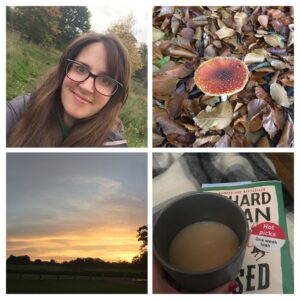 So, event 89 visited and hooray that my 250 band scanned! Much easier than flipping over the blue one (as the barcode is now on the outside but ICE details are on the inside).