Last Saturday (the first one of half term) we had to drive to Exeter and were originally going to visit Stourhead- the leaves at this time of year are meant to be amazing- but with storm Brian on the way they had closed the gardens, so we went to Montacute house instead. It had a cool wobbly hedge, and some nice gardens to wander through. 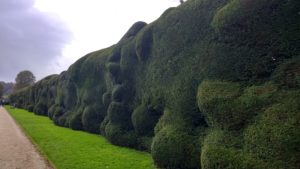 The traffic was pretty bad, so we headed into Exeter after that for a mooch around the town and dinner at Bill’s before going to our hotel, which was out in the middle of nowhere it seemed (single track roads to get there- we had some air miles which were going to expire and we could use them for the hotel- I don’t think we would have chosen it otherwise as it was a bit remote). 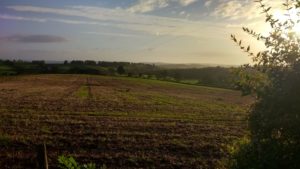 On Sunday we were up early to drive to the Eden project.

It was such a sunny day when we arrived. 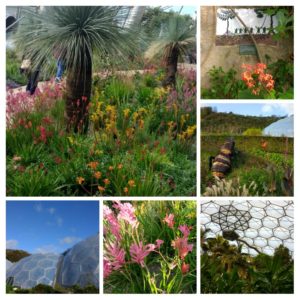 It was really interesting- there are these huge domes that contain plants from different parts of the world- we spent ages in the rainforest one. You could even walk up these wobbly stairs suspended across the roof to get to the very top (apparently a rainforest canopy walkway)- it was boiling up there! As it was half term they had some Roald Dahl themed activities going on, like a show about how to spot a real witch, but there was enough for us too. The food choices were not easy to find- they were a bit spread out and didn’t all seem open all the time- once I had eaten my (fairly nice but nothing special) beetroot and something wrap, I found the burrito stall which could have tempted me as it was cold. All the stands sold Pukka tea so I had a lovely lemon, ginger and honey tea to warm up with. 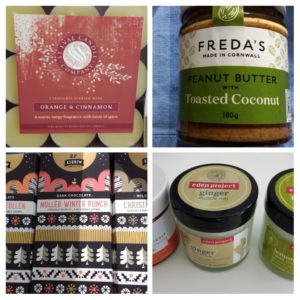 I also bought a few bits in the shop including ginger muscle rub (it warms as you rub it in) and lemongrass hand cream.

One of the exhibits was closed over the winter, and by the afternoon we felt we had seen it all, so we drove back via another National Trust place (Lanhydrock). 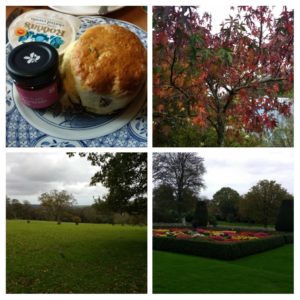 We had a walk around the huge grounds (filled with cows), walked through the house as quickly as is polite, and then went for a cream tea. I don’t usually go for cream with a scone (I usually go for just jam) but I had a little cream on top and it was actually really nice. I might have been converted. Maybe it’s a different type of cream?

Then we headed back to Exeter- we had cinema tickets that would expire, and the only thing that was on at that time (well apart from It which I do not want to see) was a film called Happy Death Day, which we thought might be funny. It was basically Groundhog day crossed with Scream. I am not a horror fan, but I don’t mind thrillers or black comedies (I just close my eyes in the tense bits)- this however, was just terrible. It made me feel so old-it was aimed at teenagers for sure. Plus the bits that were repeated were all terrible lines, so you had to listen to the same awful dialogue over and over. At least it was free (and out of the rain!). Afterwards we went to Pizza Express before heading back to the hotel- a busy day. 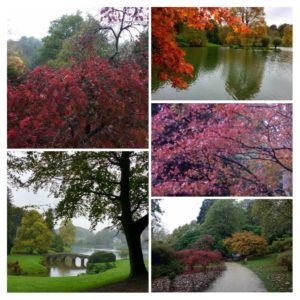 On Monday we made it to Stourhead- it really was beautiful there and well worth a stop. We’d bought some lunch to take with us and although it rained on the walk around the lake, it eased off for a bit so we could sit outside and enjoy our picnic before driving to the next hotel. We’d booked a spa hotel (Bowood, near to Chippenham- a free night from Hotel.com), and the spa was available for use for hotel guests, so after checking in we headed straight down. The pool felt a bit cold, so both of us (with incorrect logic) thought “we’ll warm up in the steam room first, and then swim”- no, that doesn’t work! I could only stand the steam room for a few minutes, and then of course when we got into the pool it felt freezing! After swimming for a bit, we used the sauna and the jacuzzi (which was extremely violent) before going for a final (and of course cold) swim. The pool area had huge windows overlooking the hotel grounds and golf course, so it did feel relaxing. They did treatments such as massages, but I’d had one on Friday so we just used the normal facilities. The hotel was not near a town, but it had a few options for dinner so we ended up in the Brasserie.

The next morning we had breakfast in the same place and then drove to Windsor to break up the journey home (we know a nice tea room in a garden centre…). As we had mainly sat in the car that day we walked the long way into town- it was about 4 and a half miles in the end- before braving the unpacking. Why does unpacking take so much longer than packing?

Are you a fan of a cream tea? Do you like using a steam room or sauna? Have you been to the Eden project? Apparently there’s a parkrun starting there soon, although I can’t work out where the course would be. What is the worst film you have seen at the cinema?