This weekend I was again off to do parkrun. Because of the summer, they were short on volunteers, as a lot of the regulars were away, so I had offered to do the tail running. My brother had decided to run it, so I did let him know he might be waiting for me for a while at the end, but luckily he didn’t mind.

Before we started, I had a quick chat with some of the club ladies- some of them were doing their very first 5k which was fantastic. One of them mentioned that I could give them encouragement from the back, but I don’t think they realised how far behind I would be! 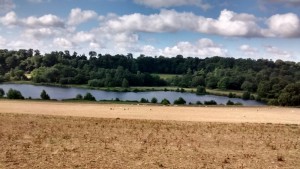 This field is full of sheep and lambs – later on we run down through it, towards the lake.

It was again, such a beautiful day. There was a couple walking (their children were running, and they had decided to come along and see what it was all about) so I had time to stop and take photos, as well as collect up the signs. 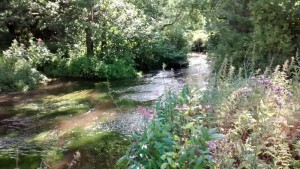 It was quite blustery, so in some places the signs had blown out of their metal clips. I was glad I knew the route so knew where to look out for the km markers and arrows. 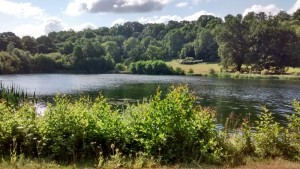 One of the marshals near the end ran back with me- she had been stood by this lake, which might be the prettiest spot. It’s a hard call!

In the end we reached the end in 53 minutes (53.01 was the official time)- we both went through the finish chute with the lady walker and showed her how it all worked. I think she was converted to visiting the park another time, and perhaps coming to parkrun again.

That was parkrun number 45 for me- getting closer to the 50!

I ended up walking loads on Saturday, because we had to walk a couple of miles to collect a parcel, and then later went into town and had another walk around. I went out for dinner with some friends (and then went to The Pudding Stop for dessert). Sadly, none of us could finish ours! Mine was a brownie with salted caramel sauce and peanut butter- so good, and brilliant running fuel (maybe).

This morning I had agreed to go on a club run- they meet at 8am on Sundays, and I have only been a couple of times. I generally don’t set an alarm on Sundays, and just head out when I wake up, but I was promised a lovely route, plus there was rain forecast so I thought I could get out before it started, and at least have company if it did rain.

The route was very pretty- tracks, field, stiles to climb and country roads, a few very tough hills but because there was a group of us we would wait at the top to catch our breath and enjoy the views. The rain started gently at first, after about 6 miles, and then for the final mile it got harder and harder, but at least we had the end in sight by then. I was so cold by the time I got home (and I had packed a jumper in my car to wear for the drive home).

After a hot shower, pancakes, hot tea (that sounds so American!) and 30 Rock I was feeling a bit warmer.

Oh, and some exciting TV news- first of all, if you subscribe to Amazon Prime, The Amazing Race (actually a good reality TV show- teams race around the world and complete challenges along the way) is going to be on there. And, I saw an advert for Parks and Rec on Dave starting this Monday I think- (you can see Chris Pratt before he was big…)- Amy Poehler is in it, which is basically like saying Tina Fey is in it, which means it is brilliant. I think I have linked to the “Treat Yo-self” day before. So, if you want some fun TV, give either of those a go.

Any TV shows that you love? We have been watching old 30 Rock episodes again, and It’s Always Sunny in Philadelphia (look here for some crazy quotes for some idea of how bizarre it is…)- they are always guaranteed to lift my mood and have me laughing out loud.

8 thoughts on “More tail running and some TV”